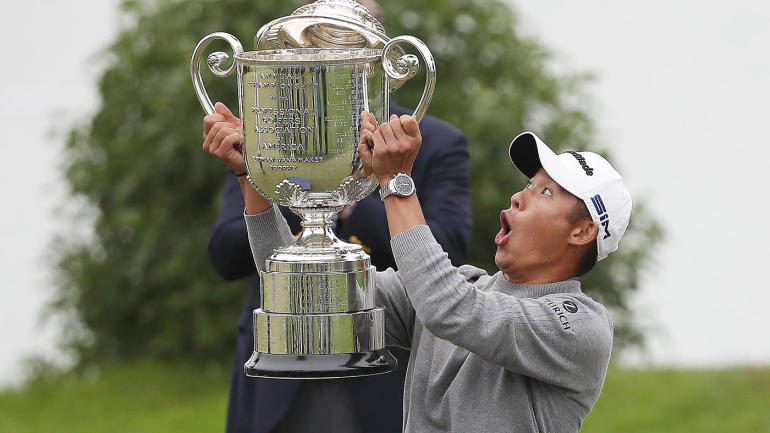 Collin Morikawa hoists the Wanamaker and loses the trophy's lid.

Collin Morikawa stunned a half-dozen serious contenders late Sunday afternoon at the 102nd PGA Championship with a sensational shot that will go down as one of the finest in the history of major championship golf.

Morikawa hit that unforgettable shot on the 70th hole of the championship — the short par four 16th where he hit the ultimate perfect drive.  It was a high fade that landed just short of the green, took four bounces then rolled up on the putting surface and stopped just seven feet from the hole.  He finished it off with the eagle putt that set up the first major championship victory for the 23-year-old rising star.

The drive was reminiscent of the tee shot he hit at the 14th at Muirfield Village that helped him win the Workday on July 12.

“I actually did,” Morikawa admitted when asked if that shot from Muirfield entered his mind before he hit that magnificent drive at 16.  “He (Caddie J.J. Jackovac) looked at me and asked me what I wanted to do and I told him, let’s hit a good drive,” Morikawa said. “I counted back from 14 at Muirfield. What’s the different from 14 at Muirfield and this shot, similar numbers, wind was a little left, kind of into me, but I knew I had to hit a good one.  Fourteen at Muirfield was pretty special.  I hit a really good shot (at 16) then made the putt (for eagle) and here we are,” he said as he got ready to hoist the Wanamaker Trophy.

As he lifted the massive trophy, it tilted and the lid flew off, startling Morikawa.  It was his only fumble of the day.

The first-year star who went to school at nearby Cal-Berkeley, began his final run to victory at the par four 14th.  He hit a poor second and left himself about 55 feet short of the hole, off the green.  All he did was pitch his third in for birdie to get to 11-under par.

To that point, it was a free-for-all on the back nine at Harding Park.  At one time, there was a traffic jam of players at 10-under par including overnight leader Dustin Johnson, Scottie Scheffler, Paul Casey, Tony Finau, Bryson DeChambeau Jason Day and Morikawa.  Matt Wolff was already in at 10-under after shooting 66.

It was obvious that 10-under wouldn’t win and 11-under might go to a playoff.  Morikawa blew past that when he holed that short eagle putt from seven feet,  one-inch, to be exact.  That took him to the winning score of 13-under.  After that, he nearly birdied the 17th then watched anxiously as he pulled his approach to the 18th, pulled it to where it landed just past the pin and settled a comfy 18 feet from the hole.  He lagged to six inches and had the world’s easiest tap-in for victory.

“It’s amazing, it’s been a life goal.  To come here to San Francisco where I spent four years here (Cal-Berkeley), it’s pretty special,” Morikawa said, flashing a huge smile after putting an incredible final round 64 on his scorecard, a card that had four days of sub-70 scores (69-69-65-64).

Casey, who shared second with Johnson (11-under), saw Morikawa’s tee shot at 16 and later paid him homage.

“I played wonderful golf, simple as that,” Casey said.  “What a shot he (Morikawa) hit on 16.  What a shot, nothing you can do but tip your hat to that.  He took on the challenge and pulled it off.  That’s what champions do.”

What’s even more impressive is that this was Collin’s 29th professional start.

Another guy won his first major at his 29th professional start.

That was Tiger Woods at the 1997 Masters.