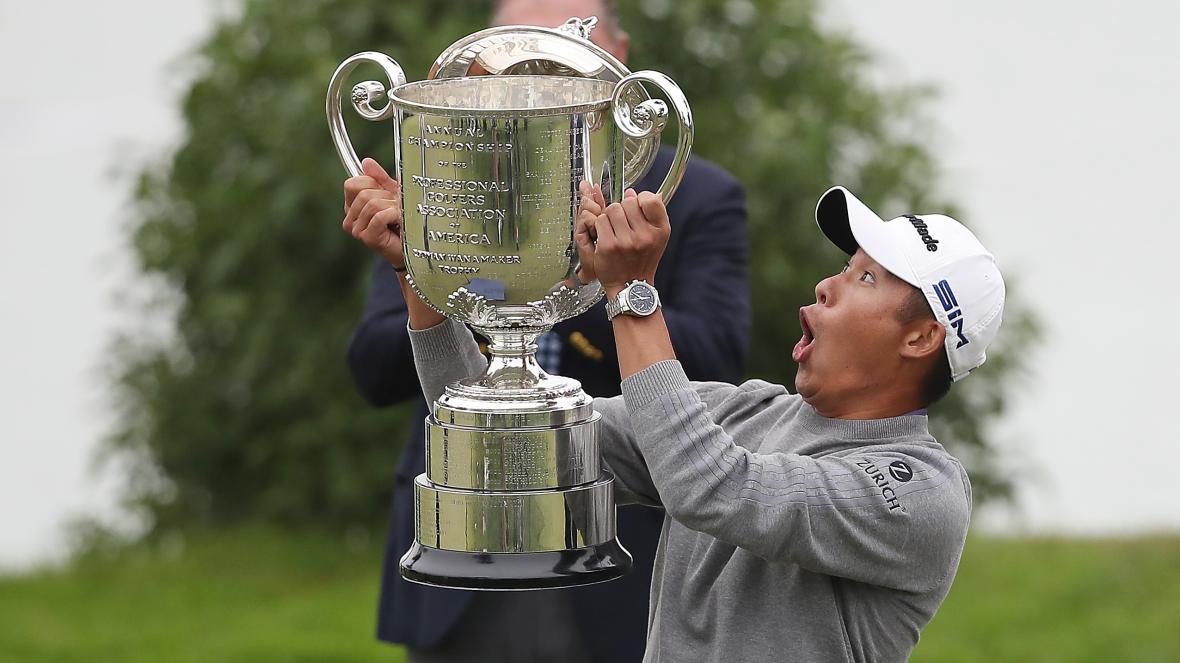 Good news for Collin Morikawa is that the U.S. Open trophy is a lot easier to handle.

Today we dive head-first into that dangerous, shallow pond of prognostication.  Predicting contenders for any of golf’s major championships is risky business at best.  But such tasks are inevitably necessary and at best, expose the inexact science of trying to predict any sort of outcome.

So without further hesitation, let’s get to it and see who may or may not succeed this week at that venue that is historic, difficult, sometimes quite nasty — Winged Foot, host venue of the United States Golf Association’s 120th United States Open Championship.

Collin Morikawa:  For Winged Foot you need control and a game plan and Collin showed us at Harding Park he can stick to his plan, keep his ball in the short grass, hit greens and make a few birdies.  He also showed on Sunday that he doesn’t fear the big moment.  It will take that kind of moxie at Winged Foot.  He’s cool, calm and calculating.

Xander Schauffele:  The “real winner” of the Tour Championship.  Xander has played in exactly three U.S. Opens and here’s how he’s finished:  T5 in 2017, T6 in 2018, T3 last year.  The trend is your friend.  Like Morikawa, he’s cool, calm and collected.  Nice kid too.

Dustin Johnson:  Once again, The Trend Is Your Friend and no one has been trending upward like D.J.  Has a U.S. Open title and primed for another.  Should be in there come Sunday.

Jon Rahm:  Drives it well enough to avoid big numbers and we feel that this week at Winged Foot will be all about “Disaster Avoidance.”

Paul Casey: How’s this for our surprise pick in the First Tier?  Perhaps one of golf’s most under-rated players.  Would be great to see him land a major.

Webb Simpson:  Mr. Control and you better have some control over your golf ball this week.  Did we mention he’s won the U.S. Open?

Rory McIlroy:  My neighbor Lucy LOVES Rory but I keep telling her:  “Lucy, Rory will always disappoint you.”  Hopefully Rory can control his right-to-left ball flight, which isn’t ideal at a place like Winged Foot.  He’s a new dad, now he has a family to play for.

Brendon Todd:  Like Webb, he is a control player and he’s resurrected his career.  Hung around at Harding Park.  Probably not ready for prime time but good enough to join the supporting cast.

Justin Thomas:  He’s No. 1 on a lot of lists.  J.T. should contend but lets a drive or two get away from him at the wrong time.  Has his old reliable, Jimmy Johnson, back on the bag this week.

Bryson DeChambeau:  Don’t try to overpower the powerful and Winged Foot is damn powerful.  If Bryson can figure out how to play a more tactical game, he can be a factor.  If he wants to smash and gouge, well, good luck with that Bryson.  Good news for him is that the USGA embraces five-plus hour rounds in the U.S. Open and that works right into “The Snail’s” wheelhouse.

Adam Scott:  First Tier ball-striker with a “Long-Shot” broom-stick of a putter.

Patrick Reed:  Has dropped in the “Villain World Rankings” thanks to Bryson DeChambeau.  His game’s been off, dropping him down the charts.

Justin Rose:  Has won the U.S. Open, knows what it takes.

Phil Mickelson:  As Phil says in the new Callaway ad:  “When have I ever let you down at Winged Foot?”

Tony Finau:  Always in  the running for:  “Best Supporting Golfer In A Major.”

Tommy Fleetwood:  Tommy couldn’t beat a bunch of no-names in Portugal last week so why should we expect him to beat a bunch of big names at Winged Foot?  Hate that new putting grip, it’s the one good putters switch to when they can’t putt anymore.

Patrick Cantlay:  This guy has sort of vanished.

There you have it, our breakdown of the field.

But if we had to pick the “Real” winner this week?