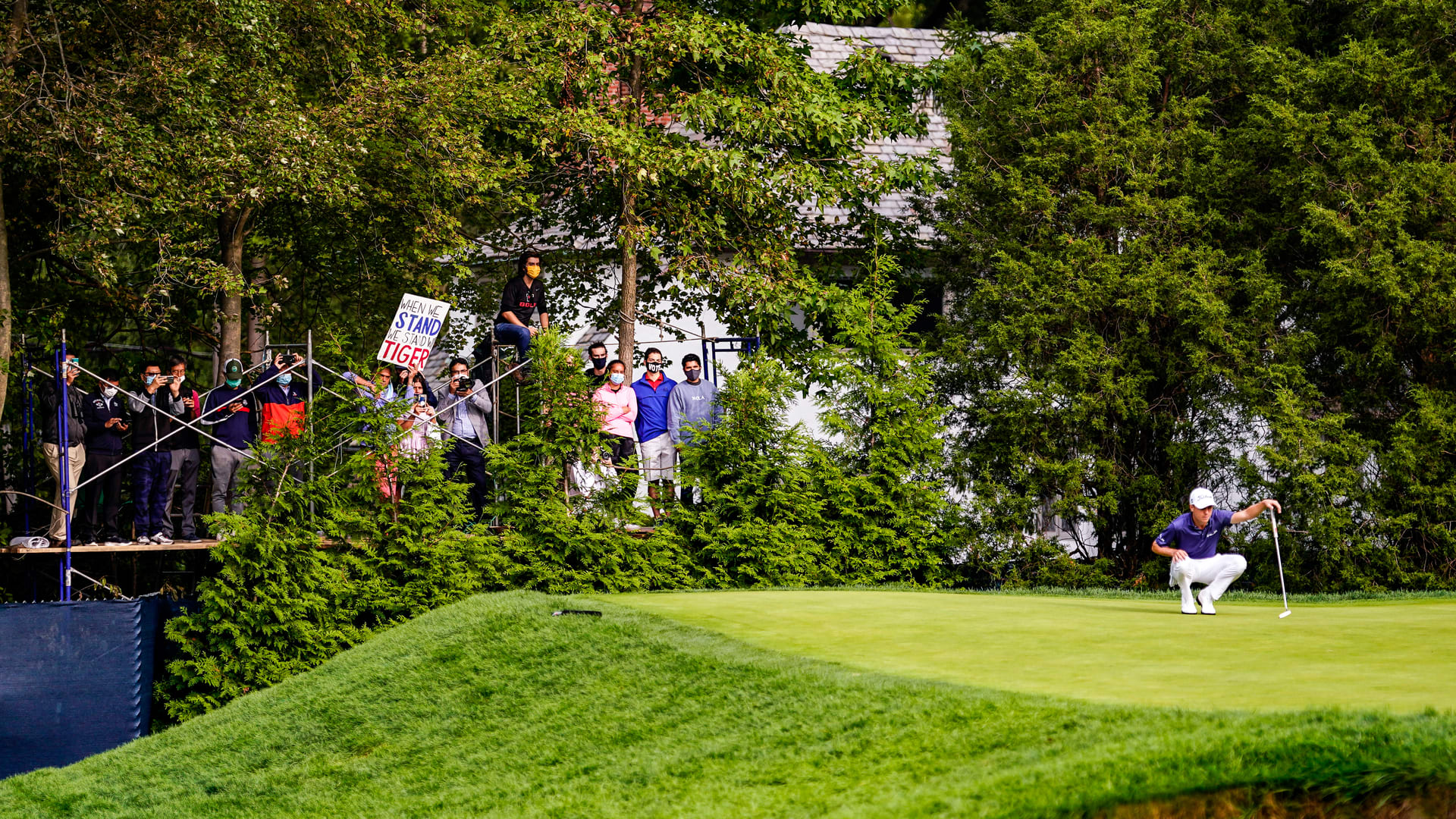 No spectators? These fans improvised to see Justin Thomas on Thursday.

It is a day that begins long before dawn and ends after sunset and sometimes that isn’t enough time to finish the story.

Day one of the 120th U.S. Open at Winged Foot had more twists and turns than a John Grisham novel but by the time they ran out of light, there was one man who stood above the rest.

Justin Thomas played the perfect lead role.  The world’s No. 3, playing with buddy Tiger Woods and PGA champ Collin Morikawa looked every bit the part of a man with all facets of his game in perfect working order.

J.T. finished in that morning wave and set the bar high — by the time he rolled in a tasty 18-footer for birdie at the home hole, he put up an unthinkable 65.  Yes, 65.  No one is supposed to shoot a five-under par 65 at Winged Foot, not on day one or day two and certainly not on Saturday or Sunday.  But Thomas did exactly that — six birdies, a single bogey and the man who has a PGA Championship on his resume is making his bid for a U.S. Open title.

But there were all varieties of sub-plots on a day where 144 players went out — a slimmer field, thank goodness or more would have been stranded at dark.

There are plenty of big names in this hunt early.  Masters champion Patrick Reed hit a perfect nine-iron at the par three seventh that took one hop and his ball planted itself in the bottom of the cup.  Reed used the momentum from that ace to shoot 66 but by the afternoon wave, he had company.  Matt Wolff, the human chatterbox, matched Reed’s four-under score as did Thomas Pieters from Belgium.  Wolff’s in his first U.S. Open, Pieters hasn’t played all that well over in Europe since its restart.  They were two of the sub-plot surprises.

First rounds at U.S. Open are made for multiple surprises.

Will Zelatoris, best player from the Korn Ferry Tour, matched Reed’s ace at the seventh and nearly made another at the par three 13th.  His ball was tracking to the hole, hit the stick but didn’t go in.  Odds of him making two aces in the same round at a U.S. Open are astronomical.  Will finished with an even par 70.

Rory McIlroy looked extraordinarily relaxed and it showed in his score.  Rory’s 67 had Irish eyes smiling, and Rory was smiling with them.  The world’s No. 4 said if you offered him a 67 at the start, he would have taken it and not ventured out.

Then there was the world’s No. 1 — Dustin Johnson.  D.J. had taken his game into rarified air the past month but on Thursday, he fell hard from Mount Olympus and his round of 73 left him floundering with Tiger Woods and a swarm of no-names.  No. 2 Jon Rahm kept himself in touch with the leader with 69.

Want more surprises?  Lee Westwood, who couldn’t win a major in his prime, shot 67.  Louie Oosthuizen won one major, the Open Championship.  He joined Rory and Westy with 67.

Want more surprises?  Amateur Davis Thompson, a senior at the University of Georgia, had the solo lead at one point on Thursday.  He was the first guy to get to four-under.  He didn’t stay there, made some bogeys coming in but still managed an eye-opening 69 and he can go back to school and tell everyone how he clipped Tiger Woods and D.J. by four shots at a U.S. Open.

What will happen next is that Winged Foot will get nothing but tougher.  This was the easy day.  The USGA can get these greens as firm as they want.  There are sub-air systems underneath the greens that can virtually suck all the moisture out of those putting surfaces.

Maybe, just maybe, all of those 21 players who shot under par on the first day will pay attention to one of Murphy’s Laws Of Warfare:

“If your attack is going really well — it’s an ambush!”