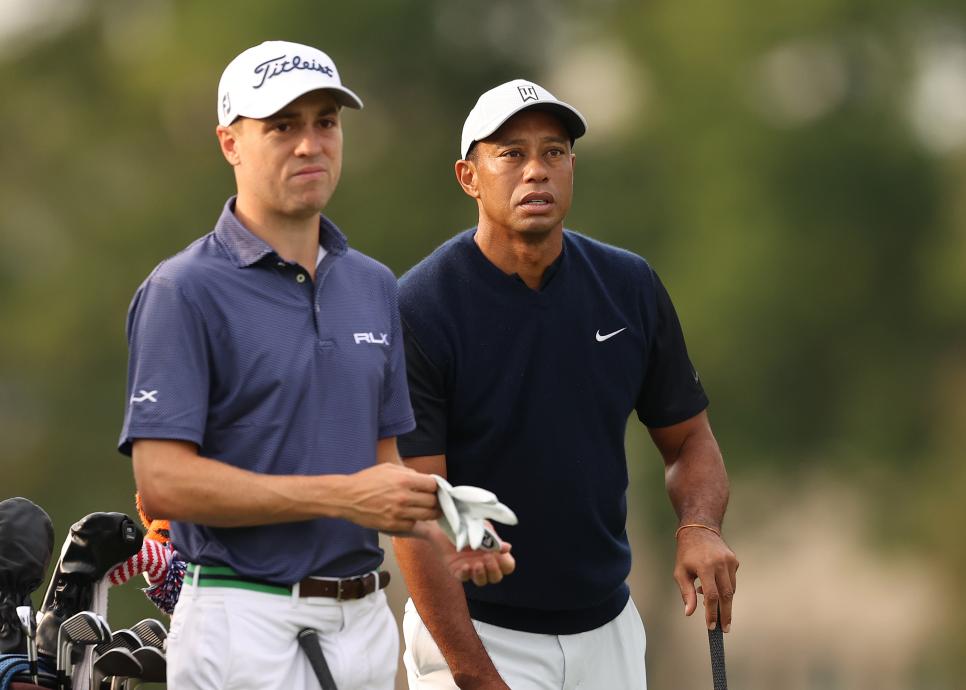 The conditions were perfect for Tiger Woods early Thursday morning at Winged Foot as he began his first round at the 120th U.S. Open shortly after 8 a.m.

It was warm, no wind, receptive greens — the field had a chance against a course that was supposed to devour the players alive.

Tiger started with three straight pars but bogeys at the fourth and fifth got him going in the wrong direction.  He bounced back with birdie at the sixth, took another bogey at eight but a birdie at the par five ninth had him just one-over at the turn.

But Woods was missing fairways and that’s not a good thing at Winged Foot.  Birdies at 10 and 11 got the three-time U.S. Open champ under par for the round — things were looking good but once again, missed fairways would take a toll.  Things see-sawed from there, three bogeys and another birdie had Tiger even with just two to play.  But a missed fairway added up to bogey at 17 then at 18, he hit a nice approach from the deep rough that left him just short of the green.  Surely he’d get up-and-down to post 71.

Then came the most shocking shot of his round.  Woods totally chunked his third.  Yes, flat-out chunked it and it rolled back off the green, just a few yards in front of where he hit his third.  His fourth wasn’t close enough and he missed the bogey putt.  A double-bogey six for 73 and Woods looked weary as he walked off the green.

“It was a bit of ebb and flow to the round today. I did not finish off the round like I needed to. I made a bunch of putts in the middle part of the round. It seemed like most of my drives on the front nine landed in the fairway and ended up in bad spots, and I tried to stay as patient as possible, and unfortunately just did not finish off my round the way I needed to,” Woods lamented afterward, the disappointment was on his face and in his voice.

His stats told the tale.  He hit just six of 14 fairways, only nine of 18 greens with 29 putts.  The putter was perhaps the best part of his game on opening day.  Tiger rolled in a couple of birdie putts in the 35-40 foot range but it might have been a miss at the par five 12th that hurt him most.  He had a 10-footer for birdie, seemingly hit it perfect, he was walking it in and BAM, massive lip-out.  It would have been a fourth straight birdie and he went on to bogey the next two holes.

The lip-out was cruel but golf often evens things up.  The 40-footer he made for birdie at the 16th hole was moving quickly and if it hadn’t hit the cup square — it would’ve rolled, easily, another 10-12 feet past the cup.

He played with pal Justin Thomas, who had a stellar day.  J.T. clipped Tiger by eight shots on his way to the first round lead.

Tiger did get the better of world’s No. 5 Collin Morikawa, who was off for most of the day and could be headed home if he doesn’t do a heckuva lot better than the 76 he posted.

As for Woods, depending on Friday’s set-up, he’ll need to get a bit closer to par to stick round for the weekend.