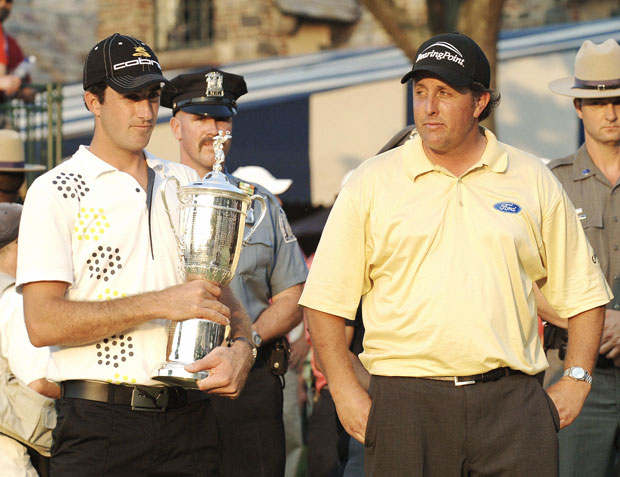 Check out the look on Phil Mickelson's face.....wonder what he was thinking?

It’s a really good sort of bully in the fact that it doesn’t allow world-class players to have their way with the historic course.

If it were a street fight — pick Winged Foot.

Golf’s elite assemble once again to take on this magnificent beast of a golf course this week in Mamaroneck, N.Y.  It has a very storied resume of not taking any lip from anyone — no matter what your name.  Nicklaus, Woods —  doesn’t matter, it will hold its own no matter who’s trying to negotiate those narrow fairways, the troublesome rough and deep, deep bunkers that protect those slippery-slope putting greens.

You better have a plan — as in fairways and greens and try and get a birdie every now and then.  Birdies are handed out like entitlements on the PGA Tour, at Winged Foot, you have to get them the old fashioned way — you EARN them.

But before we look forward, we need to look back to understand the task at hand this week.

Winged Foot took no prisoners in 1974 by the time Hale Irwin was finished, he shot round of 73-70-71-73 for a winning total of 287 — seven over par.  He won a whopping $35,000 for enduring four days of major championship torture.  He was two shots better than Forrest Fezler.  Fezler closed with an amazing even par round of 70, shot nine-over ad pocketed $18,000.

After Johnny Miller scorched Oakmont with his final round 63, the starched shirts at the USGA were generally pissed off and took revenge with the setup at Winged Foot.  It was so difficult that Dick Schaap authored a book that documented a minute-by-minute recounting — “The Massacre At Winged Foot.”

The USGA has let the best players in the world off the hook a bit but this week may be a brutal test compared to your basic PGA Tour event.

When the U.S. Open returned to Winged Foot 14 years ago, it was pretty much a survival test, not all that different from 1974.

It boiled down to a more-than-memorable 18th hole, the 469-yard par four that proved the Waterloo for Phil Mickelson, Jim Furyk and Colin Montgomerie.

Mickelson had his chance to win his first U.S. Open but Lefty flared his tee shot way left and would finish with a double-bogey six that left him at six-over par.

He wasn’t alone.  Furyk made bogey there, shot 71 and missed a playoff with Ogilvy by a shot.

Montgomerie was sitting at four-over through 71 holes and put his tee shot in the middle of the fairway.  Monty then flared what was basically a stock, driving-range six-iron and he’d finish with a double that gave him a 73 and landed him in the runnerup spot with Mickelson and Fuyrk.

The man who decoded 18 was Paddy Harrington.  Paddy birdied the 72nd hole for 71 to finish at seven-over.  How much would Mickelson, Furyk or Montgomerie have paid for that birdie?

The Beast Of The East:

Which brings us to this week — the 120th U.S. Open.  What awaits the players is a monster of a course.  You want length?  Check out these distances:

That is one nasty, nasty course.  Throw in some thick, juicy rough and we don’t care how far Bryson DeChambeau can hit it, in fact, doesn’t matter how far you drive it if you can’t find fairways.

As for those greens?

Suffice to say Nicklaus putted his ball off the first green back in 1974 and that 18th has the nastiest false front of all the greens.

Jon Rahm visited Winged Foot a couple of weeks ago and didn’t believe anyone would shoot under par.

Next episode:  We’ll break down the contenders.