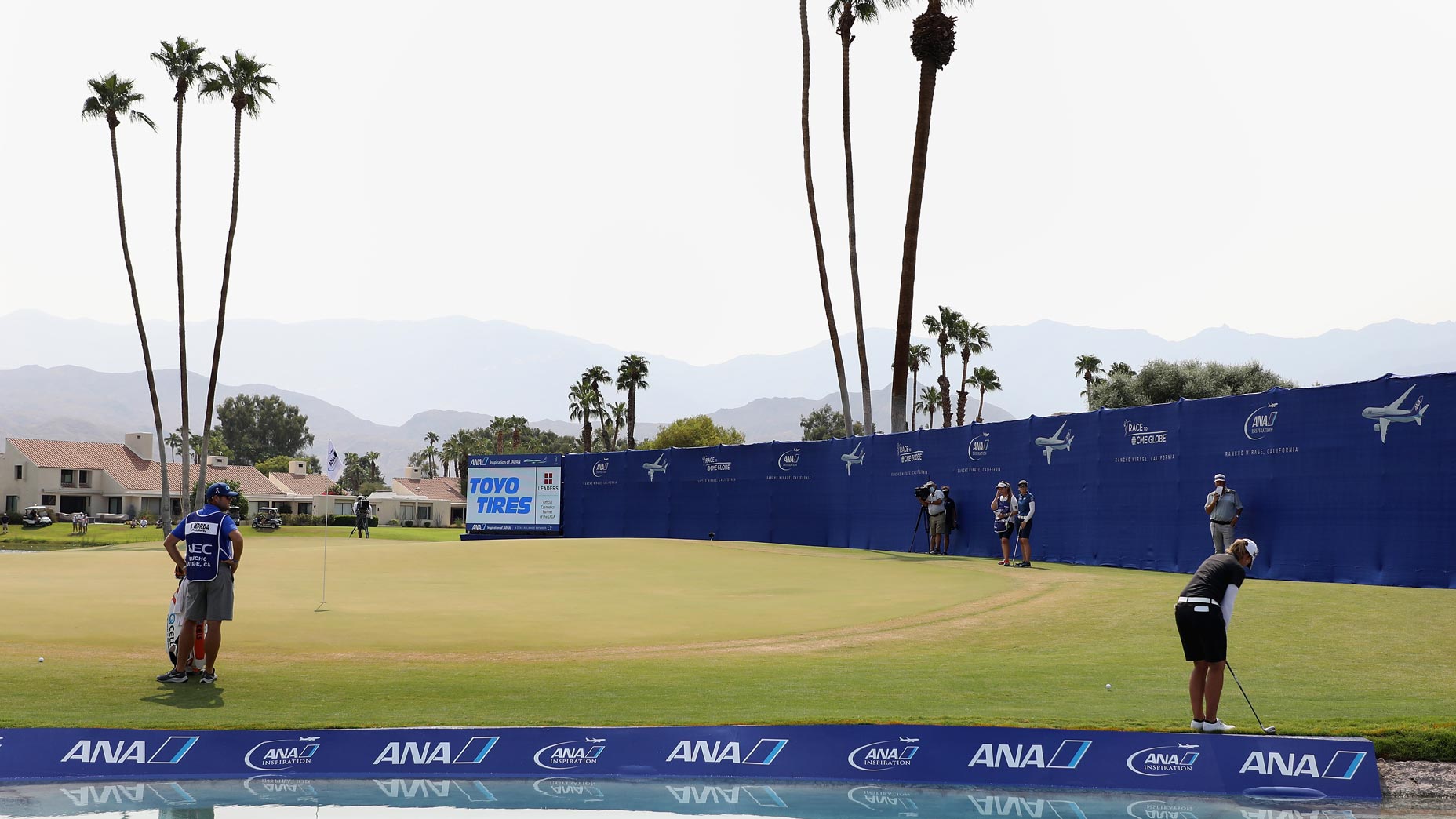 There are usually spectator stands behind the 18th green at the ANA Inspiration.

“The Wall” Behind 18th Green Still The ANA Post-Event Buzz

They’re still talking about the ANA Inspiration, but the talk is about that big blue wall behind the 18th green that basically served as a “backboard” for tournament winner Mirim Lee.

Normally there are spectator stands behind the 18th green at Mission Hills but last week there was simply a big, blue wall that would stop shots from going over the green, into the water behind the green.  What you have at the 18th in the ladies major, is basically an island green that isn’t really an island.

So if there were no spectators last week, why was there a giant blue wall?

The wall played a prominent part in the outcome of the championship.  Last Sunday, Mirim Lee bounced her second off the wall, took the allowed free drop then pitched into the hole for an eagle three at the par five and tied for the lead.  She went on to beat Brooke Henderson and Nelly Korda in a three-way playoff on the same hole.

The LPGA didn’t want to comment on the wall, except to say that it’s no different than the hospitality structure that has been there in the past.  Seriously?  There weren’t any seats.

Television analyst and Hall of Fame member Judy Rankin had some thoughts on the artificial obstruction or backboard, if you will:

“I believe these players are talented enough and have enough course management skill to have dealt with the hole without that wall,” said Rankin. “How can you play a dangerous shot to a green that is surrounded by water and manufacture making only 50 percent of that danger in play?  Keep the green reasonably playable and let them handle it.”

The Portland Classic has been reduced to a 54-hole event due to deadly wildfires burning in the Pacific Northwest.  The LPGA made the decision on Tuesday.

Ten deaths have been confirmed during the past week in Oregon, the latest flash-point in a larger summer outbreak of fires that have put harmful levels of smoke and soot into the region’s air.

“As we have said throughout recent months, 2020 has been the year of health and safety, and this situation is no different,” said Heather Daly-Donofrio, the LPGA’s Chief Tour Operations Officer in a statement. “Our meteorologist says that it is unlikely that air-quality conditions will improve before mid-day Thursday and we cannot risk the health of our players, staff, volunteers, broadcast crew and others at the golf course.  This is not a choice we made lightly, but we are confident that this is the right decision.”

The LPGA said the Edgewater Country Club in Portland, Ore. remains closed and the Pro-Am scheduled for Wednesday is cancelled.

Canada’s golfing sweeheart, Brooke Henderson, withdrew on Monday, citing Portland’s poor air quality.  On Monday, the LPGA Tour shut down the course and practice facilities and there was a dense smoke advisory issued for the city.

The third of the three-event “Iberian Swing” on the European Tour will begin play Thursday at the Royal Obidos Resort.

Adrian Meronk from Poland won the event last year when it was part of the Challenge Tour schedule.

In the new Rolex World Rankings, Nelly Korda is now No. 2, jumping over Danielle Kang, who checks in at No. 3.  Jin Young Ko, who is staying put in South Korea, is still in the No. 1 spot this week.  What we have are two Americans ranked among the top three players in the world.