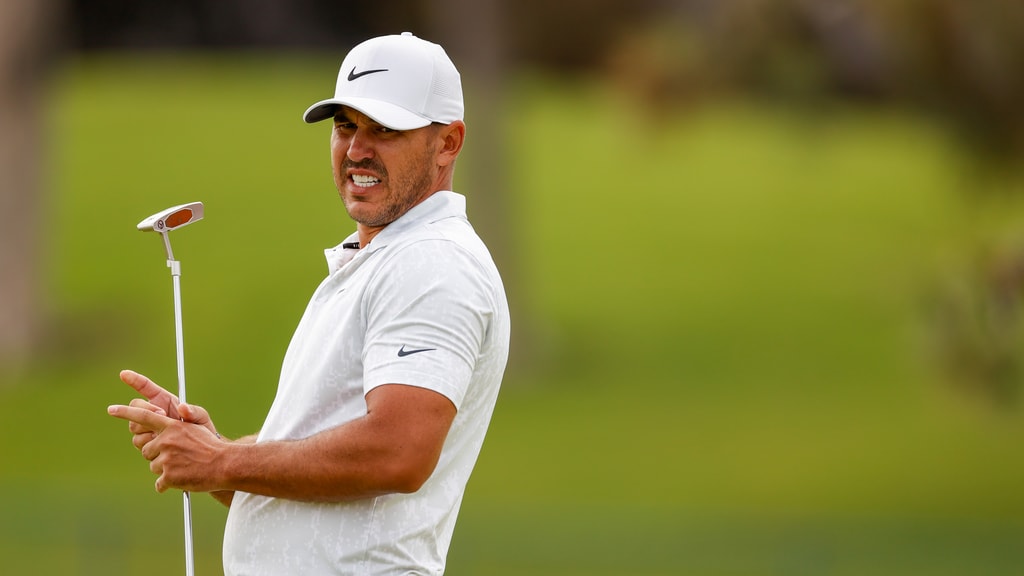 Brooks Koepka's 69 put him two back of leader Russell Henley.

The early going at the 121st U.S. Open belonged to the San Diego fog and late in the day, it was sunset, but in between,  Russell Henley stepped up and claimed the temporary day one lead at Torrey Pines with an impressive four-under par 67.

That early morning fog set everything back some 90 minutes and that meant the field would not beat the fading light, leaving some contenders having to return early Friday to finish.

But Henley was one of the lucky ones who finished and played well.

So maybe even Henley surprised himself with his opening day performance on the tough and tricky South Course at Torrey Pines and afterward admitted: “I’m still trying to figure it out,” meaning figuring it out as far as U.S. Opens go.  It would be a shocker to find Henley anywhere near the top on Sunday.  He hasn’t won since 2017 at the Houston Open, and that is a far different sort of “Open” from this one.

Two huge names, two pre-tournament favorites were lurking just two shots off Henley’s pace.  Yeah, Brooks Koepka’s at it again.  He looked totally at ease during his first round.  His only two bogeys came when he hit two badly pulled iron shots — that was it.  The rest looked dangerous for the rest of the field as Koepka had his major championship “game face” on all day.

Xander Schauffele is playing just 30 miles from where he grew up but the home-court pressure didn’t bother him. The “X-Man” was up there with Brooks at two-under and this week has special meaning for Schauffele.  “I’ve waited a long time to get here. In 2008 I witnessed history,” said Schauffele, who was in the gallery when Tiger Woods captured the 2008 title.  Now Schauffele is back as a local favorite/hero.  “You’re dealing with expectations.  I played in the Farmers (at Torrey Pines)front of friends and family so it’s not too crazy.”

Henley had company at the top when the first round was completed early Friday morning.  South African star Louie Oosthuizen, the 2010 winner of the Open Championship and a runner-up five times in majors finished par-par and joined Henley at the top at four-under.

The over-riding theme of day one is that there are a lot of big names in the hunt.

Joining Koepka and Schauffle with a two-under par 69 was overwhelming favorite and betting-odds pick to win this week — Jon Rahm.  Rahm, who had to withdraw from the Memorial and isolate due to a positive COVID test, is back at full speed and looked spot-on during his first round.

Hideki Matsuyama did his best for a “don’t forget me” round as The Masters champion put himself near the top, joining Rahm, Koepka and Schauffele with his own round of 69.

Memorial winner Patrick Cantlay was one-under for his round with two holes left to complete on Friday morning.

Tyrrell Hatton was low Brit with 70, his countryman, newlywed Lee Westwood shot even par 71 along with Paul Casey and world’s No. 1 Dustin Johnson played well enough to shoot even par.

Even Rory McIlroy, who typically has a tough time in the first round of major championships, put himself in good position with a 70.

The biggest name who struggled was defending champion Bryson DeChambeau.

Bryson’s bomb-it and gouge-it strategy from Winged Foot didn’t work all that well on day one, as the sun sank in the west, Bryson finished with a 73 and he had to birdie the 18th hole to shoot two-over.

At every U.S. Open, there are always first-round surprises and those came in the form of 2018 Open champion Francesco Molinari and Rafa Cabrera Bello, both shot three-under par 68s.  Molinari has been missing in action long enough that they’ve put his face on milk cartons back in Italy.  As for Bello, he always wins the “best-dressed” award, has a lot of game but his collar tends to get a little tight on Sundays.

What every player will tell you is that there’s a long way to go before this championship is decided.

It’s the U.S. Open where anything can, and often does happen.