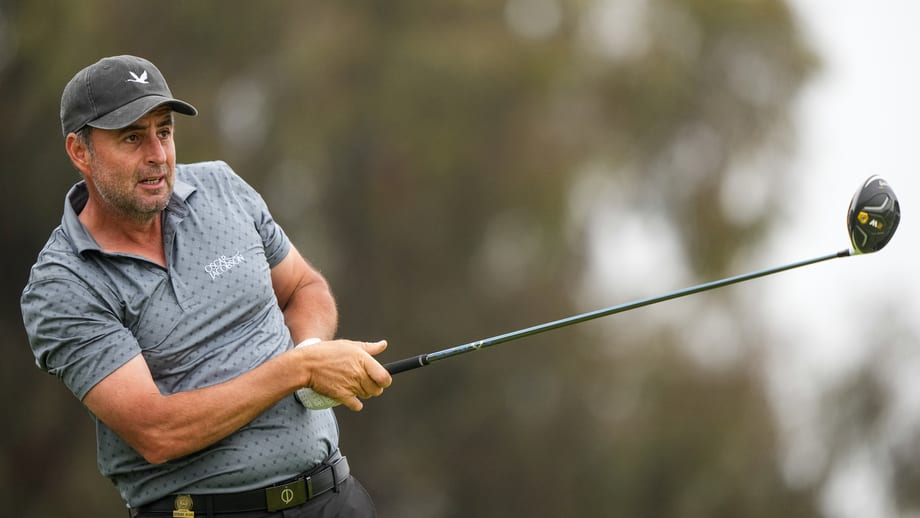 There are more questions than answers with Bland (70-67) and Henley (67-70) both in at five-under par at the halfway mark of the season’s third major championship.  This is only Bland’s fourth major and he’s 48-years-old while Henley hasn’t exactly been proficient in major championships.

Can the two of them keep their heads above water on the trying South Course?

“Over the moon,” was how Bland described his state of mind after turning in a four-under par effort early Friday.  “I’m gonna try and enjoy it the best I can.  I’m here to compete.  If I can keep doing what I’m doing, and I know that’s a cliche, but I think I can be in it come Sunday,” said Bland, who is the oldest 36-hole co-leader in U.S. Open history.  He won his first European Tour title last month at the British Masters after 478 events.  He’s the pure definition of a journeyman but he’s managed to get the job done.

As for Henley (67-70), he likes the conditions.  “The course has firmed up which is to my advantage.  It’s such a marathon.  There’s so much golf to be played.  Patience is what I’m trying to have out there,” added Henley, who had just one bogey on Friday and it came in the form of a three-putt on his final hole of the round.

But these two eyebrow-raising co-leaders have their work cut out for them.  Just take a look at some of the names lined up behind them:

Louie Oosthuizen (67-71):  Probably the best pure golf swing among the contenders.  His putting wasn’t as good on Friday as it was on day one.

Matt Wolff (70-68):  After taking two months to get his mind well, Wolff said he’s a walking statement for the importance of mental health in sports.  “I’m happy in life off the course and that translates over to the golf course,” said Wolff, who got his taste of the hunt last year, going head-to-head with Bryson DeChambeau.

Jon Rahm (69-70):  If you’re looking for the guy most likely to hoist the trophy on Sunday, this is your man.

Xander Schauffele (71-69):  The hometown kid will have huge support over the final two days.  Would be an incredible story if he returned to win on the course where he watched Tiger win 13 years ago.

Kevin Streelman (71-69):  On of the Tour’s steady-eddies.  Not sure he’s the guy to hoist the trophy on Sunday.

Mackenzie Hughes (73-67):  Another Cinderella in the hunt.  They’re excited up in Canada.

Patrick Rodgers (70-71):  Same boat as Scheffler — not sure his first win will come here.

Brooks Koepka (69-73):  Really struggled on Friday, hit only five greens.  Will have to be firing on all cylinders over the final 36 but along with Rahm, probably one of the most dangerous competitors.

Bryson DeChambeau (73-69):  Now that he and Brooks are both at even par, perhaps they’ll be paired sometime over the final 36.  Bryson got it going on Friday.

Collin Morikawa (75-67):  Best bounce-back among the contenders.  Missed a seven-footer at 18 for a 66 but he’s getting in the groove.

Harris English (72-70):  If he couldn’t get it done at Congaree, can’t see him getting it done here.

Braden Grace (72-70):  No stranger to contending in major championships.

There’s a lot of quality in the hunt heading for moving day.