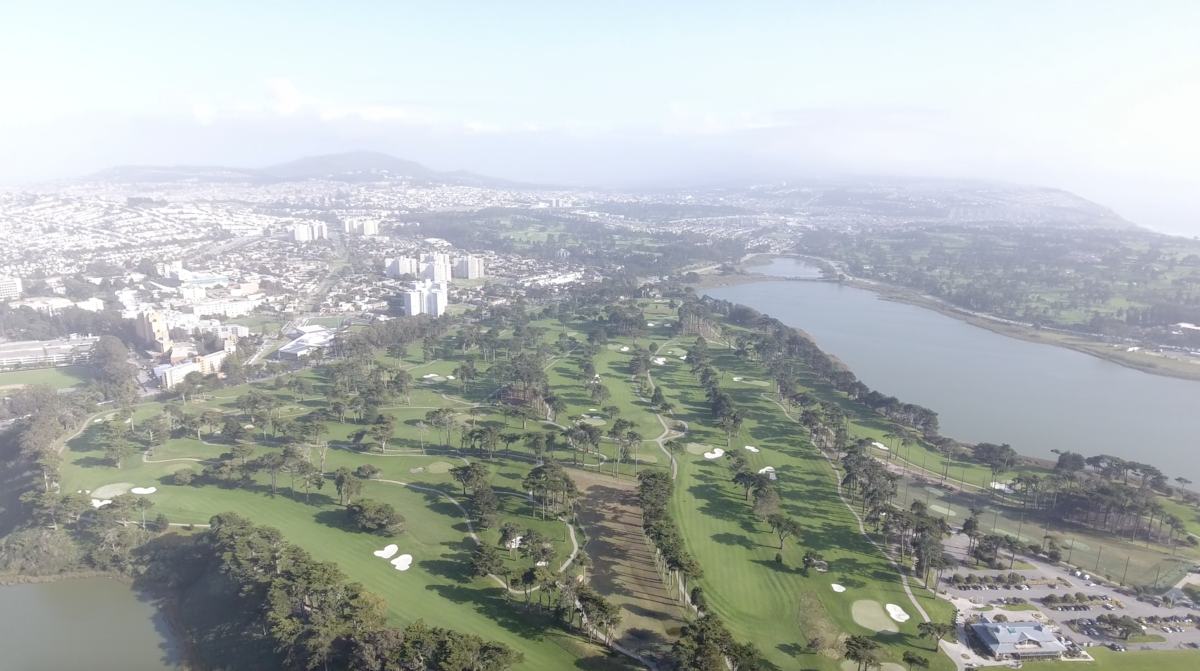 The "Marine Layer" is a common weather element at Harding Park.

It’s been more than a year since we’ve seen a major championship.

It was July, 2019, when Shane Lowry won the Open Championship at Royal Portrush.

There was no Masters in April, no PGA in May, no U.S. Open in June and no Open Championship at all.  The Masters will go in November, and the U.S. Open next month.

Which brings us to this week at Harding Park — it’s the 2020 PGA Championship, finally — a major championship.

This week marks the first-ever PGA at a municipal course in California.  But make no mistake, Harding Park is not your run-of-the-mill muni.  It’s spectacular.  It sits outside the city of San Francisco on the western fringe.  It’s closing holes — 14 through 18, are on the shore of Lake Merced.  Harding Park is a classic layout, framed by giant cypress and eucalyptus trees.  That five-hole finishing stretch is difficult and dramatic.

The course is ready to provide a tough test.  The fairways have been narrowed, the rough is ankle-deep and juicy.  There’s no rain in the picture this week, it can get very firm and fast — major championship fast.  Be careful of those angled doglegs.  There’s a thin line between a good shot and a bad lie.  It can stretch to 7,400-yards, par 70.  Bent grass greens will be slick.

We’ve seen what deep rough can do to the best players in the world.  It’s the great equalizer that nullifies the “smash-it-and-find-it” strategy.  Make no mistake, this week will be a complete examination of shot-making ability and short-game prowess.

With all of this in mind, it’s time for the inexact science of identifying the top contenders for this first major of the season.

Brooks Koepka:  He did enough good things last week at the WGC-St. Jude to give credence that he could peak at the right time.  If he can shore up his accuracy with the tee ball and get the putter going, there’s no reason he can’t three-peat.  He looks confident enough and you know that finish last Sunday on the 18th hole didn’t sit well with him.  Koepka has also made an equipment change this week.  He’s gone back to his old driver that won him some majors.  Good choice.

Justin Thomas:  J.T. is on everyone’s radar after last week’s big win.  The cool temperatures should invigorate him after the Memphis heat.  Has Bones on the bag again. They worked nicely last week and Bones, with his experience, is an asset.

Collin Morikawa:  Here’s our first-tier surprise.  Love how this kid can work his way around a course strategically.  West coast guy.  He’ll know what it takes to score on this track.  Superb iron player and has control off the tee.  Just a matter of how good he putts, but isn’t that the case with everyone?

Webb Simpson:  Another non-bomber.  Has what it takes to win a major now that he’s found a putting technique that works for him, there’s no reason he can’t be a top contender this week.

Rory McIlroy:  Time for Rory to get his act together.  Needs fairways and greens.  Crooked power won’t work this week.  If his putter isn’t working, that’s a deal-killer for Rory.

Jon Rahm:  Think he’s motivated by the embarrassment of holding the No. 1 ranking for all of two weeks?  Jon has the game to win this week but he’ll need more patience than ever if this is going to be his first major championship.

Xander Schauffele:  Has all the tools, has been up-and-down lately.  Hasn’t attracted much attention lately so he’s flying under the radar.

Dustin Johnson:  He’s quietly been getting back into form.  Tough to imagine D.J. under the radar, but yes, he is.

Tiger Woods:  It would be great if El Tigre can assemble anything close to his “A” game.  So many unknowns.  Cool morning temperatures, 55ish, makes it harder for him to get warmed up.  His putting was not good last time we saw him and good putting is what has won 15 majors.

Gary Woodland:  Hasn’t shown much lately.  Perhaps he wakes up this week.

Matt Fitzpatrick:  The young Brit has been impressive the past few weeks.  Keeps getting better.  We’re taking a flier on him.

Bryson DeChambeau:  He is doing his best to take over from Patrick Reed as the tour’s resident heel.  That fire-ant episode last week was borderline comical.  Screams of desperation.  Trying to bend rules to fit his personal narrative is unbecoming and his calling for rules officials is causing big-time delays.  If you could talk to guys off-the-record about it, they’d tell you they’re growing tired of this guy.  His kryptonite?  Deep, juicy rough.  Guess what’s on the menu this week?  On a side note, he’s never finished higher than 15th in a major.

Phil Mickelson:  If Lefty wants to win a major at age 50, then he better enter some senior majors.

Pat Cantlay:  His form has been off the past couple of weeks.

Rickie Fowler:  Everyone loves Rickie but his game isn’t showing him enough love.

Patrick Reed:  Has fallen in the villain rankings — he’s now No. 2 behind DeChambeau.

Tommy Fleetwood:  Not this week.

Jordan Spieth:  For every good shot these days, there’s a bad one.

There you have it.  There’s someone for everyone if you go over this list.  Who hoists the Wanamaker?  We’ll go for the “Sir Nick Faldo” answer on this one:  Whoever drives it best, hits their irons the best and putts the best.