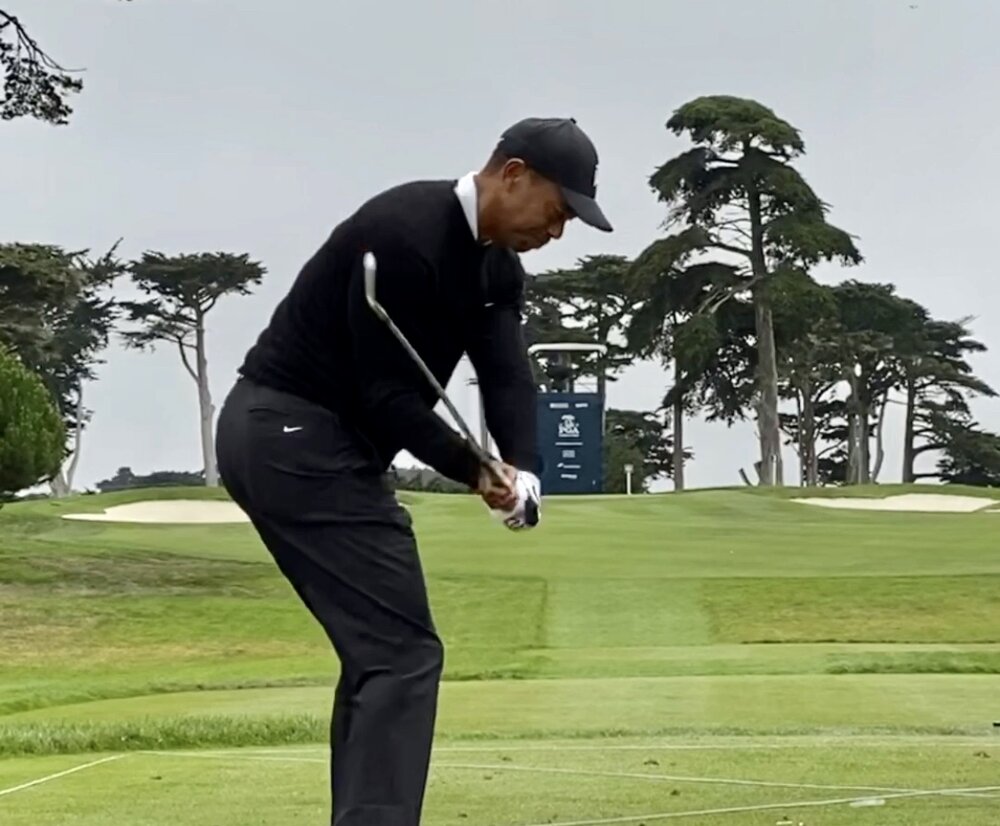 Tiger Woods has been practicing at Harding Park since Sunday.

“Of course,” he said, without hesitation on Tuesday, showing that trademark smile.

Confidence and belief are wonderful things but this is the 2020 version of Tiger Woods, and if major number 16 were to happen on Sunday, a lot of things will have to go right for Woods.

“I feel good,” he said after a quick nine at Harding Park in the morning.  “It’s going to be a fun-fest.  Rough is up, fairways narrow.”  Woods is hopeful he won’t repeat last year’s disaster at the PGA.  “My game is better than it was going into that PGA and hopefully I can put it together this week.”

Woods said he’s worked on some changes at home and he said he’s “very enthusiastic of the changes.”  What are they?  “I’m not gonna tell you that,” he said quickly.

Tiger got in 18 holes on Sunday, nine on Monday and another nine on Tuesday.  He has some interesting stuff going on during that practice.  Caddie Joe LaCava looked at each putt, gave Tiger his take on the read and Woods checked his greens book on each.  Tiger “short-game consultant” Matt Killen followed each day and was very involved.

On that same note, Woods has a new putter in the bag.  It’s not actually new, he refers to it as his “backup.”  It was made for him by Scotty Cameron, same specs as the Newport 2 he’s used.  It was made for him before last year’s Open Championship at Royal Portrush.  What this one has are adjustable weights in the sole so that Woods can add or take out weight from the putter.  He’s never used it in competition.

Woods was swinging freely, he looked flexible despite the cool weather.  He took a rip at a number of drives and managed to reach the 607-yard fourth hole in two.  He’ll need to hit a lot of drivers off the tees, four par fours are north of 450-yards and one of the par threes is 250.  “It’s not a big course numbers-wise but the ball doesn’t go very far here so it plays long.  Rough is thick, it’s lush and with the marine layer here, it’s only gonna get thicker,” Woods predicted.

Woods also issued a warning about potential ball-eating Cypress trees.  “Yeah, you can lose a ball in them,” he pointed out, and remembed losing some tee shots in the Cypress trees at nearby Lake Merced during his college days at Stanford.

Woods will begin his quest on Thursday at 8:33 a.m. (local time, 11:33 east coast) and he’ll go out with Justin Thomas and Rory McIlroy the first 36-holes.

Woods has looked comfortable and focused this week and he’s paid close attention to the greens and that’s understandable, given his struggles at Memorial.

The first round will be the toughest for Tiger with an 8:33 a.m. (west coast time) starting time and cool temperatures in the low 50s.  If he can get through with a round of par or better, he has a nice turn-around as he doesn’t tee off until 1:58 (west coast time) on Friday afternoon.

Ryan Moore, John Daly Not In The Field:

Most puzzling non-entrant in this week’s PGA Championship is Ryan Moore.

Moore is staying home to “rest up” for the playoffs.  Seriously?

John Daly withdrew as well and that’s more understandable.  Although he played last week at the Ally Championship at Warwick Hills in Michigan, he chose not to head to San Francisco.

Daly wrote on his Twitter page:  “People keep asking why I WD from PGA?  California now #1 in cases/deaths, I had knee surgery, I’m a diabetic & I don’t feel comfortable flying. Being too close proximity to even small crowds & risk exposure with my health not worth it! God Bess & y’all be safe!

Note, Daly would also have to walk the golf course.