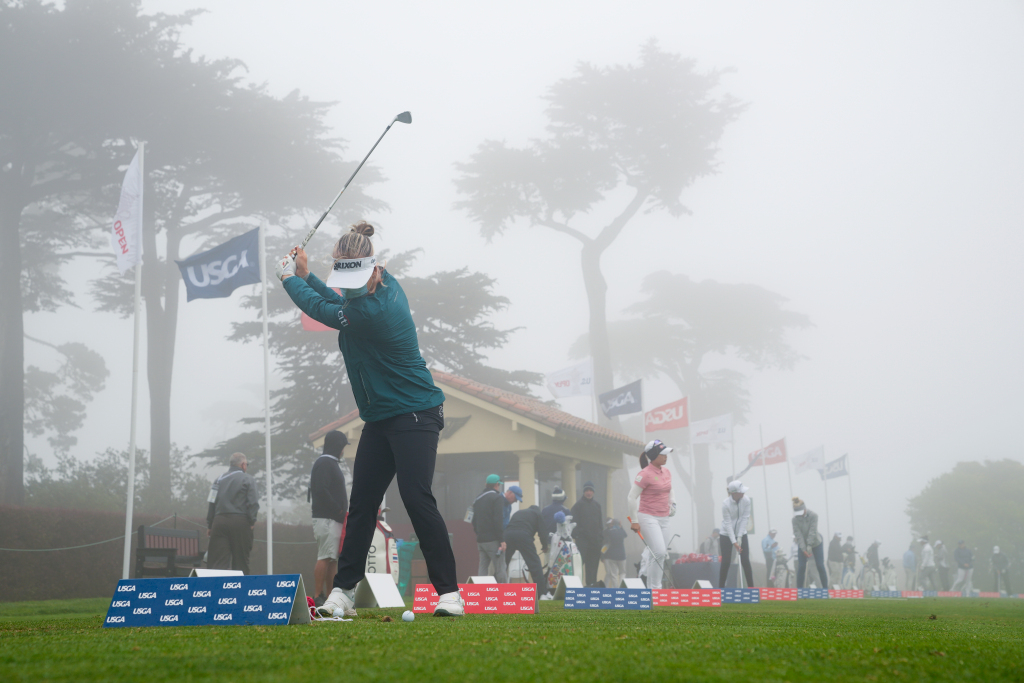 Hannah Green warmed up in the early morning fog at the Olympic Club.

Welcome to June in San Francisco and the 76th playing of the Women’s U.S. Open at the famous Olympic Club where the fog is fondly called “The Marine Layer” and the rough on this historic course beat up more than a few on opening day.

A chilly, damp first round greeted the field and it was evident from the start of the second major of the women’s season that you better keep your tee shots in the fairway.

The USGA and the Olympic Club were the real winners on Thursday although Great Britain’s Mel Reid got around nearly unscathed on her way to a four-under par 67 that set the early tone on a day when birdies weren’t easy to come by.

To say that Reid is a surprise co-leader is a massive understatement.  She’s played in five U.S. Opens and missed the cut in four of them.  When she made that one cut, she finished tied for 50th.  So perhaps it was a bit of a head-scratcher when she said after her round:  “It’s always nice to lead a U.S. Open,” as if she had any previous experience with a lead.  Reid added that she “had a game plan and stuck to it — conservative,” was how she described it.

There are always early surprises at U.S. Opens — both men’s and women’s — and this one was no exception.  If Reid wasn’t surprising enough early in the day, later it was a 17-year-old high school junior from New Jersey — amateur Megha Ganne — who joined Reid at the top of the leaderboard as an even bigger surprise.  Ganne’s no stranger to the U.S. Open — she played at the Country Club of Charleston in the 2019 U.S. Open.

With Olympic club member Michael Finn on her bag, Ganne had it to five-under on the short (325-yard) 18th but paid the price for hitting her tee shot in the rough.  She made bogey and lost her bid for the solo lead.  Ganne didn’t sound the least bit surprised to have a share of the first round lead.  “I just wanted to play my best and have fun,” she said with a big smile.  “Just having a great time.  You play in these more and more and you get better at it.”

Sixth-ranked Brooke Henderson had a chance to restore some order at the top of the scoreboard but Canada’s Golf Sweetheart three-putted the 18th from just 15-feet, finished with bogey and shot 68.  That left her tied at three-under par with Americans Megan Khang and Angel Yin, who finished eagle-birdie.Yuka Saso from the Philipines.

Ninth-ranked Lexi Thompson, who’s been playing in these since she was 14, bogeyed the 18th (playing with Henderson) and dropped back to two-under and her round of 69 tied her with Yuka Saso and Shanshan Feng, who recovered from her battle with the Las Vegas heat at last week’s match play and got in the day one mix.

In all, only eight players broke 70 on a course that plays even tougher than it looks.

World’s No. 1 Jin Young Ko put herself in perfect position with an opening 70 that tied her with six other players.  Second-ranked Inbee Park, twice an Open champion, shot 71 as did No. eight Lydia Ko.  Ko gave away four shots on holes 13 through 16 — playing them four-over par.

Biggest first round train wreck was Nelly Korda.  Korda was out early and left her game somewhere outside San Francisco as she finished with a seven-over par 78 and will have to rally on Friday to make the weekend.  Her sister Jessica was three-under at one point in her round and finished with a one-over par 72.

This one promises to be an intriguing championship and this is the type of course where anything can happen at anytime.