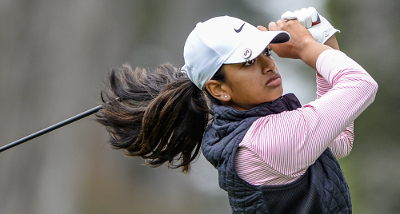 Seventeen-year-old Megha Ganne is two shots off the lead at the Olympic Club.

Teenagers Yuka Saso and Megha Ganne are the talk of the town and the tournament at the 76th Women’s U.S. Open with Saso holding the 36-hole lead.

Both are new faces on the major championship stage.  Saso, from the Philippines, is only 19-year-old and has two wins on the Japanese LPGA Tour, where she competes most of the time.  Saso has gotten the best of the difficult Lake Course at the Olympic Club after two rounds, shooting 69-67 and she’s alone at the top of the leaderboard at six-under par.

Jeongeun Lee6 is not stranger to the USGA.  She won the 2019 U.S. Open and still  spend the majority of her playing time on the South Korean LPGA Tour where she has six wins.  She’s just a shot behind Saso with rounds of 70-67 in the books.

Ganne is the true Cinderella of the championship.  She’s a rising high school senior from New Jersey who will head for Stanford after she graduates next year.  She opened with a 67 and followed that up with an even-par 71 and will start Saturday’s third round just two behind the leader along with American Megan Khang, who has been steady with rounds of 68-70.

Here’s how the contenders are lined up behind these front-runners:

Shanshan Feng (69-70):  Shanshan (call me Jenny), wilted last weekend in Las Vegas at the match play but the cool San Francisco temperatures have proven energizing for the Chinese star.

Lexi Thompson (68-71):  Bogeys at the fourth and fifth holes Friday dropped Lexi back to two-under.  She’s putting conventionally and rolling the ball perhaps the best in her career.  Lots of U.S. Open experience.

Mel Reid (67-73):  The first round co-leader backed up on Friday but is hitting the ball extremely well and getting advice from Brooks Koepka.

Ariya Jutanugarn (71-70):  Doesn’t carry a driver but is long enough with her irons to play the Lake Course quite well.

Maja Stark (71-70):  The amateur from Sweden is another surprise name among the 11 players who are under par.

Nasa Hataoka (72-69):  Solid Japanese star has the game to contend.

Danielle Kang, Hyojoo Kim, Marina Alex and Sarah Burnham:  Even par still puts you in good shape heading into the final 36.  Burnham put up the low round of the tournament on Friday with a dazzling 66.  Kang and Kim are in the world’s Top Ten, Kang ranked sixth, Kim seventh.