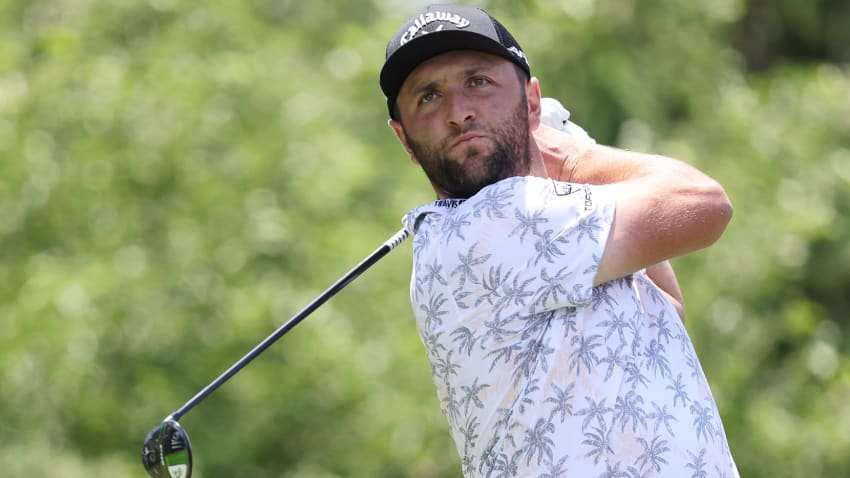 There was a stunning turn of events late Saturday at The Memorial tournament when Jon Rahm dominated the third round, built a six-shot lead then was told he has tested positive for COVID-19.

Rahm finished his second round, shooting 65 then put on an incredible afternoon performance, finishing with six back-nine birdies for a 64 that go him to 18-under par, six shots better than Patrick Cantlay and Collin Morikawa.

As Rahm walked off the 18th green, he was given the horrible news and he doubled over in disbelief.  He went to the scorer’s room and PGA Tour protocol forced Rahm to withdraw from the tournament.

Rahm was a shot off the 54-hole scoring record and looked well on his way to becoming only the second player to go back-to-back in Jack Nicklaus’ event.  Tiger Woods won in 1999 then again in 2000 and made it three straight in 2001.

Rahm’s misfortune meant Cantlay and Morikawa are tied for the 54-hole lead and will play in Sunday’s final pairing as the tournament got back on schedule.  Morikawa shot 66, Cantlay 68.

Scottie Scheffler (69) and Brandon Grace (67) will start the final round three shots off the lead at nine-under.

Rahm had tested negative every day, but his most recent test – which was performed after the conclusion of his second round (rain delayed) and before the start of his third round – returned positive at approximately 4:20 p.m. ET while Rahm was on the golf course. The PGA Tour’s medical advisor requested a confirmatory test on the original sample, which came back at 6:05 p.m. ET, and was also positive.

The medical advisor notified Rahm immediately upon completion of his round, and under PGA Tour protocols, he will be withdrawn from the competition. Rahm is now in isolation, and in accordance with CDC guidelines, he will need to remain in isolation through Tuesday, June 15.