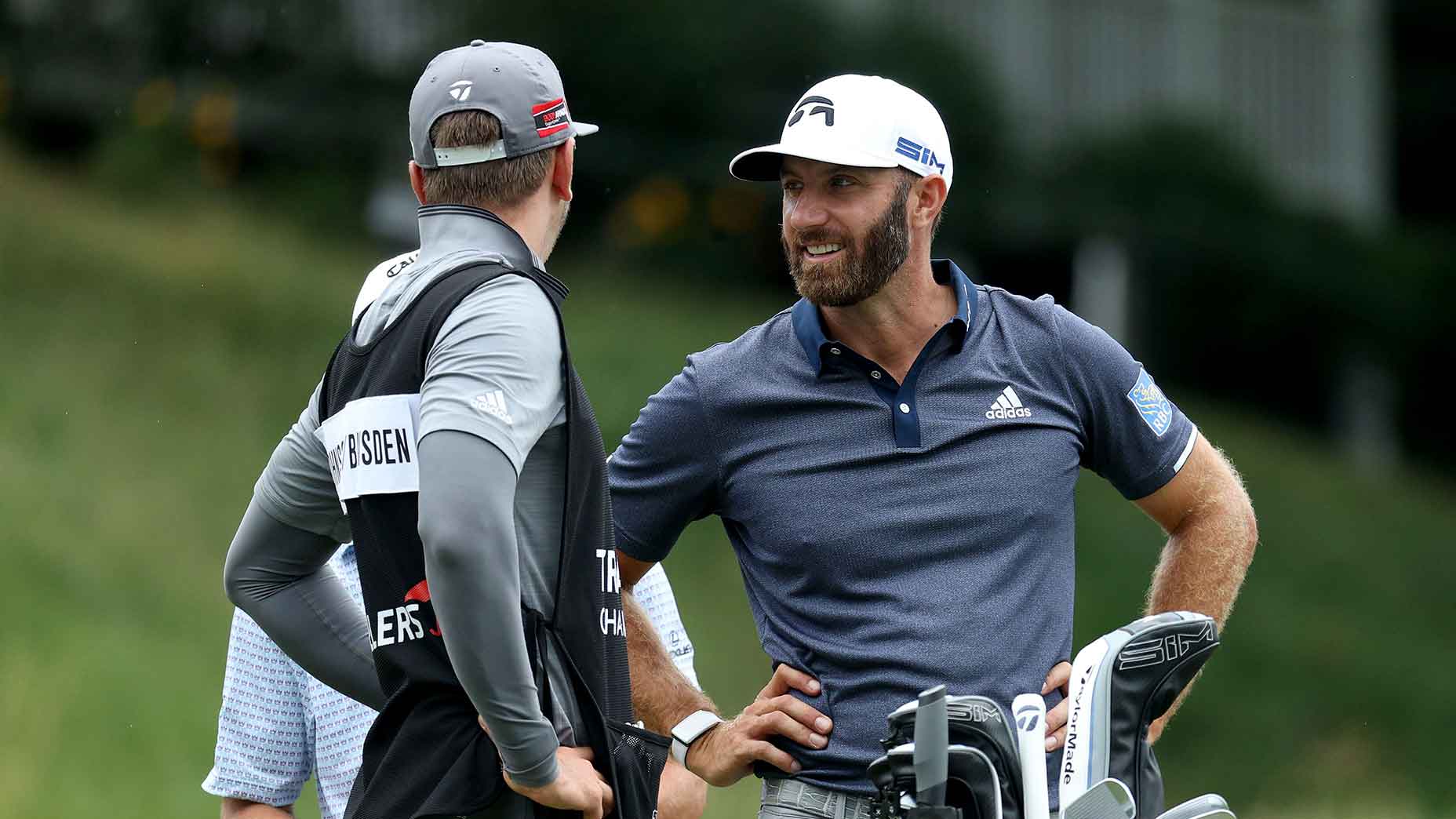 Dustin Johnson and brother Austin had a tense final nine on Sunday.

Early in the week, Dustin Johnson’s brother Austin, his caddie and confidant simply declared:  “My guy is finally healthy.”

D.J. looked quite healthy Sunday at The Travelers and so did his game.  It only took him nine holes at TPC River Highlands to overtake 54-hole leader Brandon Todd.  The final nine was a testament to Johnson’s ability to close the deal.

Win number 21 went into the record books Sunday afternoon after a near one-hour weather delay that made the wait a bit excruciating for the world’s No. 6.

“Feels good to get the win,” said Johnson, who overcame some bad swings coming home but found a way to shoot 67 and his 19-under total edged Kevin Streelman by a shot.

“I was due,” Johnson said matter-of-factly after a poor tee shot at the par three 16th erased a two-shot lead.  “The rain delay didn’t help me much, I hit an awful shot on 16.”  That tee shot sailed right into a greenside bunker as Johnson short-sided himself.  His shot came out a bit thin and left him outside 35 feet.  Two putts dropped him from 20-under to 19 and gave hope to Streelman, who a hole in front.

“I hit it good, just wasn’t in the fairway enough but I figured out a way to get it done,” Johnson said as he finished par-par to edge Streelman.  “I putted nicely this week,” he said after starting the week with a half-dozen putters in his possession.  He finally settled for a TaylorMade Truss model.

Johnson started the day two behind Todd but after a run of four birdies and a bogey on the front nine and nine straight pars from Todd, Johnson moved to 19-under and into the lead.

Todd took himself out of contention at the par four 12th when his second shot came up short and settled into the long grass on the face of a greenside bunker.  His third was a cold shank that sailed the green and settled into more deep grass.  His fourth didn’t go far enough and rolled back down, just a few yards in front of him.  By the time he holed out, he took a triple-bogey seven and the wind left his sails for the rest of the day.  He crashed and came home with a 40 for 75 and fell all the way back to 13-under — tied or 11th.

Johnson walked off 12 green, 20-under par with the easy par five 13th in front of him.  He pulled his tee shot left and it would end up out-of-bounds, leading to a bogey.  He bounced right back with birdie at the 14th then got the lucky break of the week at 15.  He chose a hybrid off the tee but again he pulled the shot and it look destined for the water left.  Instead, it hit on the bang and didn’t move, leaving Johnson with a shot.  He stood in the water, left his second short but got up-and-down for par.  He and Todd were standing on the 16th tee when the weather horn sounded.

After nearly an hour, they got back at it with D.J. hitting the sloppy tee shot on the par three.

Up ahead, Streelman failed in his bid to find a birdie on the two closing holes and Johnson’s two pars delivered the victory.

His 21st career win tied him with Davis Love III and Lanny Wadkins in the win department.  This was the 13th straight season for Johnson getting a tour win.  “Obviously it’s a great streak and I want to keep it going,” said Johnson, who now looks like he’s fully recovered from knee surgery last September.

Johnson started slow and missed the cut at the Schwab Challenge then tied for 17th at the Heritage.  But this week, things clicked, especially on Saturday when he delivered a career-low round of 61.

Yes, two very important words from his brother underscored this one: