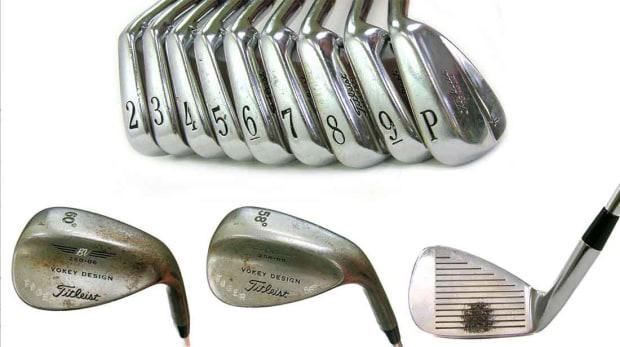 The seller of the Tiger Slam irons made north of $5 million.

The irons used by Tiger Woods during the iconic “Tiger Slam” were sold Saturday evening and the clubs fetched a staggering $5,150,000!

Yes, north of five million — a record for any sort of golf memorabilia.  But this wasn’t your average, run-of-the-mill memorabilia.  The authenticity of the irons was backed by solid provenance and pictures that showed them in Tiger’s hands during the time when he won four straight major, starting with the 2000 U.S. Open and ending with the 2001 Masters.

The irons were Titleist 681-T model and two Vokey wedges used by Woods during that time span.

Some Numbers From The 86th Masters:

Scottie Scheffler totaled 21 birdies for his four rounds on his way to the Green Jacket.  Cameron Smith had 22.

Scheffler was the only player in the field to break par all four rounds.

There were only two birdies on the 12th hole Sunday.  Scoring average on the iconic par three was 3.34.  Who says a par three has to be long?

Scottie Scheffler was the first winner to four-putt the 72nd hole.

How The World’s Top 10 Fared At The Masters:

Here’s how the best in the world performed at Augusta National:

No. 10 Xander Schauffele:  Missed the cut.