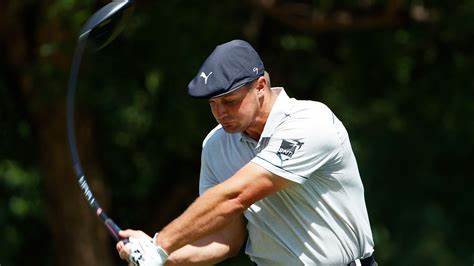 Bryson DeChambeau made it to the Friday championship after three grueling days.

Out in the Nevada desert about 80 miles northeast of Las Vegas the longest of the long hitters in the world of golf gathered this week — they started with 80 blasters on Tuesday and today, they are down to 16 and one will become the Master of Blasters late this afternoon/evening.

There is not a lot going on most of the time in sleepy Mesquite, Nevada.  The population is less than 20,000 and there were probably that many watching Bryson DeChambeau last week when he helped the U.S. Ryder Cup team wipe out the Europeans at Whistling Straits.

DeChambeau has been the disruptor on the PGA Tour.  Everything he does is different from what has been conventional in the world of professional golf and he’s the undisputed King Of Distance on the PGA Tour.

But this week, he stepped up into the land of giants, if you will.  He’s smack dab in the heat of battle at the Professional Long Drivers Association’s World Long Drive Championship.

Sadly, this event is not on The Golf Channel, as it has been in the past.  It’s a shame because there’s that huge name in the field and it’s Bryson.  He announced a few weeks ago that he’d enter and compete.  Maybe next time, if Bryson’s in again, this cool championship can actually make it to the air waves.  Anyway, back to Mesquite.  The crushing of golf balls began last Tuesday and the starting field in the Open Division had 80 men — many of them quite large in stature.

Kyle Berkshire is the defending champion and Bryson has worked out with him in the past, fascinated by Berkshire ability to launch drives past the 400 yard mark.  You may recall Bryson bombed one about 417 on Saturday at the Ryder Cup.

The field has been whittled down to 16 men.  Bryson is one of them and so is DogLegNews’ new instruction contributor — Josh Koch from the Reunion Resort outside Orlando.

Bryson and Josh were in two different groups of 16 hitters who battled on Thursday to reach the “Sweet Sixteen” of this championship.

Each group competed in five sets, hitting six balls in each set.  Points were earned based on how a player finished in each set, and each set matched up a player with three different competitors from the same group.  It was a round-robin style showdown.  Winners of each set earned 200 points, second received 100, 50 for third and 25 for fourth.  Group standings were determined by total points earned.

The top eight points winners from each group made it to today’s finals.  Championship Friday’s schedule looks like this:

The Open Division is where DeChambeau hopes to advance.  Same points system for the “Sweet Sixteen.”  The top eight move on and they’ll be divided into two groups of four.  The golf ball blasting will continue, with half eliminated until they’re down to two.  Then there will emerge a champion for  2021.

The wind came into play on Thursday — it became a 20-25 mile-per-hour headwind.  It made things tough.

From the looks of things so far, Bryson’s been having a blast — on and off the tee box.  He’s interacted with his fellow competitors and has emerged as a crowd favorite.

Truth be known — Bryson continues to wins friends and new fans these days.

He’s brought a lot of attention to the PLDA.

And they’re pretty happy about that.

How To Watch:  You can check out today’s action from Mesquite via the live stream on the PLDA site.  Click here for the link.