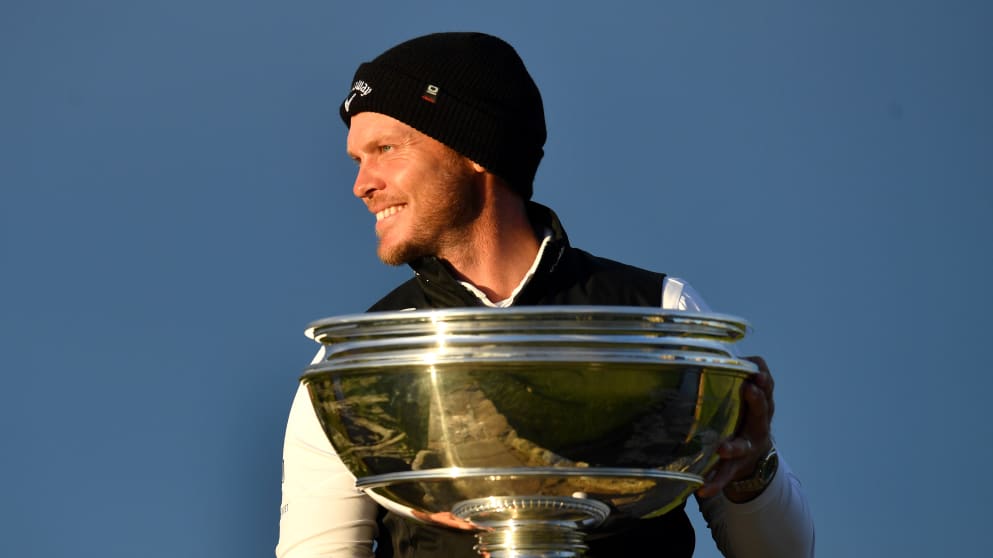 Danny Willett had a tough 2021 but he made up for it with a great week in Scotland — one that produced victory on Sunday at the Alfred Dunhill Links.

Willett closed out a great week on The Old Course at St. Andrews with a final round 68 and a winning 18-under par total to take this famous pro-am by two shots.

Willett went into the final 18 with a three-shot lead and proved he can still close despite going winless on the European Tour since the 2019 BMW PGA at Heathrow.  This was his second victory in the Dunhill Links, the first came in 2017.

It was a great bounce-back for the Englishman and a great way to celebrate his 34th birthday.  This win will get him back inside the top 100 in the world rankings and give him confidence as the Race To Dubai winds down.

Willett battled COVID, appendicitis, a hernia and painful wisdom teeth in 2021 — rough year.  But a week at St. Andrews, Carnoustie and Kingsbarns made it all go away.

“It’s magical,” said an emotional Willett. “On British soil with everyone here, it’s been a great week.  It’s been a couple of years of average stuff again. I seem to do this a lot actually, go up and down.  To win here, to be British and to be able to win on British soil, to win at the Home of Golf, this is a very special one.  Especially after how the last kind of year and a half has been for everyone involved.  Especially for us, we’ve struggled a little bit with things.

“This one, for everyone watching, this seems quite out of the blue,” Willett added.  “But the practice I’ve been doing at home and the inner belief we have every time we get in and out of position to do something was proven again.  Doesn’t matter where it is, who it’s against, it’s just a question of if the game is in shape. When it is, we’re all right.”

When Willett referred to Scotland as “British soil” he might get a bit of an argument from folks in Scotland but it’s still part of the U.K.

Terrell Hatton, fresh off his thrashing at the Ryder Cup, closed with 67 and tied for second at 16-under with Joakim Lagergren of Sweden.  Shane Lowry and Richard Bland tied for fourth at 15-under.

Celine Boutier had one heck of a Sunday at the Shop-Rite Classic.  She jumped up the scoreboard at Seaview Resort with a scorching, eight-under par 63 that put her in the clubhouse at 14-under.  She finished two hours ahead of some big names and by the time Jin Young Ko and Inbee Park arrived at the 18th green, Boutier was certain she’d be facing a playoff.

Park hit her third into the closing par five and it settled nine feet from the cup while Ko, the world’s second-ranked player, hit the green in two and was just 40-feet from the hole.  Ko’s approach putt came up eight feet short but Boutier was sure one, if not both of those world-class players, would make birdie.

“I was already in my mind going into the playoff and having to prepare for that,” Boutier said. “And then just the fact that neither Jin Young or Inbee birdied 18 really left me, I don’t know, kind of stunned. I’m still a little bit surprised about it.”

It was stunning as Park, a Hall Of Fame player, missed her putt then Ko followed, missing hers.  Just unreal,” Boutier said. “I still can’t believe that they both missed.”

It was Boutier’s second LPGA Tour win.  Her last came at the 2019 ISPS Handa Vic Open.

Ko and Park tied for second with Canada’s Brooke Henderson, who shot a closing 64.