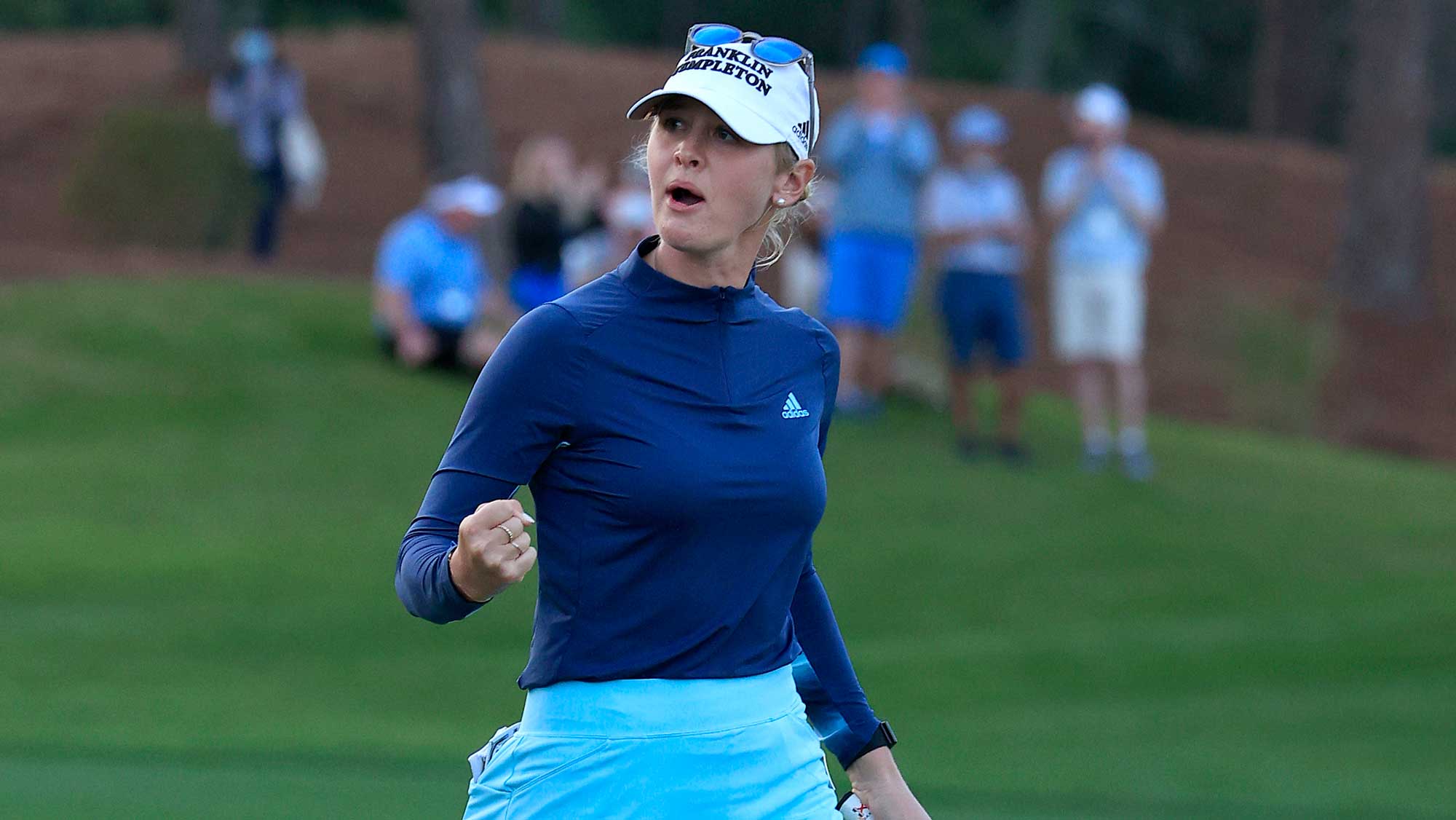 Jessica Korda's 30-footer for birdie got her back in the winner's circle.

Call it carry-over karma if you will but it was the other Korda sister, Jessica, who followed up her dazzling Saturday 60 with a gem of a 30-footer on the first playoff hole late Sunday afternoon to win the LPGA Tour’s Tournament of Champions.

Korda followed up that 60 with a closing 66 at Tranquilo Golf Club that caught and tied 54-hole leader Danielle Kang as both finished 72 holes at 24-under par.  Kang got four hours worth of Kordas as she played the final round with both Jessica and her younger, more accomplished sister Nelly.  Nelly did her best to get in the fray, she closed with a remarkable eight-under par 64 to finish two back and admitted afterward:  “I was just too far behind.”  Nelly finished solo third at 22-under, she’s the highest-ranked American at No. 4, a slot ahead of Kang.  Jessica will move up from 23rd with this win.

It was Jessica’s first win in nearly three years and her winning putt stunned Kang.  Kang lost the lead at the reachable par four 16th.  It played shorter than its 306 yards and after Jessica drove pin-high just right of the green, Kang lost her drive well right and after a drop, still found herself with a difficult third that had to carry trees and palmettos.  She got through but had to settle for par on a birdie hole.  Korda’s birdie tied her with Kang at 23-under then both traded birdies at the par five 17th, reaching the green in two and two-putting for their fours.  Pars by both at the 18th sent it to a playoff.

After finishing solo third at 22-under thanks to a closing 64, Nelly saw her sister hit her tee shot at the 18th to 30 feet but it was advantage Kang as she parked hers about 17 feet from the hole.  Korda then stunned Kang by hitting a perfect putt that found the bottom of the cup and she responded with an emphatic fist pump as her sister and parents celebrated.  Kang was unable to match it and Korda had her sixth LPGA Tour victory, her first since the Honda in Thailand back in February of 2018.

“I didn’t have great numbers all day. I was in between shots all day. It was just frustrating because I wanted to be aggressive, but then I wasn’t,” said Korda.  But that didn’t stop her from shooting 66 to make up the two shots on Kang, who closed with 68.  She made key putts, including the playoff winner.  “Having those putts roll in definitely helped,” Korda said, a true understatement.