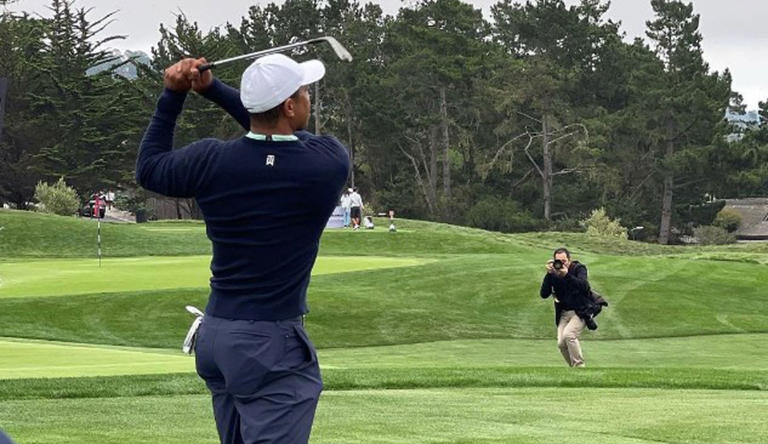 Tiger Woods was at Pebble Beach for his junior invitational tournament.

Tiger Woods emerged from his Fortress Of Solitude in Jupiter last week, cranked up Air Eldrick and ventured out to the Left Coast to host his TGR Junior Invitational.

Tiger’s tournament featured 60 juniors — 30 boys, 30 girls.  It was a two-day event with 27 holes of qualifying on Tiger’s short course design at Pebble Beach called “The Hay.”

After the qualifying, 12 players emerged to play matches at The Links at Spanish Bay.

In the process, Tiger treated everyone by playing the short course himself and word is that he was especially sharp with his wedges and putting.

Tiger’s buddy Notah Begay, even put this out for public consumption:  “We might see him (Tiger) one time this fall.  He might surprise everybody.”

In the meantime, everyone’s making a fuss that Tiger has tumbled all the way down to 1,206 in the Official World Golf Rankings, lowest ranking in his storied career.

For the record, here are the winners from El Tigre’s junior event:

Jack Nicklaus is the host of The Memorial tournament on the PGA Tour which is one of those “elevated” tournaments with a $20 million purse.

Nicklaus is concerned/curious as to how the new Tour schedule will work out.

The Memorial will fall on the new schedule between the PGA Championship and the U.S. Open.

Nicklaus believes that PGA Tour Commissioner Jay Monahan “has a little work to do to figure out how to make it work.

“I’m not sure what to make of it yet,” Nicklaus said last week.  “I think the Tour was going to get there, but the LIV thing pushed them. That’s pretty obvious. What it’s done is made the PGA Tour almost two tiers. All of a sudden the other tournaments become feeders.”

Seems Rickie Fowler along with Paula Creamer from the LPGA Tour have landed a paying gig with the Pop Stroke Tour Championship.

The event, as previously announced, will be held at the Sarasota (Florida) Pop Stroke facility with 500 players, pros and amateurs, showing up to take a shot at some big prize money.

There’s also a team event and when the three-day competition (October 26-28) has crowned winners, individual and two-person team, Fowler and Creamer will play the team winners in a separate $25,000 challenge.

The Pop-Stroke Entertainment Group is headed by none other than Tiger Woods his own-self.