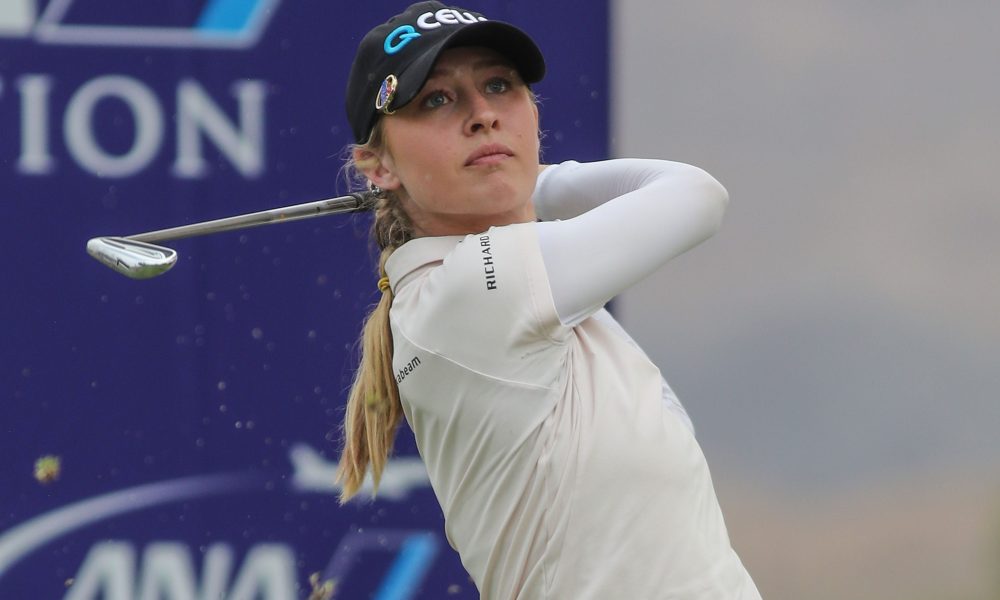 Nelly Korda's birdie on the final hole Thursday gave her the first round lead at the ANA.

ANA Perspiration: No Sweat At All For Korda And Kang

Here’s the weather forecast for the temperatures for the four days of the ANA Perspiration, er, Inspiration, at sweltering Mission Hills Country Club:

Ah, but it’s a dry heat!  You’ve heard that one, right?  Well, so is your kitchen oven but you wouldn’t put your head in it, would you?

The ladies got off to a sweltering start on Thursday at the season’s second major.  Wasn’t all that bad for the morning wave and America’s new star, Danielle Kang, went out and had herself a nice opening round.

What heat?  “I’m from Vegas,” she said matter-of-factly, “it’s 120 out there.”  Kang, the highest-ranking American player at the lofty No. 2 spot and the highest-ranked player in this major championship put seven birdies on her card but had a bit of an offset with three bogeys.  Still, with her mom watching her all the way, she shot 68 and held a share of the early clubhouse lead.

“It feels pretty good to post a lower score in the first round. I definitely made some mistakes out there but kept trusting my putting and trusting my speed, and then I made some good birdies coming down the line,” was how Danielle summed up her day.  With a win on Sunday, Kang would move to No. 1 in the world rankings.

As for that heat?

“It’s just been consistently hot every day, but it’s been pretty bearable so far.  But besides that, it’s a major championship. Every day there’s new difficulties. Even the simplest shot is not as simple as we think. So I’ve just got to stay focused, and I think that’s my main goal.”

Her shot of the day came at the par three fifth where her tee shot nearly went in and that excited Mrs. Kang.  “Yeah, this was the first time she got to come watch me play this entire year, so I’m really excited and happy about that, and she just shouted, “Get in the hole!” And I could kind of see it tracking, but I couldn’t tell — it was 191 yards out. I think the next thing I hoped for was to be as close as possible so I could just tap it in. Yeah, so it was fun.”

Kang wasn’t the only American player having fun.

Nelly Korda, who has risen to No. 3 in the world rankings, rolled in a four-foot birdie putt on the 18th hole for a six-under par 66 that gave her the solo lead for day one of this major championship.

Korda was subdued after her round, knowing there’s a long way to go.  “There’s still three more days to play. There’s so much golf out there,” Korda said. “You never know what’s going to happen. And if I just string together another couple good rounds, then we’ll see where it goes.”

Lexi Thompson was having a lot of fun early on.  She worked her way to three-under par through her first eight holes but then made the first of a series of mistakes that kept her from posting a low one.  At the par five 18th, her ninth hole of the day, she hit a wedge shot for her third, didn’t judge her carry distance well and saw the shot back up into the water fronting the green.

Thompson’s game looked solid for most of the round.  She spent some time with instructor Jimmy McLean at his facility in South Florida prior to this event.  Thompson’s putting stroke looked the most improved.  She’s gone to the Brooks Koepka right-index-finger-extended down the grip look and it worked well as she overcame some mistakes.

As for that heat, the field was prepared.  Caddies were allowed to drive carts and many players used sun umbrellas.  By day’s end, 18 broke 70 and a total of 48 players were under par.