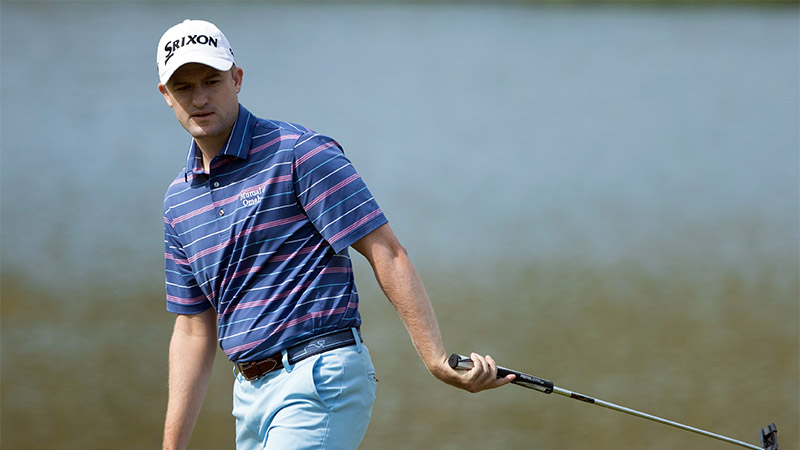 Russell Knox made only two cuts since the PGA Tour restart.

Russell Knox (63) A Most Unlikely Leader At Safeway

If you wanted to pick the last man you’d expect to be leading the starting event of the PGA Tour’s 2020-21 season it would be Russell Knox.

Knox hasn’t been on anyone’s radar for a long time.  When the PGA Tour restarted all Knox did was miss he cut in the first six events.  After that he managed a tie for 25th at the Barracuda then finished nearly last at the Wyndham, tying for 72nd.

So it was pretty much a total surprise Thursday at Silverado Resort when Knox came up with seven birdies and an eagle to shoot a nine-under par 63.

The air on Wednesday was filled with smoke from California wildfires then on Thursday, it was fog.  That fog caused a one-hour delay in play.  But that didn’t stop Russell from shooting light-out.

Knox was out in the morning wave and he finished two shots clear of one of the usual suspects at Silverado — Brendan Steele.  Steele, who collected two of his three PGA Tour victories at this event (2016, 2017), showed his comfort with the course and turned in a seven-under par 65.

In the afternoon wave, the trio of Sam Burns, Cameron Percy and Bo Hoag came within a shot of the leader and finished with eight-under par 64s.

Phil Mickelson found that life is a lot easier on the Champions Tour.  All he could manage was a one-under par 71 and left him tied for 81st and in need of a low round to make the cut on Friday.  Jordan Spieth’s woes continued.  Jordy’s one-over par effort of 73 left him tied for 116th and, like Mickelson, he needs a low one on day two.

John Daly is in the midst of a serious health crisis.

On an upcoming episode of the PGA Tour Champions Learning Center, a feature on The Golf Channel, Daly revealed he’s been diagnosed with bladder cancer.

Daly, 54, said he withdrew from last month’s Charles Schwab Series in Missouri after dealing with kidney stones and back pain. But a visit to the doctor showed it was more than kidney stones bothering him.

“The urologist said it doesn’t look like any stones are in there. But unfortunately, you have bladder cancer,” Daly said.  “After I did the CT I was fixing to sip on my Diet Coke and he said, ‘Don’t drink anything. We have to get you back in here and get this cancer out of you.'”

Daly underwent a procedure to remove the cancer, which was successful. However his battle is just starting.  The cancer has an 85 percent chance of recurrence. “So I’ve got to go back and see him in three months. They will probably have to cut it out again,” Daly said. “It’s probably going to come back, and then another three months that you don’t know. You just don’t know. Luckily for me they caught it early, but bladder cancer is something that I don’t know all the details. But it doesn’t look like it may go away. We will just see what happens. Maybe there’s a miracle.”

Daly said he’s trying to make some lifestyle changes.  “I’m cutting way, way back on the Diet Coke and counting minutes before I can have a cigarette. I’m trying to quit smoking,” Daly said. “The doctors aren’t saying it’s too late. Unfortunately, it’s a cancer that keeps coming back. But I’m going to listen to them, and I’m going to try and quit smoking. If it comes back, it comes back. Six months to a year, if it doesn’t go away, I’m going to live my life. I’m gonna have some fun.”

Daly’s interview will be aired on The Golf Channel on Monday night.