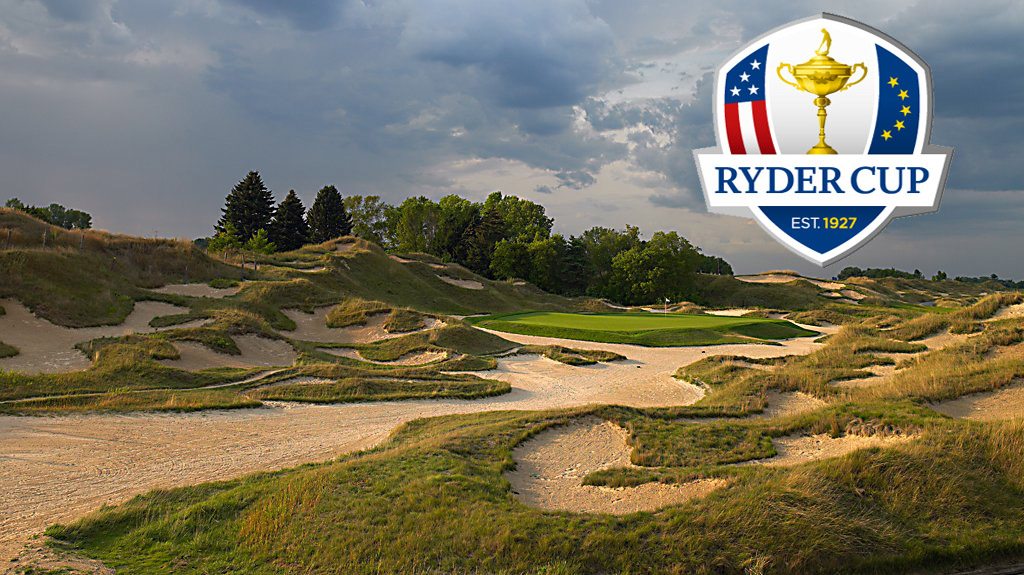 Whistling Straits and the more than 1,000 bunkers should provide a lot of drama.

Early Friday morning, this 43rd edition of the iconic Ryder Cup matches begins at Whistling Straits and if the United States team is to prevail come late Sunday afternoon, this talent-laden team will have to overcome the ghosts of recent Ryder Cup fiascos.

“We’re coming in here as underdogs with a lot stacked against us,” was how Team Europe’s Rory McIlroy put it, hitting the proverbial nail square on its head.

“Course set-up is heavily weighted for the U.S.  It’s difficult from start to finish — we have to play special to get the job done.”

First up on Friday morning is the session that the United States teams have traditionally struggled with — Foursomes — aka Alternate-Shot.  U.S. captain Steve Stricker is sending Justin Thomas and Jordan Spieth out first to tackle the talented Spanish duo of world No. 1 Jon Rahm and Sergio Garcia.

The rest of the Foursomes matchups:

“Xander and I are really good friends,” Cantlay pointed out on Thursday.  “I know he’s trying as hard as he can.”  Cantlay also gave his thoughts on the alternate-shot competition:  “Weird thing about foursomes (alternate shot) is you only hit half the shots — so each shot is doubly important.”

With that in mind, we now take on what the United States team needs to do to wrestle the Ryder Cup from European hands.

They’ll play this format on Friday and Saturday morning, right out of the box.  It’s important for the U.S. to try and keep its proverbial head above water.  The Americans cannot go out and lose these sessions heavily — like 3-1 or 4-0.  A 2-2 tie in Foursomes session is the path to victory for the Americans.  Even keeping it close, say 2 1/2 to 1 1/2 would be encouraging.  If by some wonderful ray of great play, should the United States manage to win one of these sessions and keep the other close, it would be a great thing for Steve Stricker and his team.  In recent Ryder Cups, this has been the most uncomfortable format for the U.S.  Match to watch in the morning session:  Cantlay/Schauffele vs. McIlroy/Poulter.

Fourball (best ball) is where the U.S. team needs to thrive, it needs to win both of these Friday and Saturday afternoon sessions.  This format plays to the U.S. strength and it’s important for Stricker to put together some birdie machines.  Don’t look for Bryson DeChambeau in the alternate-shot sessions but he should be a good partner in best ball.  He makes a lot of birdies and pairing him with someone who can cover his behind when he hits one of the wide-left or wide-right tee balls is a key.  The U.S. needs to win both Fourball sessions.  If Europe can split and do its thing in the Foursomes, the U.S. might find itself in trouble.

Stricker has all the say in setup and it’s an American setup — wide fairways, very light rough.  That being said, there are more than 1,000 varieties of sand bunkers at Whistling Straits and drives well off line can end up in serious trouble (yeah, you Bryson).  They’ll probably make sure the greens stay soft and receptive and that favors the American sharp-shooters.  No excuses with the setup for Team America.  Stricker, if anything, has over-prepared the team.

With Europeans unable to travel into the U.S., this will be the most heavily partisan U.S. crowd, perhaps ever.  No chants of “Olay-Olay-Olay” coming out of the stands.  The Europeans have been subtle in efforts to win over the fans — including wearing Green Bay Packers colors on Wednesday and showing up on the first tee wearing those Packer “Cheese-Head” hats, then removing them and tossing them into the crowd.  European teams have been very skilled at winning some American hearts.

It’s going to be cool and windy.  With eight holes overlooking scenic Lake Michigan, it has a feel of Ireland to it.  Same for the weather.  “In the wind, you have to be used to hitting a six-iron 150 yards where most of these players hit it 200 yards,” said 2018 Open champion Shane Lowry.  Indeed, most American players end their season after the Tour Championship and don’t show up again until late January, early February.  They don’t spend much time in cool, windy conditions.  The conditions should prove a huge challenge to Bryson DeChambeau and his lengthy list of “calculations” for each shot.  Winds can gust up to 20-25 miles per hour.  Winds and cool temperatures work in favor of the Europeans.

Remember, it’s match play and anything can happen.  Most of the U.S. team hasn’t been in competition since the Tour Championship, where Jon Rahm shot the low score for 72 holes along with Kevin Na.  Team Europe is so very comfortable with match play in general.  Captain Paddy Harrington’s team looked very loose and relaxed all week.

With so many things stacked in its favor, the American team has the most pressure to perform.  The old adage holds true here:  Beware of a fight with someone who has nothing to lose.

The U.S. team needs to be within striking distance heading into the Sunday singles matches, where the U.S. should win no less than seven of the 12 matches.

The U.S. team should win.

Will the Americans hoist the cup on Sunday afternoon?