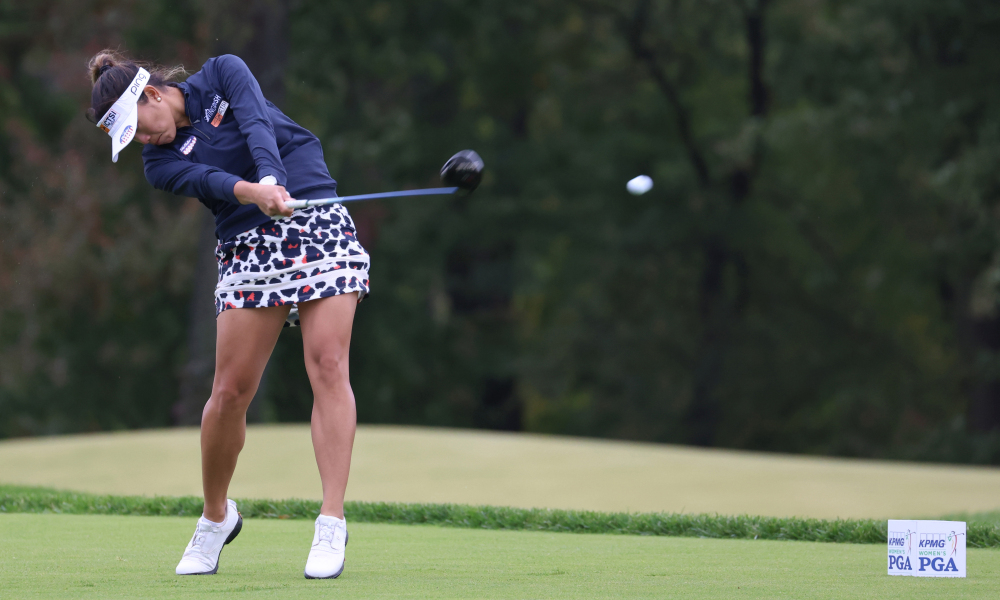 Say hello to Bianca Pagdanganan — she will soon be known to many as the longest driver on the LPGA Tour.

She was in the final pairing last Sunday at the Drive-On Championship, in there with eventual winner Ally McDonald and now fourth-ranked Danielle Kang.

Pagdanganan nearly made LPGA Tour history last week.  No player in the tour’s history has ever averaged 300-yards during a tournament.  Like the PGA Tour, they have two measuring holes on the course per day. Pagdanganan’s first-round driving average was 300 yards.  She followed that with a 295-yard average in the second round, 310 yards during the third round and 293 yards in the final round. That brought her four-round average to 299.5 yards, incredibly close to the 300-yard mark.

There’s little doubt at some point she will hit that magic number.

A 300-yarder is a ho-hum experience on the PGA Tour but this rookie from the Philippines is crushing it on the ladies circuit.

She finished solo third at the Drive-On with rounds of 68-67-69-70 for a 14-under par total, two behind eventual winner McDonald and one back of runner-up Kang.

People started to notice the former University of Arizona golfer at the Women’s PGA Championship.  She finished three-over for the tournament and tied for ninth.

“That was my first major and my best finish in any event,” Bianca said. “It was an eye-opener and made me realize that I can play at this level. I can compete. If I just remain positive, keep that mindset and keep improving, not just this week or this year, but for however long that I play, that’s all I can do.”

Last week she showed a nice overall game with that solo third, showing she’s more than a drive-for-show player.  That finish moved her from 234th to 151st in the Rolex World Rankings.

“She says she wants to be the first woman to average 300 yards,” Pagdanganan’s father, Sam, said during last Saturday’s round at the Great Waters course, part of the Lake Oconee course portfolio. “She also wants to win,” he was quick to add.

With her performance in her past two events, a victory may soon be on her horizon.

In the meantime, time is on her side.

How about a $2 billion mega-deal between Callaway and Topgolf?

On Tuesday Callaway Golf (NYSE: ELY) struck a deal to merge with Topgolf Entertainment Group in an all-stock deal. The number of shares to be issued is based upon an implied equity value of Topgolf of approximately $2B, including the 14% already owned by Callaway.

Callaway shareholders will own 51.5% of the combined company and Topgolf holders will own 48.5%.  The Topgolf centers generated approximately $1.1B in revenue in 2019 and have grown at a 30% compound annual rate since 2017.

The deal is expected to close in the early part of 2021.