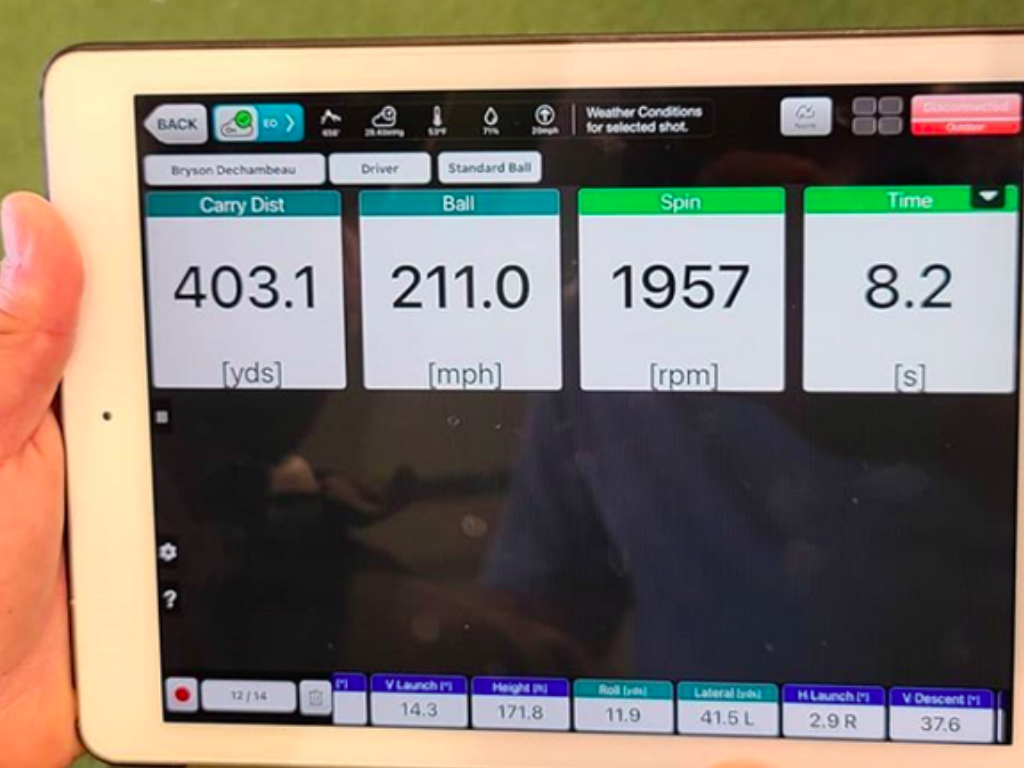 Meanwhile, back in the distance lab, Bryson DeChambeau is carrying on his prep work for The Masters, which is now just 16 days away.

Last week Bryson flashed a shot of his Trackman readings:

Those numbers are absolutely mind-numbing.  And Bryson felt compelled to add this tidbit:  “Not even the 48-inch driver.”

Bryson talked previously about busting the 400-yard barrier and a lot of responses were something like:  “Yeah, sure Bryson….”

Now we have evidence.  but we may want to put an side note in there like they do in track and field springs — DeChambeau’s monster numbers were aided by a 20 mph helping wind. Of course, it appears that the weather conditions also included 56-degree temps – hardly ideal for the long ball but maybe the same temperatures we’ll see at Augusta in two weeks.

Not sure what DeChambeau’s total preparation looks like but we’re pretty sure he’s falling short of what the late Bert Yancey once did.  Yancey, obsessed with winning The Masters, built a scale model of Augusta National Golf Club in his basement to help him plan his strategy.

Yancey never did win The Masters though he did finish third in 1967 and 1968.

Woods has kept his pre-major protocol and WILL NOT be playing in the Houston Open.

That news came from Woods agent — The Great Stiney (aka Marc Steinberg).

Thus, Woods, after a so-so at the Zozo sort of showing, will prepare at home on Jupiter Island, perhaps sneaking a peek at Augusta next week if they let him.

Rory McIlroy:  29 Birdies At The Zozo:

Most birdies at last week’s Zozo Championship?  Easy — Rory McIlroy made 29 and didn’t even finish in the top 10.

That’s good and bad news with The Masters coming up as Rory tries to complete the career Grand Slam.

Rory was pretty aware that he made a lot of mistakes.

“After two days I had made seven the first day, eight the second day, so I made 15 birdies after two days and was not in the top 40, so I was pretty proud of that,” he said with a laugh. “I kept saying to Harry (caddie Harry Diamond) every time I made a birdie, ‘23, 24, 25.’ He said, ‘That’s not a good thing. You’re 20th in the tournament and you made so many birdies.’”

Rory finished with seven birdies for his final round.  He closed with a 66 that moved him into the top 15 at 15 under par.

Rory knows he can’t afford that many mistakes and have a chance at Augusta National.

“I’m trying to be really almost just too perfect and I’m maybe just being a touch aggressive when I get myself out of position,” he said. “So just taking my medicine a little bit more when I do. That was sort of the story of the week.”

Rory plans to get in a trip to Augusta before the tournament to check on the fall conditions.  It will be his last appearance for 2020 and his next start on the PGA Tour will be at The Farmers Insurance in late January of 2021.

Tiger Woods says the traditional Champions Dinner at The Masters, typically held on Tuesday night before the tournament starts, is still on.

It will be moved from the smaller dining room upstairs to the main level.

“I think we’re not going to get a lot of the past champions coming because obviously they’re at the at-risk age,” Woods said. “It’s going to be a shame, but this is unlike any times we’ve ever had in the past, so we’ve got to do what we can do to obviously have the traditions that we’d like to have but also maintain safety guidelines.”

The popular Wednesday Par Three contest at The Masters will not be held this year.  Augusta National Golf Club made that decision due to the no patrons on site this year.

In another variation from protocol, officials said that they will use a two-tee start with threesomes in Rounds one and two. With the return of Eastern Standard Time, sunrise will be around 7 a.m. and sunset near 5:30 p.m. Even with a limited field – 96 players set for this year – there likely would not be enough time to finish rounds with all players going off the first tee in threesomes, as the Masters usually does.

A cut will be made to the top 50 players and ties and a standard one-tee, twosome start is anticipated for Saturday. Sunday will have an early finish, which will again call for a two-tee start.

Another announcement from Chairman Fred Ridley on Tuesday was that ESPN’s College Gameday Show will originate from Augusta National with the set overlooking Ike’s Pond.

“Given the circumstances brought about by the pandemic, the delivery of quality content is as important as ever to the storytelling of the Masters Tournament,” said Ridley. “While we will dearly miss our patrons at Augusta National this fall, we are excited to showcase what promises to be a truly memorable Masters in a variety of ways for viewers around the world.”

With the season’s final major taking place during college football season, Augusta National decided to integrate the two sports. “College GameDay” will air from 9 a.m. to noon ET on Saturday, ahead of CBS Sports’ coverage of the Masters’ third round.

It was the Bermuda Championship that brought Brendon Todd back to life on the PGA Tour and he’ll defend his title at Port Royal Golf Club in Southampton this week.

Todd is listed as a pre-tournament co-favorite along with Will Zalatoris, who is trying to earn enough FedEx Cup points to get PGA Tour playing privileges.

Most of the big name players are skipping the event and some may opt to play next week at the Houston Open as a preparation for The Masters, which starts November 12.