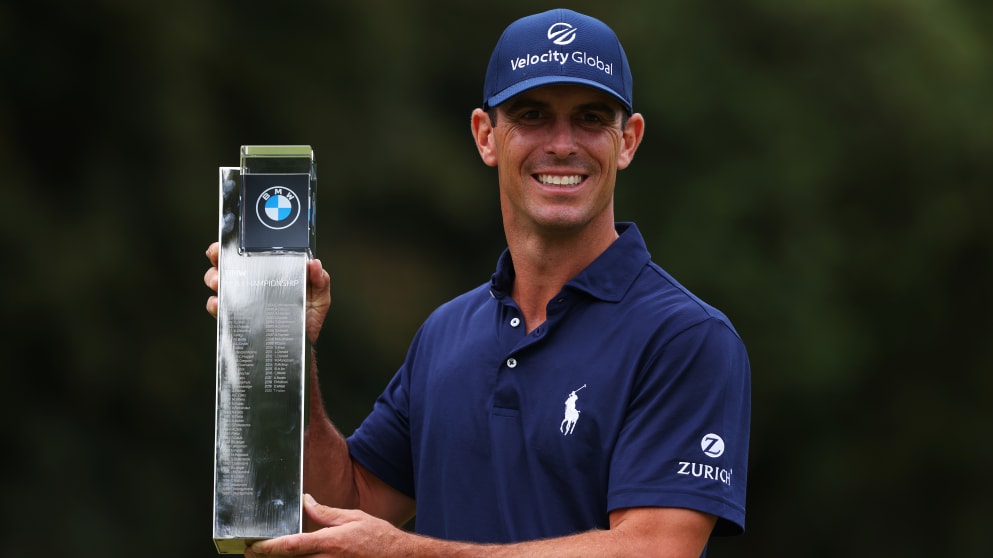 Billy Horschel was irked that Steve Stricker didn’t bother to call him to tell him he was NOT going to be on the U.S. Ryder Cup team.

With a huge chip on his shoulder, Horschel came up big on the 72nd hole Sunday at Wentworth and bagged the European Tour’s Flagship event — the BMW PGA.

Horschel won with an incredible lob wedge shot from 91 yards for his third into the par five 18th.  He was deadlocked at 18-under par with Jamie Donaldson, Laurie Cantor and Kiradech Aphibarnrat.  Horschel shot landed 20 feet past the cup and spun back to a foot, leaving the former FedEx Cup champion with a tap-in for the huge win.  He closed with a bogey-free, seven-under par 65 that got him to 19-under par.

“I’m speechless, which is very rare,” Horschel said as he became the first American to win a Rolex Series event on the European Tour.  “I played really well.  To me, this is the (European) equivalent of winning the Players Championship.  I played really great all week.  The birdie at the 15th (to go 18-under) was huge — I had three birdies holes to go.  After missing out at the 16th then the par five 17th, Horschel drove into an awkward lie on the final hole then hit a perfect layup.

It was a heated finish with at least five players with solid chances to win.  Aphibarnrat was 18-under with the two par fives to play — but a horrible second shot into a hedge resulted in a bogey at the 17th but he got back to 18-under with a closing birdie and a round of 64, low score among the contenders.  Cantor, looking for his first European Tour win, birdied 17 to go 18-under but his a bad drive at the 18th that found a bunker left of the fairway.  He hit a nice layup but his wedge approach sailed right and left him with 17 feet to tie Horschel.  He missed.

Donaldson, who hasn’t won in seven years, had the birdie-birdie finish the rest were hoping for but he came up one shot.

Justin Rose closed with a 65, finished 16-under, tied for sixth but it wasn’t enough for Padraig Harrington to make him a captain’s pick for the European team.