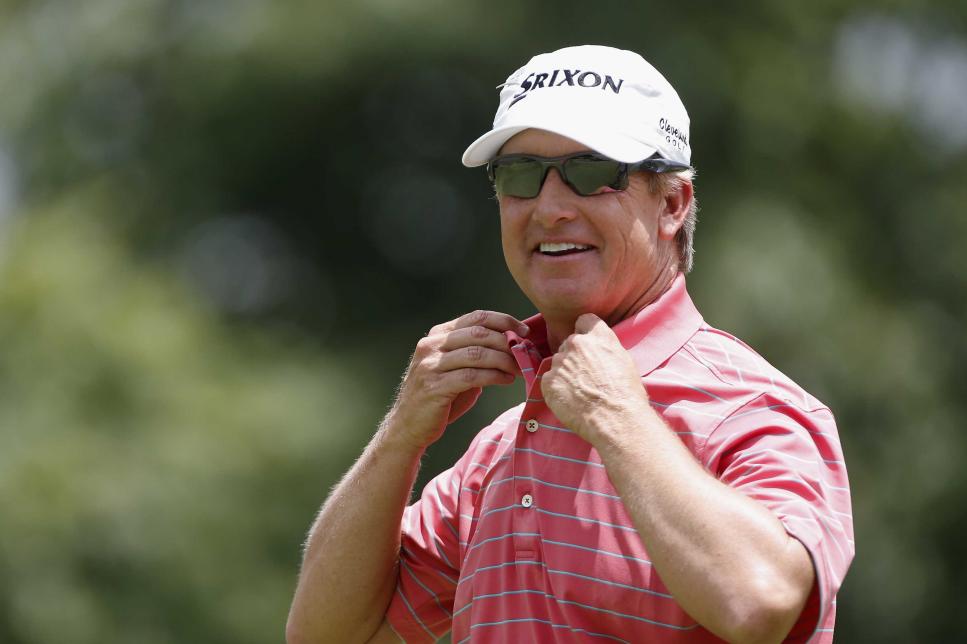 David Toms beat Dicky Pride with a par on the first playoff hole.

Posted By: Tom Edringtonon: September 13, 2021In: In Other News...No Comments

Considering he won 13 times on the PGA Tour, including the 2991 PGA Championship and captured the 2018 U.S. Senior Open not long after his arrival on the “old guy” circuit, David Toms has been a bit of an underachiever on the over-50 set.

It took him more than three years but he finally picked up his second win on Sunday at the Ascension Charity Classic in St. Louis.

Toms fired a final round 66 and posted 10-under par then waited to see what might transpire at Norwood Hills’ West course outside St. Louis.  Jay Haas shot his age, 67, but fell a shot short at nine-under.  Same for Woody Austin.  Dicky Pride got it to nine-under with a hole to play.  Pride’s approach to the 18th didn’t appear that threatening, pulling up 20 feet from the cup.  While Toms hit wedges on the nearby practice range, Pride lined up his birdie putt and sent it on a perfect line — into the hole for 67 to join Toms in double-digits under par.

In the playoff, both found the 18th fairway, Pride let his approach sail right and into a greenside bunker, short-siding himself.  All Toms had to do was find the green.  He did and put himself in easy two-putt range.  Pride’s bunker shot left him another 20-footer — this time to save par and he’d already used up his lucky token.  The putt missed and Toms had his second win.

“I still work hard. It’s tough,” said Toms, who was a bit emotional given the years between senior wins.  “Guys prepare every week.  They play great. It means a lot, obviously.  It means a lot. I felt good all week here.  It felt like a PGA Tour event with the crowds and everything, the buildout.

“I was worried early in the week.  The golf course was really soft and with the Zoysia fairways it was playing crazy long.  It just got faster and faster, and I started driving the ball really well. My speed was better today with the putter, too. I didn’t make everything, but I felt good over it, which is key for me.”