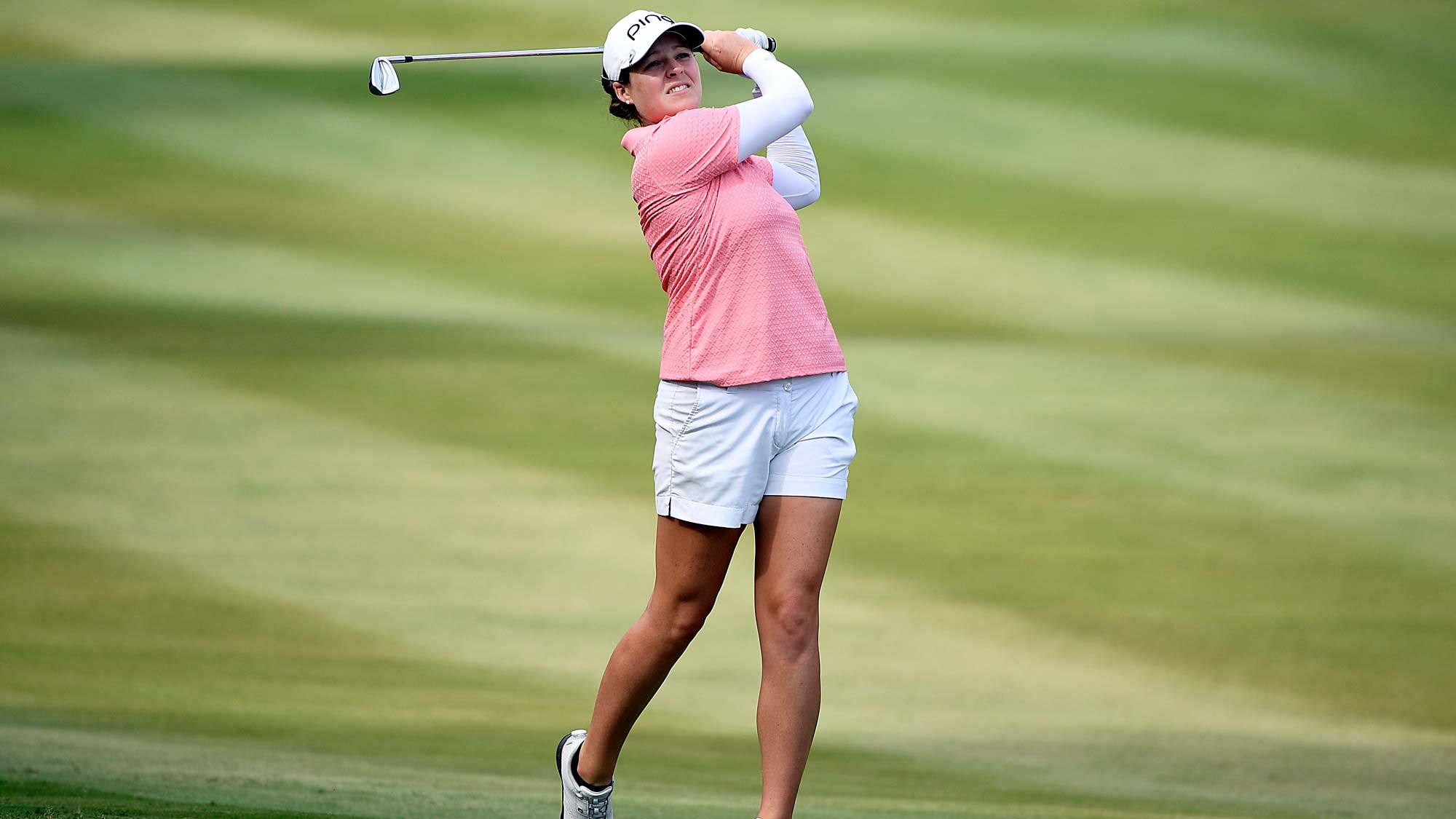 Ally McDonald was making it look easy at the Great Waters course on a fall Sunday afternoon in Georgia.  She was after her first-ever LPGA Tour win and she looked focused and in control as she birdied the 10th, 11th and 12th holes to build a four-shot lead with six holes to play at the Drive-On Championship.

But things are rarely that easy in the world of golf and that’s exactly what McDonald found out over the nervous closing stretch.

It was her 28th birthday and she was fashioning the proper gift for herself and her parents, who were on hand, watching her victory march.

But playing partner Danielle Kang, who at No. 5, was the highest-ranked player in the field, had her say quickly.  At the par four 13th, there was a two-shot swing as Kang made birdie and a drive in the rough produced bogey for McDonald.  The four-shot lead was now two with five holes left.  The heat was turned up even more by Kang when she birdied the 14th and cut McDonald’s lead to just one with four to play.  McDonald was 16-under for the tournament, Kang 15-under.

McDonald admitted afterward that Kang got her attention, big-time:  “I’m not going to lie, it shook me up pretty bad,” McDonald said. “I had to gather myself and get my heart rate under control after I made bogey on 13 and Danielle went back to back on birdies on 13 and 14. I just told myself to calm down and do what I’ve been doing every single round, and that is just trying to execute my game plan, control what I can.

“I knew from the start that Danielle was going to hang in there,” McDonald said. “You kind of go to match play mode and you think absolutely she’s going to put the pedal down. So I was just happy to hang in there and pull it out.”

Kang helped McDonald when she missed a five-footer for par at the 15th, giving McDonald more breathing room — two shots with two to play.  Both parred 17 then at the closing hole, McDonald chose the conservative route and hit a layup, as did Kang.  It was then that Kang nearly holed her third for what could have been eagle three.  As it turned out, McDonald made easy par, Kang closed with birdie for 68 and a final 15-under par total, a shot shy of McDonald, whose 69 got her to the winning 16-under number.

“It means the world to me, obviously, that they’re here” McDonald said, all smiles after the win.  “This is the closest golf tournament that we have, and commish (Mike Whan) just added it to our schedule with COVID happening and canceling some events. Having them here was just amazing. To be able to share with them and them being such huge supporters of me since I was young, taking me to golf tournaments, reminding me to do my drills, telling me that I need to act better on the golf course, all those things just all just coming around in my mind. Them being here to savor this moment just means so much.”

“I’ve never doubted my ability, but I’ve definitely questioned whether I would be able to win out here,” McDonald said. “It’s really hard to win out here. So, I’ve just really hung in there and tried to stick to my process since day one. That was able to get me in the winner’s circle today. I’m really thankful.”

It’s been 11 years since Ross McGowan last won on the European Tour but his drought ended on the 72nd hole at the Italian Open on Sunday afternoon at the Chervo Golf Club.

Locked in a duel with Laurie Canter, the two Englishmen shared the overnight lead, both were 19-under through 54 holes.  Birdies were hard to come by and McGowan made a spectacular two at the par three 16th when he holed his second from a greenside bunker to take the lead after Canter took back-to-back bogeys at the 14th and 15th.  Canter bounced back with a birdie at the par three 17th and both players stood on the 18th tee, even par for the day at 19-under.

Nicolas Colsaerts was an interested onlooker at 18.  He birdied the 18th for a 68 and posted 19-under.

McGowan didn’t have the length to reach in two at the par five closing hole.  He hit a layup to 118 yards while Canter’s second left him with an awkward pitch.  McGowan’s wedge shot wasn’t hit best — it left him with a 20-footer for birdie while Canter got his to 14 feet.

The 38-year-old McGowan had not finished in the top 150 on the Race to Dubai since 2010, graduating from the Qualifying School in 2015 and 2017 but, after claiming a third European Challenge Tour win last season.  His win gave him full playing status on the European Tour.

“I can’t believe it,” he said. “I hit the ball terrible today but luckily the putter kept me in it again.  The tee shot on 16 was a shocker, the second shot wasn’t much better and then I holed the bunker shot so I think that was the one that gave me a bit of belief. Then to roll that putt in there (on the 18th) was magical.”

Canter finished with an even par 72 and it was his short game that proved costly down the stretch.  He tied for second with Colsaerts with Germany’s Sebastian Heisele (69) finishing solo third at 18-under.

Martin Kaymer (68) was one of five players who tied for fifth at 17-under par.