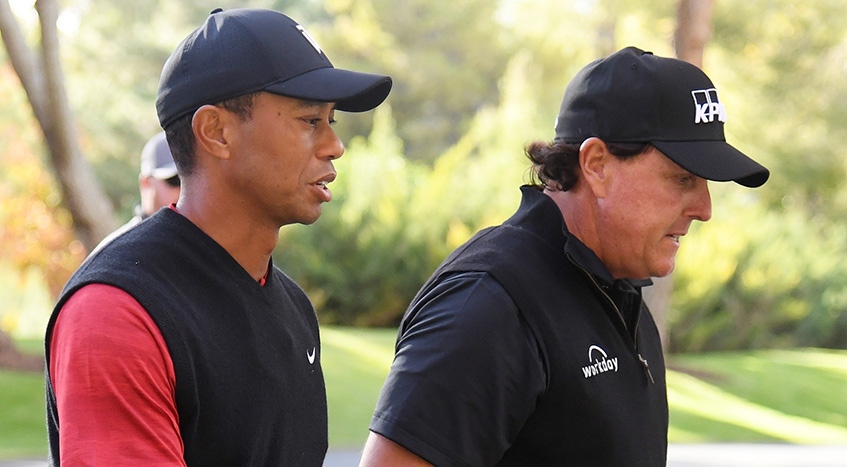 The golf world used to get excited about Phil Mickelson and Tiger Woods playing together in a PGA Tour event.

The two oldest players in the Zozo Championship field were paired for the 38th time in their careers to finish out what proved to be a pretty miserable week for both at Sherwood Country Club on Sunday afternoon.

The 50-year-old Mickelson, after winning on the Champions Tour last week, had a rude awakening at Sherwood.  After rounds of 72-74 and a Saturday 67 got him to five-under through 54 holes, he hit more than a few wild shots on Sunday and the result was an embarrassing 78.  He finished three-over.  Tiger tied for 72nd out of 77 players, Mickelson was solo 76th.

What the week showed is that neither player has their game in shape to factor at The Masters, which starts in 17 short days.

With temperatures in the high 50s and low 60s, Tiger got a taste of what the air might feel like at Augusta National, and that won’t sit well with his fragile body.

As for Phil, he found out what it’s like to be back in the big leagues after thrashing the over-50 set.

Now the question for both is — where will they play next.

Tiger said he’ll make the decision quickly as to a possible appearance at the Houston Open the week before The Masters.

“I’m not going to wait around on that decision and commit either way, one way or the other,” he said after signing his scorecard.  “We were talking about our progression and our training sessions and we’ll be in the gym tomorrow afternoon and get back after it that way, but I’ll make a decision quickly on whether or not I’m going to play Houston or not.”

“I did not drive the ball and didn’t hit my irons close enough consistently,” he said. “The only thing I can take out of this week that I did positively, I feel like each and every day and pretty much every hole is, I putted well. I feel like I rolled it great. Unfortunately, most of them were for pars and a couple for bogeys here and there, but not enough for birdies.”

As for Mickelson, he typically always plays the Houston Open but expressed concerns about the Tour allowing 2,000 fans on site.

“We didn’t play this week the way we wanted to,” Mickelson conceded. “I think it’s still in there, I just think it’s harder to get four solid rounds without the mistakes, and at this level the quality guys are so good that you just can’t make the mistakes that I’m making.”  Mickelson, if he decides not to play in Houston, could play this week in a Champions Tour event in Boca Raton.

As for both Phil and Tiger, there was nothing this week that showed either one can compete in the season’s final major.