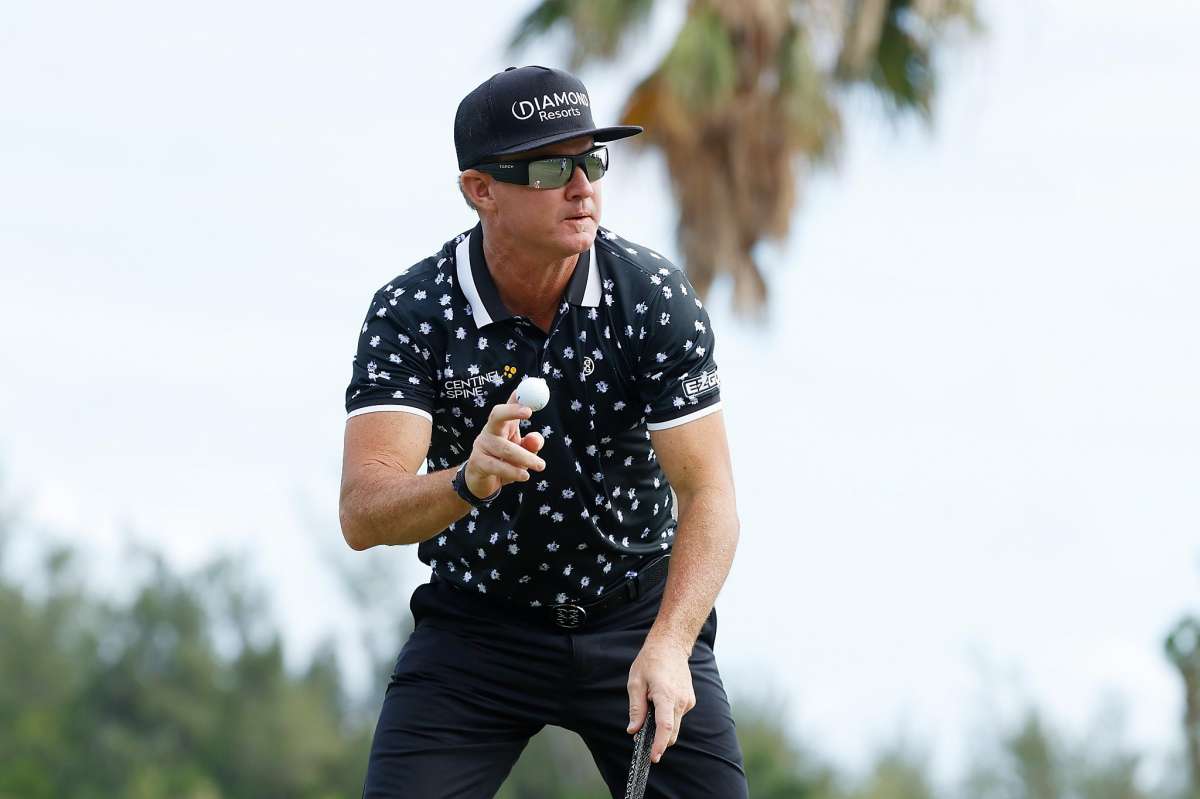 It’s big news, huge news in fact when someone not named Phil Mickelson wins on the PGA Tour at age 49.

Thus it was an eye-opener of sorts at the 2020 Bermuda Championship when Brian Gay collected his fifth career Tour victory.  He outlasted Wyndham Clark in a playoff — it took only one hole as Gay birdied the 18th.

Both players had a heckuva Sunday — Gay shot 64, Clark 65 and they finished tied at 15-under par.

The win was a career-saver for Gay, it put him on the PGA Tour for two years and this December, he turns 50 and can transition right over to a place where he’ll have better chances at victories — the Champions Tour.

It makes great sense for Gay because judging by his recent form on the PGA Tour — it’s been tough sledding for the former University of Florida golfer.

Gay missed the cut at Sanderson Farms then withdrew from the Shriners in Vegas.  Good news last season is that win in Bermuda helped him make the playoffs.  He didn’t last long with the big boys — a missed cut at the Northern Trust and he was one-and-done.  No surprise considering his form prior to the playoffs:  MC at the 3M, MC at the Barracuda, tie for 51st at the Wyndham.

Right now, Gay checks in at No. 392 in the Official World Golf Rankings.  That’s 10 spots down from the previous week.  December 14th (Gay’s 50th) can’t come fast enough, that’s the day he turns 50 and can get a mulligan on his career on the senior circuit where courses are shorter, a lot of events are only 54-holes and his wedge game and putting skills can serve him well.

Phil Mickelson says he ventures onto that over-50 landscape because it’s fun.  Perhaps that’s Lefty’s way of saying it’s just easier to perform well when you’re the young guy.

Perfect playground for Gay, who, believe it or not, has won $23.84 million during his time on the PGA Tour.  That puts him in pretty good shape as far as the PGA Tour’s pension plan goes.  It’s one of the best on earth and how it works and how much it pays players is a highly-kept secret.  Suffice to say, the Tour would have to fork out some serious dough once Tiger Woods decides to drink from that well.

Which brings us back to Gay where he’s just a footnote in this week’s field.

He even had a tough time getting to Bermuda.  He was supposed to fly in this past Monday but got bumped from the flight as the plane was declared “too heavy.”  He had to fly on Tuesday and with thunderstorms in Bermuda, that day was a washout meaning he’ll get in only nine holes in the Wednesday pro-am, which is a nine-and-nine, whatever that means.  What a pro-am without guys going 18 holes?

Bermuda is not the easiest place to get to.  It sits in the Atlantic Ocean, about 600 miles east of the North Carolina coast.  Then there’s the current Bermuda COVID restrictions.  Unvaccinated players would have to quarantine 14 days before arrival and the PGA Tour tells us that about 70 percent of its players have been vaccinated.  That’s pretty low considering the NFL is telling everyone that its rosters are north of 90 percent in the vaccine count.

Still, it’s Bermuda, it has full FedEx Cup points and a full exemption (two years) for the winner.

Which made life so very much easier for Brian Gay.