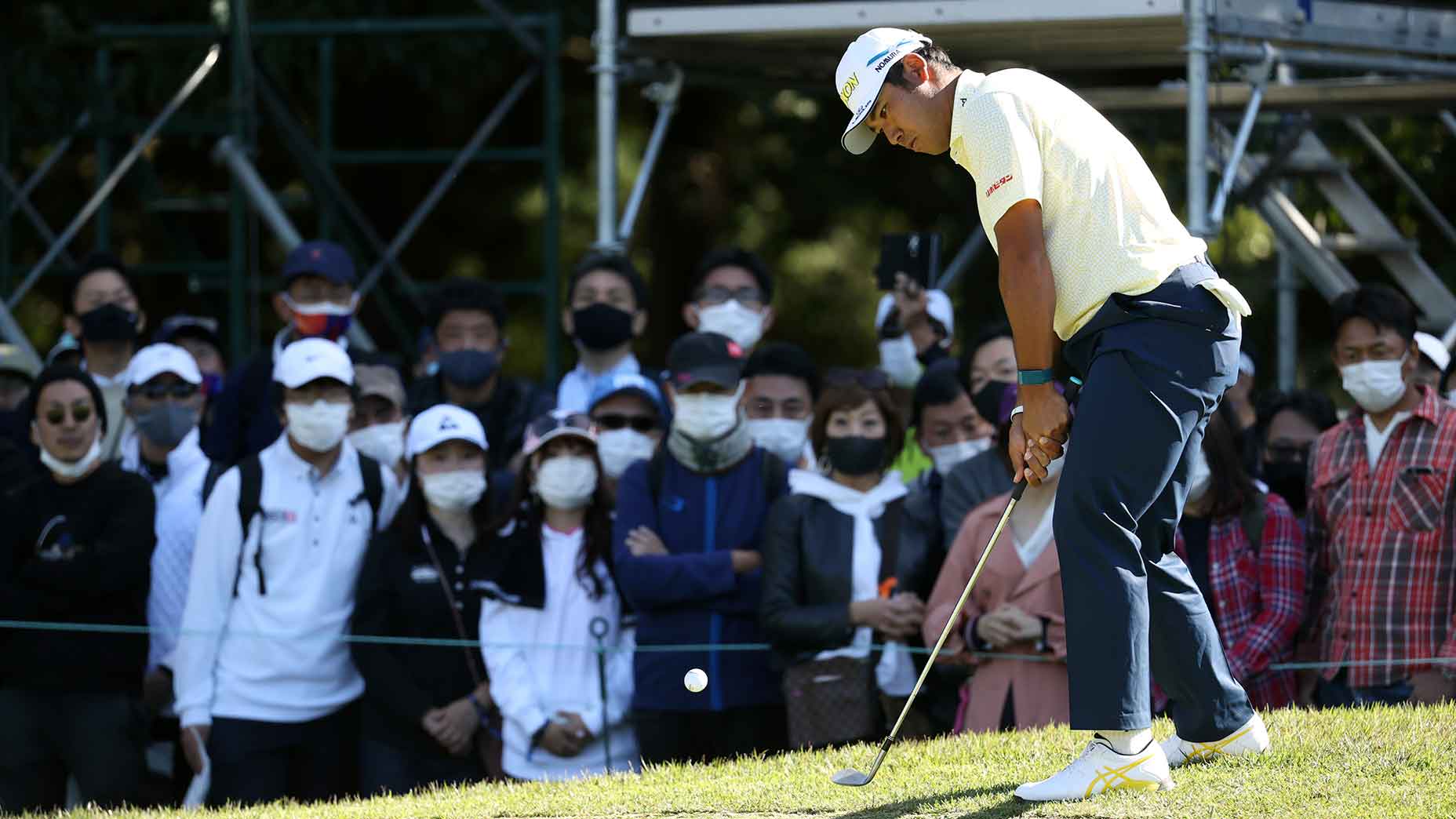 Asics are no longer just for runners -- just ask Hideki.

Golf clubs aren’t the only segment of the golf industry that has gone high-tech.

Last week in Japan, Hideki was sporting the new Asics Gel Kayanos — which are supposed to sport enhanced gel cushioning.  Asics has been known to long distance runners for years but now the footwear giant has cut a deal with Srixon — Matsuyama’s equipment sponsor.

The company has brought running technology to golf.  These shoes sport gel heel support and a lightweight material in the midsole called “Flytefoam.”  There’s also a new spike pattern that is supposed to offer better grip with the ground to create more stability in a player’s swing.

In the photo above, Matsuyama is wearing white with the familiar Asics pattern in yellow.

Did they help Matsuyama to victory?

Well, if he needed to run anywhere afterward, he could probably keep them on.

Let’s face it — with a winner’s check this week for the Bermuda champion of a “measly” $720,000, it’s more than a million bucks short of the $1,791,000 Hideki Matsuyama collected last week at the Zozo Championship.

Just about every top player in the world would thumb their noses at that sort of payout — and that opens the door for the outliers and the rookies.

That’s why 23 of the 27 new PGA Tour rookies will be in the field this week in Bermuda at Port Royal.

Highest-ranked player in the field this week is sand-shoveling, Ryder Cup-missing Patrick Reed.  Reed has fallen to No. 24 in the Official World Golf Rankings and perhaps this week presents a great shot for a guy with Reed’s skills to beat up on a field of “lesser” players.

What you will see this week are a lot of guys from the European Tour.

Ryder Cupper Matt Fitzpatrick from England is the second highest-ranked player in the field behind Reed, as Matt checks in at No. 26.

It may not be the richest event but it still pays off in FedEx Cup points.

A First For Matt Fitzpatrick:

It was an eye-opener event for Fitz himself.

Definitely,” he said on Tuesday. “I don’t think I’ve ever been a favorite for a tournament before.  It’s always nice, but for me what was also a big draw as well was that it’s gone to the standard 500 (FedEx Cup) points for a win.  It gives me obviously a great chance to get my season up and running and get off to a great start to try and make Tour Championship next year.”

Cancer-Fighting Brian Morris — Easiest Guy To Pull For This Week:

There’s a very courageous player in this week’s Bermuda Championship.

He’s 53-year-old Brian Morris,  head golf professional at Ocean View Golf Course in Devonshire, Bermuda.  He’s in on a sponsor’s exemption and it was a good choice.

“I used to be terrible with nerves,” Morris said in a recent interview.  “But since I got diagnosed with cancer, it’s like hitting a tee shot doesn’t really … like I embrace it now because I’m able to do it. I probably shouldn’t be according to the doctors and how my cancer was growing and stuff.  I’ve been past my expiration date, you know?”

Two years ago, he had surgery to remove a malignant brain tumor and has since learned the cancer has spread to his esophagus, stomach and neck. Due to various treatments, he says he has a hard time standing for more than a half hour, which is why he’ll be permitted to take a cart at Port Royal.