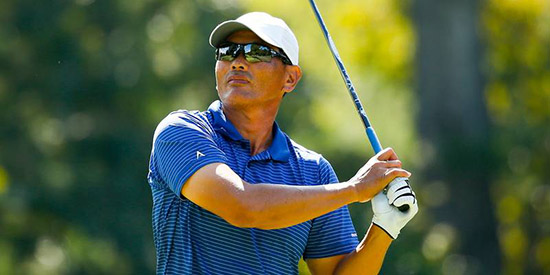 Ken Tanigawa birdied two of the final four holes at Oak Hill for a one-shot victory.

Paul Broadhurst pretty much controlled the Senior PGA for the first three rounds.

The defending champion went into the final 18 at beastly Oak Hill as the odds-on favorite to go back-to-back in this senior major.

But things didn’t work out for the Englishman down the tough Oak Hill stretch.  Despite a two-over par front nine, Broadhurst still found himself in the lead at four-under par through 15 holes.

Disaster struck at 16 in the form of a double-bogey six.  Another bogey at the 18th and Broadhurst didn’t even hang on for second.

Ken Tanigawa took advantage of the collapse by the defending champion but birdies on two of his final four holes that gave him an even par round of 70 and a winning three-under par total.  He edged Scott McCarron by a shot.  Broadhurst finished solo third at one-under and they were the only three players who managed to shoot under par at the esteemed Donald Ross design.

Ironically, Tanaigawa beat his old college teammate for the title.

Tanigawa grew up in southern California and was teammates with McCarron and Brandt Jobe at UCLA. He spent 11 years playing professionally in Australia, Asia and Japan before eventually giving up playing professionally after 2003. He joined the PGA Tour Champions last year after tying for fourth in the qualifying tournament.

England’s Bronte Law got her break-through win on the LPGA Tour Sunday at Kingsmill, thanks to a closing 67.

Law, a former UCLA golfer, shot 67-67 over the weekend and her 17-under par winning total bested three players at 15-under, including Canada’s Brooke Henderson.

Henderson’s 68 gave her a share of second with Madeline Sagstrom (66) and Nasa Hataoka.