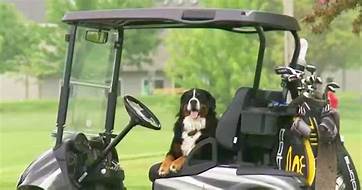 Notice To John Daly: You Are NOT Competitive.

Posted By: Tom Edringtonon: May 24, 2019In: In The DoghouseNo Comments

John Daly keeps telling everyone the reason he played in the PGA and the reason he wants to tee it up in the Open Championship at Royal Portrush is that he “is still competitive.”

We’re not sure what Daly’s definition of “competitive” might be.

The last week’s Senior PGA, note “Senior” as it was the gathering of old guys.  Daly, with rounds of 79-74 at Oak Hill, was a cool 13-over par.  And yes, he did miss the cut. Is that competitive?  Not even in a senior setting.

Yet Daly wants to ride around Portrush in Northern Ireland at the 2019 Open Championship in July, take in the scenery and miss another cut in a major championship.

The R&A should have this under consideration and politely decline to grant Daly a “buggy.”

No one rides over there.  The entire country walks when it plays the game of golf.

No buggy for Fatso — please.

He can go play in the Senior British and miss that cut.