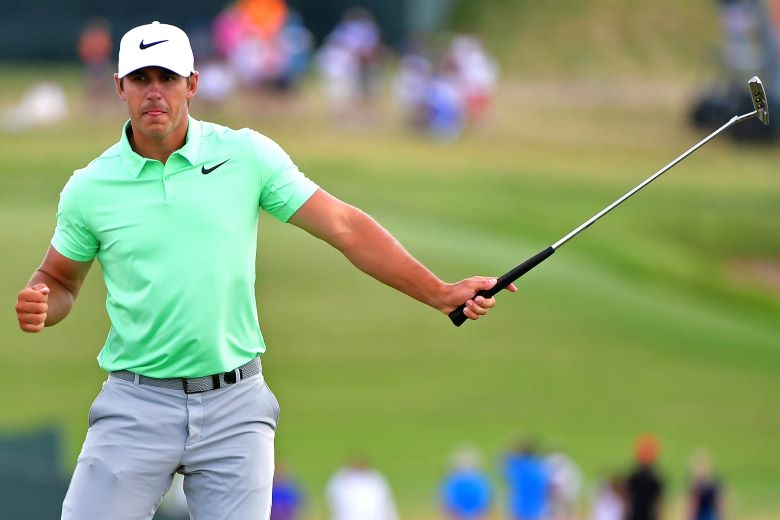 Brooks Koepka will play in back-to-back events at Muirfield Village.

The last time we saw Brooks Koepka, he was withdrawing from The Travelers after his caddie, Ricky Elliott, tested positive for COVID-19.

Koepka went home to West Palm Beach but he’ll be back in action for an unprecedented “double-header” at Muirfield Village.

Keopka will be in this week’s Workday field, the first of two events at Jack Nicklaus’ home course outside Columbus, Ohio.  It hasn’t been confirmed that Elliott will be on his bag this week.

The Workday event replaces the John Deere, it is a full-field event while Nicklaus’ Memorial event is a limited field invitational.

Brooks will be joined at the Workday by world No. 2 Jon Rahm and No. 4 Justin Thomas.  One player who won’t be in the field is world’s No. 14 Tiger Woods, who has won Nicklaus’ event at Muirfield five times.

After his caddie’s positive test, Koepka confirmed he tested negative.  “I haven’t tested positive for COVID-19, but as I’ve said all along, I’m taking this very seriously,” Koepka said last week. i

Chase Koepka, Brooks’ younger brother, who withdrew from The Travelers because he practiced in a group with his brother and caddie Elliott, will get into the Workday on a sponsor exemption.

Viktor Hovland hit a milestone this past week when he broke into the world’s top 50 in the Official World Golf Rankings. He jumped from 53 to 45.

At the just-completed Rocket Mortgage Classic, Hovland scored a tie for 12th at 14-under par and will no doubt rise higher when this week’s rankings come out.

He’s making himself a possibility for future European Ryder Cup teams as he hails from Norway.

PGA Tour Will Have Series For Cancelled Tours:

One sad sidenote from the Corona Virus pandemic is that the PGA Tour basically cancelled the seasons for the Mackenzie Tour, the Latinoamerica Tour and the PGA Tour China.

The Tour, feeling bad for all those players left with no place to play, will conduct a series of eight tournaments, starting in August, for players from those respective tours.

The fields will be filled with international tour exempt members, some Korn Ferry Tour players, sponsor exemptions and top performers from previous event. The series will rank exempt international tour members based on their respective tour eligibility.