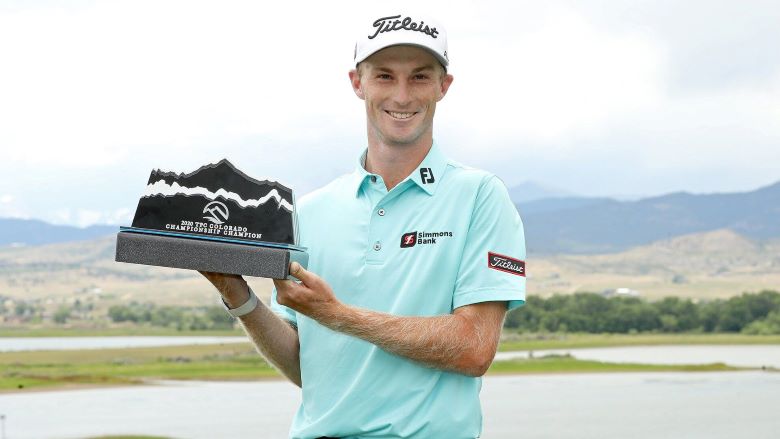 Will Zalatoris closed the deal and won Saturday with a final round 69.

Will Zalatoris has the pedigree and resume to make it to the PGA Tour.

Only problem is that the former ACC Player Of The Year at Wake Forest, found the path long and unforgiving in the professional ranks.

Zalatoris didn’t do much with the tour starts when he was out of school but he did earn conditional Korn Ferry Tour status last year and turned that into a full KFT Tour card.  When the season was suspended in March, he sat 18th in points but also facing the new reality of the new Korn Ferry mega-season with no graduation to the PGA Tour possible until fall 2021.

Six of Zalatoris’ Walker Cup teammates from the 2017 U.S. team are on the PGA Tour —  Collin Morikawa,  Cameron Champ and Davis Riley.  Riley, Zalatoris’ roommate and the player Zalatoris beat in the final of the 2014 U.S. Junior Amateur, recorded his first pro victory earlier this year at the KFT stop in Panama.

So the pressure has been on Zalatoris to be “next.”

He came close to winning three weeks ago at the Korn Ferry re-start at TPC Sawgrass, but he ended up falling into a tie for sixth on the final day.  He then followed that up with a tie for third and solo fourth in the next two KFT events.  He was on the KFT points list heading into this week’s TPC Colorado Championship.

Last Saturday, he got the job done, winning the TPC Colorado Championship.  He closed with 69 after rounds of 67-67-70 to shoot 15-under par and edge Chase Johnson by a shot.

Zalatoris was close — his last vicotry, amateur or pro —  came during the fall of his senior year at Wake Forest, at Duke’s Rod Myers Invitational, in 2017.

But this time he closed the deal and can think about two more wins and an instant promotion to the big leagues.  “The goal is to get on Tour,” he said, “and don’t look back.”