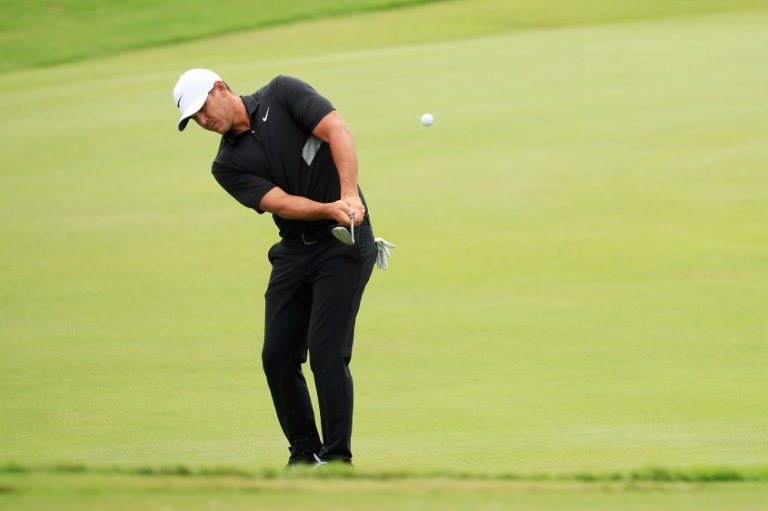 Brooks Koepka was great through 20 holes then things went all wrong.

On Thursday, there was the amazing Brooks.  Koepka looked totally flawless in his first round after a long layoff and a lengthy rehab process for his wounded left knee.

The world’s No. 1 had little to no trouble getting around the plush Abu Dhabi Golf Club.  He hit enough greens to have a bunch of looks at birdie and he’d convert enough to shoot a six-under par 66 that put him right in the thick of things.  He ran circles around playing partners Shane Lowry and Tommy Fleetwood, who have won the last three events in Abu Dhabi.  Koepka’s short game was impressive, especially his delicate chip at the 17th that he holed for birdie.

Koepka was quite pleased with that first-day effort. He pointed out the lack of wind and said he need to take advantage of that and he did.

On Friday, Koepka’s start couldn’t have been better — he went birdie-birdie at one and two to get to eight-under and a share of the lead.

Then golf said “not so fast, Brooksie.”  He made bogey at the third, a sloppy double at the fifth then a mind-boggling bogey at the par five eighth.  Still, he was only one-over at the turn then got it back to even with birdie at the par five 10th.  His sporadic day was sporadic again at 11 and he made double there.  He was looking like a guy who hadn’t played competitively since September.

He settled down a bit with six straight pars coming home then managed a perfect drive at the 18th then an imperfect second that was well right of the green on the reachable par five.  He short-sided himself then left his third short in a greenside bunker.  This was sloppy Brooks at best.

Koepka suffered one last indignity.  He missed his four-foot par putt and put 75 on his scorecard.  His three-under total tied playing partner Tommy Fleetwood, winner of this event in 2017 and 2018.  Defending champ Shane Lowry went awry with Koepka and a bogey-bogey finish send the 2019 champ home early.  His even par total missed the cut.

As for Koepka, 66-75 tied him for 33rd and showed that he is indeed rusty, as might be expected.

As good as his putter was on Thursday, it was bad on day two.  Good news for Koepka is that he’ll have two more rounds to figure out what went wrong.  Wild drives, wayward approaches and missed putts — that’s a lot of figuring ahead of him.  Or perhaps it was simply a bit of fatigue.  Koepka hasn’t walked 36 holes in two days in three months.

Meanwhile,  there was no shortage of players going low.

Sergio Garcia, who is now 40-years-old, is in the hunt after rounds of 67-69.  He’s playing with new equipment.  He parted ways with Callaway and is now basically a free agent.  One of the big factors in the departure was Garcia’s desire to play the TaylorMade golf ball.  He was swing PING clubs and using a PING putter and using it quite well after two days.

“Unfortunately our relationship with Callaway didn’t go any farther. So at the moment, I’m a free agent. So I’m playing whatever I feel that — feels best for me or fits me best. That’s where we are and that’s what I’ve been working on this Christmas break,” Garcia said.

Young Matt Fitzpatrick got out early Friday and his 67 got him to nine-under.  He’s made at least one big change, he’s chipping cross-handed.  By day’s end, he was a shot behind halfway leader Francesco LaPorta of Italy.  LaPorta holed a nifty downhill 10-footer at the 18th to finish his round of 63 with five straight birdies.  The 29-year-old Italian has never won on the European Tour.

Look for more birdies on the weekend.  The greens are perfect and if the wind stays down, it’s headed for a shootout.

As for Koepka, it’s just a start.

Good news is he made the cut, which is something he needed to do after getting that fat million dollar appearance fee.