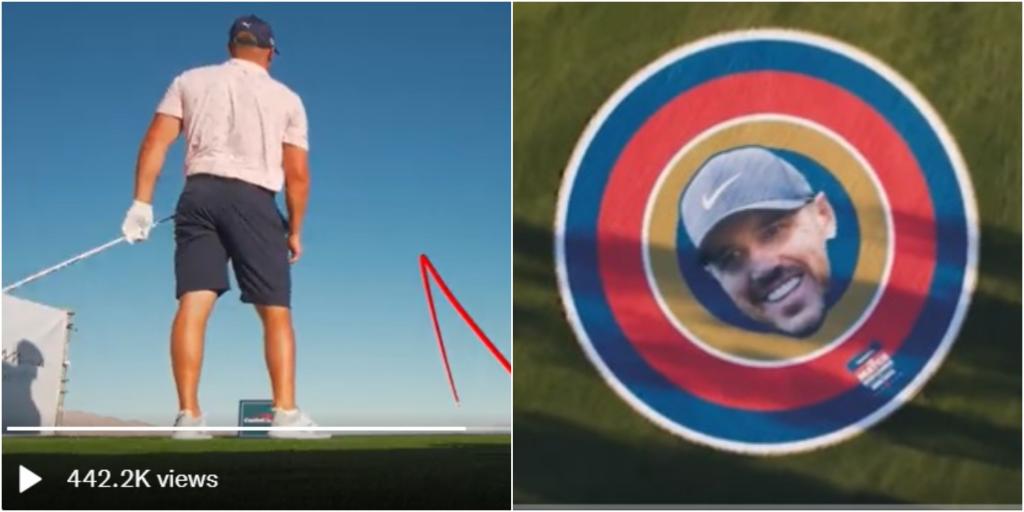 Last week, while Collin Morikawa was walking away with $4 million over in Dubai, Bryson DeChambeau was taking aim at a giant Brooks Koekpa target from the top of the Wynn Hotel in Las Vegas.

It was a little pre-match hype with Bryson on the rooftop of the 60-story hotel, taking aim at a giant target with Koepka’s face on the fairway of the adjacent Wynn Golf Club.

This latest version of The Match comes this Friday, the day after Thanksgiving — the festivities begin at 4 p.m. (ET) and for your viewing (or streaming) pleasure, it will be on TNT, TBS and TruTV.

Strange thing about this is the format — 12 holes.

Best thing about this possible turkey is the commentary — Phil Mickelson teaming up with Charles Barkley — now there’s a potential comedy team if there ever was one.  The Mickelson-Barkley banter could totally overshadow the match — it’s a personality mismatch — Mickelson and Barkley vs. Brooks and Bryson.

As for the site, this “new” Wynn Golf Club is the redesigned course that was the original home for the Tournament of Champions back in the day.  If you want to go deeper into Vegas history — the Wynn itself sits on the old site of the Desert Inn as it was known back in the “Rat Pack” days of Las Vegas.

The oddsmakers don’t know what to do with this match — it’s your basic tossup.

Koepka’s game hasn’t been impressive as of late — in fact, it’s just the opposite.  Brooks has missed the 36-hole cut in his last two events — the Houston Open and down at Mayakoba.

There’s also news on the Koepka equipment front.  Brooksie’s been your basic equipment free agent for the past five years but now, evidently, Srixon/Cleveland Golf has dangled a big fat carrot in front of Brooksie’s nose the he’s signed on with the company.

It’s a multi-year deal, most likely Srixon/Cleveland is throwing something in the neighborhood of $4 to $5 million a year at Koepka, after all, he’s a multiple major winner.

It gives Srixon a second high-profile staff member.  Hideki Matsuyama has been the primary face of the brand.

As part of his deal, Koepka will play a Srixon ZX5 driver, ZX7 irons (four-iron through pitching wedge), Z-Star prototype golf ball and Cleveland RTX ZipCore  wedges.  They’ll all be in Brooksie’s Srixon staff bag for “The Match.”

Koepka will need to get comfortable with the driver, wedges and ball, as he’s never played them on Tour but the irons won’t require an adjustment period.  Koepka first started playing the irons last January at the American Express and found the winner’s circle two weeks later with them at the Waste Management Phoenix Open.

Recent form hasn’t been that great — witness the pair of missed cuts in his last two outings.

So what if Brooksie actually loses to Bryson on Friday?