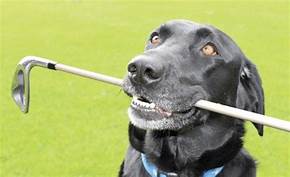 Bryson And His Putter Head To The Dog House

Posted By: Tom Edringtonon: February 24, 2020In: In The DoghouseNo Comments

If Bryson DeChambeau has any doubts why he didn’t win the WGC-Mexico, he need look no further than his putter.

The Mechanical Man, who looks so rigid and stiff over his putts, had it going on Friday and a bit on Saturday — but after that it got stale in a hurry, especially during Sunday’s final round.

DeChambeau started his day by driving the par four first hole then promptly three-putting from a measly 22 feet.

He three-putted at the eighth hole from 40 feet — nice touch Bryson.

Of course he had no chance to two-putt from 63 feet at the par three 17th and that untimely bogey did him in.

Finally, needing a birdie at the final hole, he lined up a 20-footer and then left it a whopping four feet short — obviously he put the death grip on that first putt.

All in all, you can’t three-putt three times in the final round with an elite field of challengers around you and expect to win.

Enjoy your stay in The Dog House, Bryson.  And oh yes, take that awful putter with you when you leave.