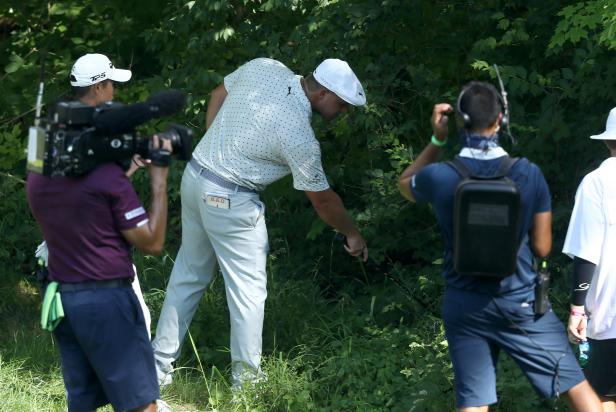 This was the beginning of Bryson's problems at the par five 15th on Friday.

Bryson DeChambeau seemingly lost his mind, at least for a moment Friday at The Memorial and the result was a total disaster.

DeChambeau, who has seven straight top 10 finishes on tour, put an end to that streak with his play at the par five 15th at Muirfield Village.

DeChambeau, who opened with a 73 on Thursday, was even par for his round after making a bogey at the 14th hole.  He stepped up at 15 and hooked his tee shot wide left, into the creek that runs down the hole, deep in the woods.  He took his penalty and made his drop.  His ball settled into a gnarly lie and with 241 to the hole he had no reasonable path to the green.  That didn’t stop him.

DeChambeau took a fairway wood, tried to hit a hook from the nasty lie and blew it way right, out-of-bounds.  Out in three, back in four, hitting five.  He didn’t try to punch out, instead, he opted to try the same shot.  Same result — he blew it way right, once again, out-of-bounds.  Out in five, back in six, hitting seven. Still, he did not choose to punch out.

“I think he’ll “Tin Cup” it,” said host Jack Nicklaus as everyone realized DeChambeau was headed for a number — a big number.  His seventh once again headed way right, this time it stayed in, bounced on a cart path, rolled toward the green and nearly went into a hazard short of the green.  Before he hit his eighth shot, he argued with a PGA Tour official, contending his second OB was actually in-bounds and asked for a second official.

The second opinion was a total waste of time.  The second official explained it to him again, Bryson argued again, but to no avail.  He hit his eighth onto the green and two-putted for a big fat 10.

DeChambeau’s “Tin Cup” moment cost him a place in the field for the weekend.  Instead, he shot 42 on the back nine for 76 and his five-over total missed he cut by a slim two shots.  The punch out would have saved him.

On this day, he showed that his great distance can be both a blessing and a curse.

It was a horrible two days for world’s No. 4 Dustin Johnson.  D.J. opened with an 80 and shot another one on Friday — dueling snowmen.  He wasn’t the only top 10 player to miss the cut.  No. 5 Webb Simpson shot 76-74 and No. 7 DeChambeau exited early thanks to his adventure at the 15th.