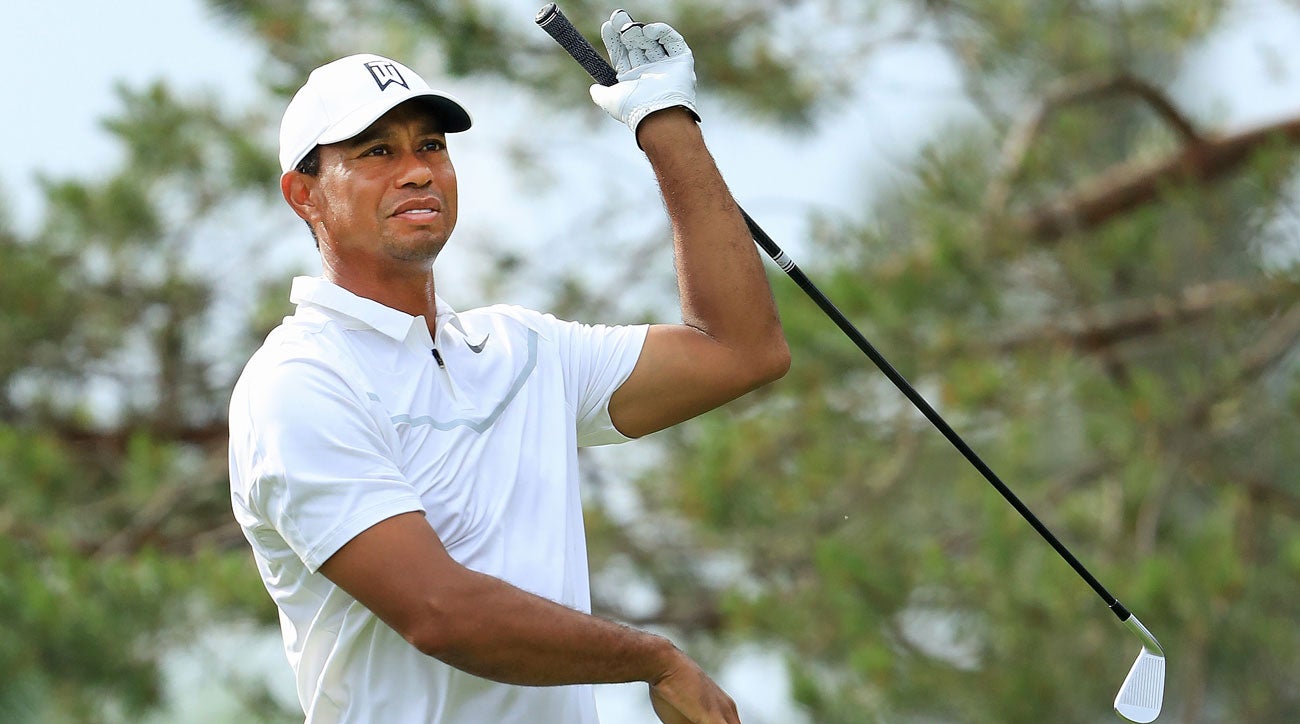 Tiger Woods lost shot after shot wide right during the second round.

Tiger Woods Battles His Back But Grinds It Out At Memorial

Friday started early for Tiger Woods, 8:17 a.m. to be exact and it would turn into a very, very long day at The Memorial.

Woods, who looked a bit rusty on Thursday, found himself struggling mightily on Friday with his fragile back act up early and often.

“Not very good,” was how Tiger summed things up after a day-long grind saw him shoot 76 and left him dangling on the cut line.

“I wasn’t quite moving as well as I liked.  It started this morning during warm-ups.  It is what it is.  It’s gonna happen more times than not,” he lamented.

Woods fought it all day.  He was unable to maintain his posture and lost shot after shot to the right, making it near-impossible to score from the thick Muirfield Village rough.

His first sign of trouble came when he missed a short birdie putt at the 11th, then nullified a birdie at 12 with another short miss inside three feet at 13.  He made the turn two-over then just about ended his hopes with a double-bogey, bogey start on the front, his second nine.

Things looked worse after another bogey at six but Woods, ever the grinder, birdied two of his final three holes for 76 and a three-over total.

Then he had to hang around all day to see if he’d make the weekend.

“I would like the opportunity to play tomorrow (Saturday), he said.

Woods acknowledged that at age 44, it’s hit and miss for him.  “Aging is not fun.  Early in my career I just kept getting better and better.  Now, I’m just trying to hold on.”

He held on enough to make the cut, and he’ll have a chance to get some therapy for his back and see what awaits him on Saturday.  Hopefully his back will allow him to find more fairways and he’ll need to improve on his putting after taking 60 putts for the first two rounds.

In the meantime, he’s battling hard against an unbeaten opponent — Father Time.

Ryan Palmer is the co-leader at nine-under par along with Tony Finau.  After his results at Muirfield Village last week at the Workday, it’s hard to fathom.

He’s made only one bogey in two days, best effort of anyone in the field.  “Today was huge,” Palmer said.  “Today’s round was better than yesterday’s.”

Palmer flew back to Dallas last week and spend time with his instructor — Randy Smith.  He found that he had a closed club-face on his takeaway.  When he arrived back at Muirfield Village this week, he sought out Steve Stricker, played nine holes with him and got a short game lesson.  Palmer also dug out an old “Rossi” putter when he was home and put it back in his bag.

The rest is history.

Things didn’t start well Friday for overnight leader Tony Finau.  He started on the back nine and bogeyed two of his first three holes.  He made two birdies before the turn to get back to even for the day and six-under, where he started.

Three birdies, no bogeys coming home and he backed up his 66 with 69 to share the halfway lead with Ryan Palmer.

Finau continued to up his driving distance on selected holes, taking the hint from Bryson DeChambeau.

Finau said he will keep “the extra gas in the tank and keep riding that into the weekend.”

Rahm-bo Just One Shot Back:

The most dangerous man near the lead is world’s No. 2 Jon Rahm.  Rahm added a 67 to his opening 69 and he’s just a shot off the lead at eight-under.

Rahm was bogey-free for his round until his next-to-last hole, the dangerous par three eighth.  He pulled his tee shot into the left greenside bunker.  He hit a not-so-great blast and left himself 19 feet for par.  He made bogey but bounced back with a birdie at nine to give himself momentum heading into the final 36 holes.