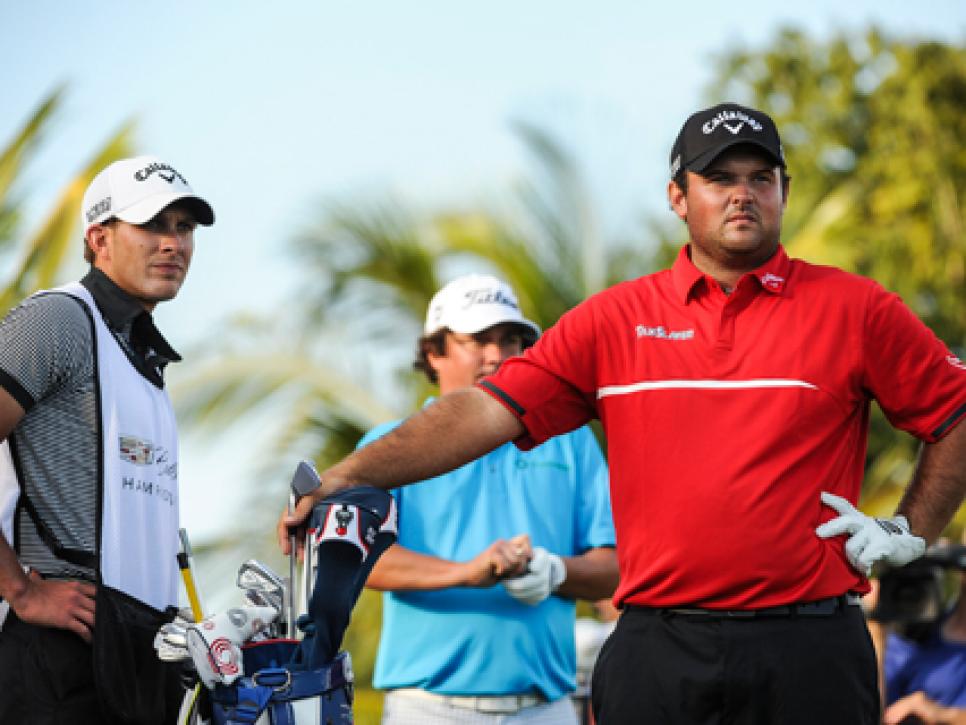 Patrick Reed confirmed that it was COVID that put him in the hospital.

Patrick Reed: COVID-Recovering And Playing Only For The Ryder Cup

First diagnosis for what landed Patrick Reed in a Houston hospital last week was double (bi-lateral) pneumonia but this week as he showed up to compete in the Tour Championship, Reed told a different tale — the culprit that took him down was indeed, COVID.

Reed put the details in a text to the Golf Channel:

“My primary diagnosis was bilateral pneumonia.  I was vaccinated for COVID-19 so I’m not sure if I had the delta variant but I’m just really happy to be able to be here and I’m feeling much better.  It was very scary, the pneumonia had infiltrated my lower lobes of my lungs, but I feel very fortunate that I was very well taken care of.”

Reed also acknowledged that he was later diagnosed with COVID and admitted he was in bad shape in the hospital for nearly a week.

Good news for Reed was that K.H. Lee’s 72nd hole bogey at the BMW Championship last week, took Lee out of the 30th spot and cleared the way for Reed to make it to East Lake.  After clearing all the protocols for COVID, he’s at East Lake and he’s under the microscope of Ryder Cup captain Steve Stricker.  There’s one school of thought that has Reed as a lock to be a Stricker captain’s pick next week.  There’s another school of thought that says look at his record the past few months.

In July, he finished tied for 32nd at the Rocket Mortgage, missed the cut at the Open Championship and tied for 34th at the 3M.

In August he tied for 22nd at the Olympics then tied for 31st at the WGC-St. Jude in Memphis, then withdrew from the regular season-ending Wyndham Championship, citing a bum ankle.  Reed missed both playoff events and he owes K.H. Lee an expensive “Thank-You” gift.

Not exactly captain’s pick-worthy performances and it was recent performance that knocked PGA Champ Phil Mickelson out of playing spot and into a vice captain’s golf cart.

There has to be major heat on Reed to play well this week.  He’s done well at East Lake with top 10 finishes in the last two Tour Championships but this time it’s different — how will his game look considering the hospitalization and the fact he hasn’t played competitively since WGC-St. Jude?

Reed, in fact, confirmed before play began that the only reason he’s at East Lake is because this is a Ryder Cup year and he desperately wants to be on the team, otherwise, he’d have passed.

His first round on Thursday was held together only by his amazing short game skills.  He was all over the place with his iron shots — he had the two-way missing going and as a result, hit only five greens on the day.  He’d finish with a two-over par 72 and he basically turned 80 into 72.  It was that ugly with the approach shots.  That left him tied for 28th on day one.

On the opposite end of the leaderboard was Patrick Cantlay and his 10-under par head start.  Cantlay looked every part of the guy who can take it all.  He was steady and calculating on his way to 67 that put him at 13-under, just two better than world’s No. 1 Jon Rahm, who made a big move with 65 and made up two strokes on the stagger-start.  “It’s a tough test out there,” said Rahm, who had seven birdies on his card and it was only back-to-back bogeys at seven and eight that prevented him from tying Cantlay right out of the box.  “I made up some ground — a lot of golf to be played,” Rahm added.

Harris English made up a lot of ground.  He shot 66 and jumped up to a tie for third with Bryson DeChambeau, who treaded water and finished the day where he started — eight under par thanks to an opening 70.  English had the shot of the day when he crushed a perfect five-iron on the scary 15th that ended up in the cup for an ace.

Rahm was correct on this.  There’s a lot of golf to be played and yes, there is a tournament within the tournament — so to speak.  There are those six captain’s picks coming from Stricker when all of this is over.  English put his name at the top of the list and Reed’s playing partner, Billy Horschel, tied Rahm for the day’s best round, shooting 65 and clipping Reed by seven shots.

Unlike last week, East Lake is ready to defend itself with Bermuda rough that demands a little more accuracy off the tee that at Caves Valley.

Most of all, Rahm paid it tribute with the simple thought: