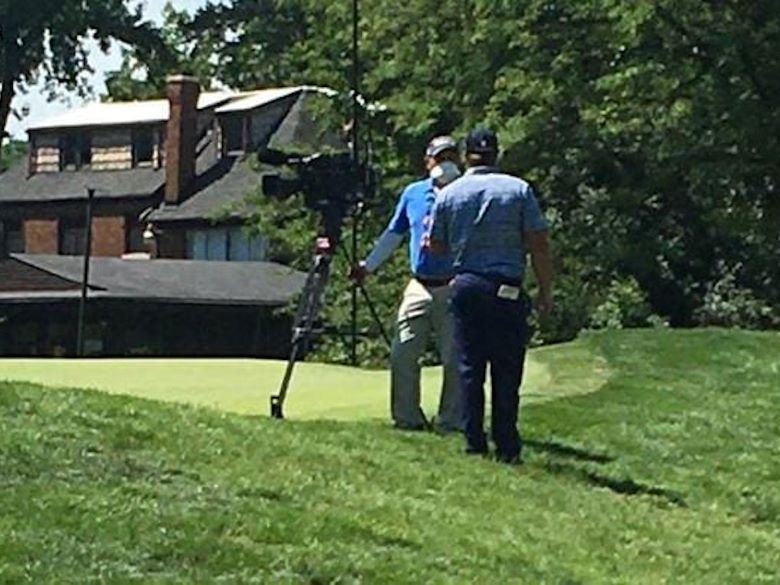 Bryson DeChambeau got after a camera operator last week in Detroit.

Bryson DeChambeau went all hissy and wimpy and whiny last Saturday at the Rocket Mortgage.

He hit a poor shot from a fairway trap then did a Sergio Garcia imitation and slashed at the sand to show his frustration.

A television camera was on him when DeChambeau threw a tantrum and Bryson didn’t like that.  He admonished the camera operator for seeking to damage Bryson’s “brand.”

Bryson did more complaining after that round:

“So there was something that happened – I mean, nothing crazy, but I had a cameraman that was filming me after I hit a bad bunker shot and whiffed the sand a little bit, which I shouldn’t have done, that was dumb,” DeChambeau said. “But at the end of the day, he was literally watching me the whole entire way up after getting out of the bunker, walking up next to the green and I just was like, ‘Sir, what is the need to watch me that long?’

“I mean, I understand that it’s his job to video me, but at the same point, I think we need to start protecting our players out here compared to showing a potential vulnerability and hurting someone’s image,” he said. “I just don’t think that’s necessarily the right thing to do. Not that I was going to do anything bad. It’s just one of those things that I hope he respects my privacy.

“As much as we’re out here performing, I think it’s necessary that we have our times of privacy as well when things aren’t going our way. I mean, we’re in the spotlight. If somebody else is in the spotlight they wouldn’t want that, either. It’s just something about respect I think that’s necessary on that end. You know, so for me I feel like it’s one of those things that we had a conversation. It was all good after that.”

Ironically, the camera took a break and the incident in question wasn’t shown.

DeChambeau felt that players could be hurt if caught “at a potentially vulnerable time.”

“We’re not necessarily – we don’t mean anything by it, we just care a lot about the game,” he said. “For that to damage our brand like that, that’s not cool in the way we act because if you actually meet me in person, I’m not too bad of a dude, I don’t think.  So that’s the thing – I hope we can get to the point where everybody understands that we just care a lot about the game, we want to do well, we’re passionate about what we do and we want everybody to enjoy the entertainment. We don’t want negative stuff coming down.”

DeChambeau fails to understand that a player like Tiger Woods has had cameras constantly on him during every bit of his round.  The mics have caught numerous Tiger “F-Bombs” but Woods understands it is the cameras that provide exposure and that exposure translates into endorsement dollars.

Someone needs to take DeChambeau aside and discuss that with him.

PGA Of America Gets Rid Of Horton Smith’s Name:

The PGA Of America drew major flak regarding the Horton Smith Award.

Seems the first winner of The Masters took a firm stance on barring black golfers from PGA Of America membership.  Back in the day, the PGA Of America was the entity in charge of what is today the PGA Tour.

Here’s the official statement/announcement with the decision:

“In renaming the Horton Smith Award, the PGA of America is taking ownership of a failed chapter in our history that resulted in excluding many from achieving their dreams of earning the coveted PGA Member badge and advancing the game of golf,” PGA President Suzy Whaley said in a press release. “We need to do all we can to ensure the PGA of America is defined by inclusion. Part of our mission to grow the game is about welcoming all and bringing diversity to the sport.

“With the new PGA Professional Development Award, we will recognize effective inclusion efforts and honor those across our 41 PGA Sections who continue to promote and improve our educational programs. We look forward to doing more of both as we move forward.”

British Open, Scottish Open A Go — For The Ladies:

Good news for women’s golf.  There will be a British Open and Scottish Open next month.

Both will be played without spectators on site.  The Ladies Scottish is set for August 13-16 at the Renaissance Club outside Edinburgh in North Berwick.  The Women’s British will go the following week — August 20-23 at Royal Troon in South Ayrshire.

“The Women’s British Open is important to the success of women’s professional golf,” R&A chief executive Martin Slumbers said. “We have been working closely with our title sponsor AIG, Visit Scotland, Royal Troon and our key advisors to find a way for the championship to be played safely this year.

Earlier this week, the U.K. exempted select foreign athletes from 14-day quarantine requirements. The Scottish government has assured the sponsors and tournament directors that it will ratify that exemption to clear the way for the competitions.