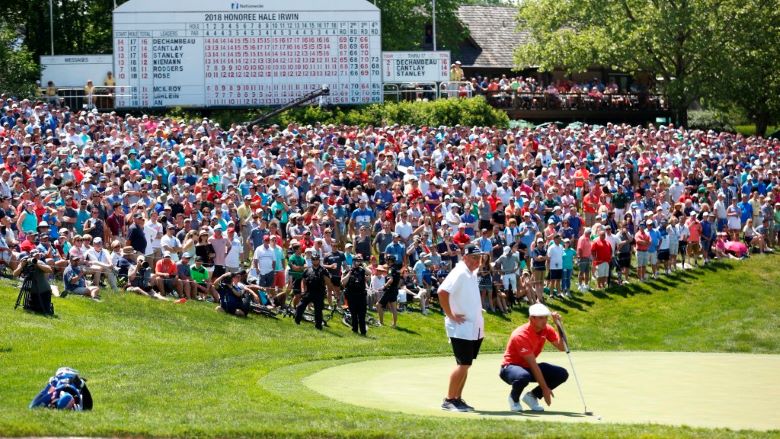 There will be no spectators at The Memorial to see the return of Bryson DeChambeau.

The PGA Tour has gone without fans for five weeks now, counting this week at the first of two at Muirfield Village.

The fans were supposed to be back next week for The Memorial at the course that Jack built.  But now that won’t happen.

In a reversal of plans, The Memorial will join the ranks of the no-spectator events.  Hope was that Jack Nicklaus’ invitational event would be the first Tour event to have fans in attendance.  Ohio Governor Mike DeWine put that idea in motion a month ago and up until two weeks ago, protocols were outlined for a limited number of spectators at the second of two straight events at Muirfield Village.

On Monday, the Nicklaus family and the board for The Memorial announced the change in plans.

The announcement comes on the same day that a report by the Ohio Department of Health showed a spike in COVID-19 cases and hospitalizations across the state. After dropping to 381 total cases on June 12, the rolling seven-day average for new cases has more than doubled to 977 a day through Sunday, according to the ODH report.

“While we embraced the opportunity to be the first PGA Tour event to welcome the return of on-site fans—and be a part of our nation’s collective reemergence from the COVID-19 crisis—we recognize the current increase in positive COVID-19 cases across the country and our ultimate responsibility.  It’s disappointing to the many who have tirelessly worked to create a plan for on-site patrons, but I’m confident the learnings from these efforts will contribute to golf’s continued success, and we’re excited to showcase Muirfield Village Golf Club—and ultimately, the Memorial Tournament—to our fans over the next two weeks.”

How Muirfield Village Will Differ For The Two Events:

The Workday will be a full-field, 156-player tournament while The Memorial is a smaller field invitational.  The challenge is to present two different courses for two distinct fields.

The three main differences will be green speeds, length of rough and pin positions.

“We are trying to not over-stress the greens over a two-week period,” said Chad Mark, director of grounds operations at Muirfield Village. “We do want to save the turf, but the real reason, the main reason that we want the greens slower the first week is so that we can use different spots on the greens for hole locations.

“We have to slow the greens down to promote the kind of versatility the tour wants in the setup of the golf course,” Mark said. “They want eight distinct pin positions for the two events. To do that, we have to keep the speeds down. For instance, you can’t go front-left at No. 10 or front-right on 4 if you have greens of 13-plus. So we have to temper the speeds. For the Memorial, we will use traditional tournament pins.”

There’s also the fairway divot problem.  The grounds crew will be constantly filling divots and in some cases, cutting sod  from the practice area to fill in the worst areas.

Once the second event, The Memorial is completed, the course will be shut down for a major renovation which will include rebuilding all 18 greens.

The day after the Memorial, the course will be shut down to complete an overall course renovation, which will include rebuilding all 18 greens.

Reports have been coming for the past couple of weeks regarding the postponement of the 2020 Ryder Cup.

The PGA Of America will make it official sometime on Wednesday.

The speculation had been built up by reports in the U.K. newspapers — The Telegraph and The Guardian — that the matches would indeed be postponed due to the COVID-19 pandemic.

This 43rd playing of the matches was scheduled for for September 25-27 at Whistling Straits in (Herb) Kohler, Wisconsin.  The matches are now slated for near the same time next year.

Now the PGA Tour will likely move the Presidents Cup to the fall of 2022.  It was set for late September, 2021 at Quail Hollow in Charlotte.  The Ryder Cup in Rome will move to 2023.