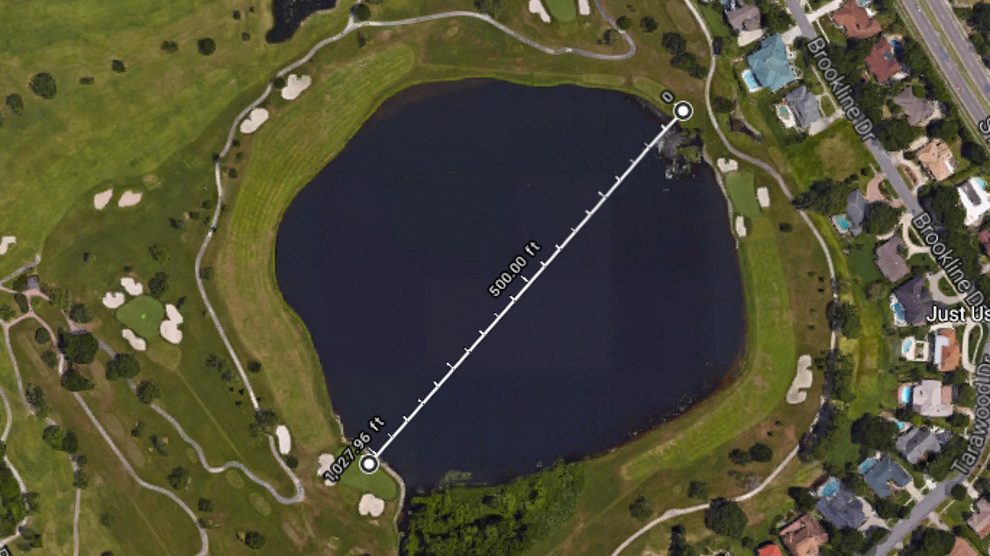 It was earlier in February that golf-ball-crushing, rules-arguing, Kyle-Bershire-admiring, frontal-lobe-straining, protein-shake-chugging, U.S. Open-winning, distance-obsessing Bryson DeChambeau gave thought to driving the green on the sixth hole at Bay Hill, site of this week’s Arnold Palmer Invitational.

It is a pure “Cape-Hole” design where you can basically pick how much of the lake you want to challenge off the tee.  John Daly went for the whole enchilada back in 1998, tried to drive the green and ended up with an “18” on the par five hole.

“No. 6 at Bay Hill is one of those I’ve been eyeing. I think I can do some pretty cool things on it,” DeChambeau said in his quest for more and more distance off the tee.

Defending champion Tyrrell Hatton was amused at the thought.  “It would be some effort,” Hatton laughed. “I know that’s not anywhere near my locker. If he can do it and he pulls it off in tournament — fair play to him.”

It would take a carry of a tad more than 342 yards to clear the lake.  In the picture with this article, the tee box is top right in the aerial photo and the straight line shows a carry of 1,027 feet — 342.33 yards to be exact.  “There’s not really a bailout. It would take a very brave man to do it and it would be interesting to see if he can pull it off,” Hatton said.

Evidently Bryson could be having a total change of heart.  At last week’s WGC event at The Concession Club in Bradenton, he had a tough time with his misses with the driver.  And DeChambeau went on record and said:  “Strange things can happen at 200 miles per hour.”

He went into more detail on site last week:

“Nobody knows how to play a 200-mph ball speed and barely mis-hit it; sometimes it doesn’t react the way you think it should,” said DeChambeau who finished tied for 22nd last week at The Concession, shooting rounds of 77-64-72-69.  “So we’ve got to figure that out. We’re doing a good job, and in a couple weeks I’ll have some interesting stuff that will hopefully help mitigate some of those errors at high speeds so I can swing it fast again.”

After his 77 last Thursday, DeChambeau went with more three-woods and irons off the tee.

With The Players next week and The Masters next month, Bryson said he’s now paying more attention to risk with the driver.  “I’m very risk-averse. I don’t really care. I want the best now for myself.  And if it doesn’t work out, then I can cross that off the list.  It’ll help me progress quicker for next year’s Masters, or this year’s Masters.  I don’t want to wait and test it.  What if it works tomorrow, and it’s an amazing benefit for my game?  That’s what I look at it.  And over the course of time, I’ve become more risk-averse because of it.”

Editor’s Note:  DeChambeau tried it twice during his Wednesday practice round and both efforts came up short, the wind wasn’t helping enough.  If there’s more of a helping wind during the tournament, he might try it.

For the first time in 2021, the LPGA Tour will play on back-to-back weeks.

The manicured Golden Ocala Club is the site for this week’s Drive-On Championship with the winners from the first two events — the Korda sisters (Jessica and Nelly) trying to make it a Korda-Korda-Korda winning start.

One of the really cool things about Golden Ocala is the number of “replica” holes — holes modeled after some of golf’s most famous/iconic holes from around the world.

There are eight of them:

This is a first-year event for the LPGA Tour, a first-ever look at Golden Ocala.

Morgan Pressel may be nearing the end of her playing career.  NBC Sports has announced that Pressel has joined GOLF Channel and NBC as an analyst and on-course reporter for LPGA Tour and PGA TOUR coverage. She will make her 2021 on-air debut this week at the LPGA Drive On Championship at Golden Ocala.

She’ll be working other events including the U.S. Women’s Open, the Evian Championship, Solheim Cup, and the PGA TOUR’s Honda Classic.