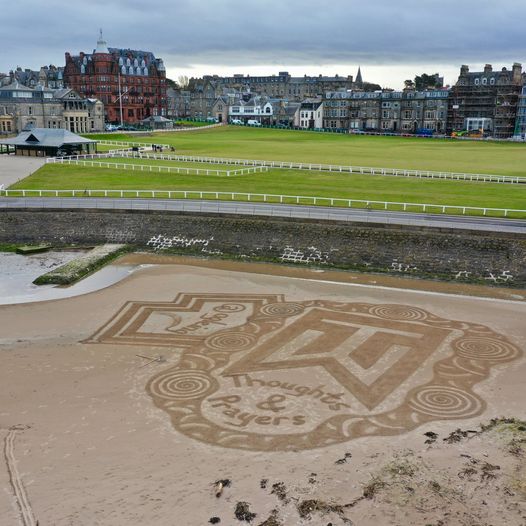 A giant trilbute/get well for Tiger Woods on the West Sands next to the Old Course at St. Andrews.

Tiger Woods has climbed incredible mountains of accomplishment and comeback during his brilliant career.  Today, he is a patient at Harbor-UCLA Medical Center, recovering from some very, very serious surgeries and fortunate to still be with us.

There are still plenty of questions regarding his devastating rollover vehicle crash early Tuesday morning outside Los Angeles on his way to a film session for a Discovery Channel/GOLFTV/Golf Digest project.  He has a monster financial deal with those entities and this project was part of his obligation.

The first thing everyone needs to do is cease and desist with this talk of Woods returning to play competitive golf.  With the severity of his injuries, this latest mountain is of Mt. Everest caliber.  He has a long way to go simply to walk normally again.

Tiger’s right leg was basically mangled in the end-over-end crash down a steep embankment in an L.A. suburb and Dr. Anish Mahajan, chief medical office at Harbor-UCLA said that Tiger suffered “comminuted open fractures to the upper and lower sections of his right leg as well as significant trauma to his right ankle.  Mahajan said that the surgeons inserted a rod, screws and pins to stabilize the leg.”  Actual number of hours the surgery took varies depending who you listen to.  Steve Sands from the Golf Channel reported 10 hours, which seems high, other sources have reported it was more like five hours.

Length of the surgery aside, biggest issue going forwards is that badly damaged ankle.  There are seven bones in the ankle called tarsals — the Talus, the Calcaneus, the Navicular, the Cuboid and three Cuneiform.

No telling how many screws and plates it took to repair those.  In all, Tiger’s right leg and ankle came out of this crash in bad shape.  What few are considering is how impacted was his already fragile and still-healing spine.

“It (Woods tibia) has been fixed by something called an intramedullary nail, because the bones are like tubes and you pop a rod down it, stabilize it, it’s a very, very stable way of fixing it.”

“The other thing that’s important is he had something called compartment syndrome.  It’s basically when muscles are injured and crushed – they swell.  Muscles in the body are actually incapsulated in sacks, which are not particularly flexible so it doesn’t allow the muscle to swell beyond a certain volume.  Of course if you can’t swell out, what happens is that it just squeezes the muscle to a point where blood can no longer flow in the muscle and it causes muscle death.

“If you look at foot injuries, they are the things that determine the long-term prognosis,” she continued.  “Generally foot injuries with complex tibial fractures, if you compare them to just tibial fractures, they can carry a worse prognosis.  So I think my prediction would be that the tibia may not necessarily be the thing that causes problems whereas the foot invariably does.  So the foot injuries are what will determine the future outcome and the reason for that is because bearing load on the foot, which is painful, it has two profound issues:

“One is that it’s a psychological short circuit to the trauma so people don’t like it because it just reminds them of the injury.  The other thing is that if you have pain, you can’t really exercise so running, jogging and being able to do sporting activities will be much more affected by foot injuries more than anything else.  Foot injuries are different. They really have a profound influence on quality of life.”

Then there are the muscle problems:

“The problem with the muscle injuries is that some of the muscle is undoubtedly very injured. It will become scarred,” the British surgeon added.  “Scarred muscles will become weaker and to regain the strength in these muscles again requires a huge amount of effort.  Not being able to bear load through the foot initially means that he will lose some muscle bulk.  There is a variety of ways that you can maintain the muscle bulk through physiotherapy and he would have access to the absolute latest technology to do that.  But there is no doubt that you will lose fitness, you will lose muscle strength, you will lose balance on that leg and regaining those through rehabilitation and physiotherapy is what takes the longest time.”

With that in the books, back to Tiger in his hospital room.  He’s may be stuck on the west coast for quite a while.  You cannot fly after serious surgery, or any surgery for fear of possible blood clots.  Once he’s discharged from the hospital, he’ll have to enter a big-time rehabilitation facility.

At the end of the day, it’s nearly impossible to predict how long it will take for Tiger to simply walk normally again.  It’s totally inappropriate to speculate on him returning to elite-player form.

Tiger did not look good on Sunday when he spoke to Jim Nantz during the final round of the Genesis.  He didn’t sound optimistic either.  And that was regarding his back surgery rehab.  There’s no telling the long-term effect on his back, which has been repaired five times.

Truth be known, it’s going to be a really long time before we even hear from Tiger Woods, much less see him.

As far as winning again on the PGA Tour?  Let’s be very real here.

That shouldn’t even be in the discussion.  And please stop with the Hogan accident comparisons.  Ben never had five back surgeries before his accident, nor any other physical issues for that matter.

Tiger’s physical health and future in that aspect is cloudy, very cloudy at best.

Let’s just hope he can eventually walk freely, get around without issue and maybe one day be able to play golf with his son, Charlie.

And that in and of itself would simply be wonderful.

Editor’s Note:  Late Wednesday, Tiger was transferred from Harbor-UCLA Medical Center to Cedars-Sinai Medical Center where he’s expected to remain for at least a week.