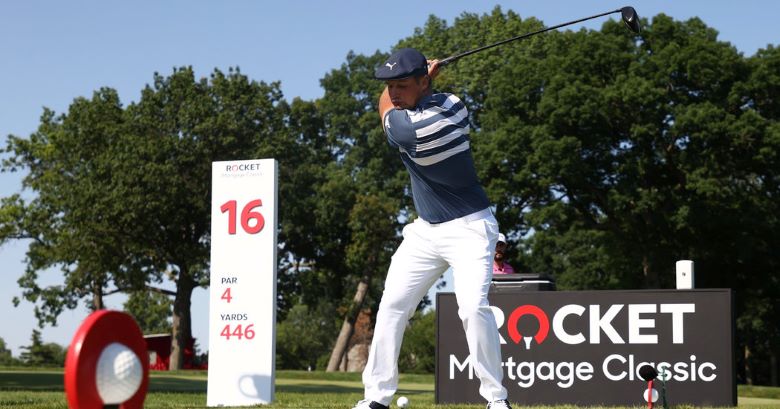 With his mind-boggling distance off the tee, how will Bryson DeChambeau fare in the majors?

It has always been easy to be skeptical when it comes to Bryson DeChambeau, who looks like he’s becoming a major disruptor on the world golf stage.

First, it was easy to be skeptical of a guy who decided that all his irons would be the same length — the guy’s got a bag full of six-irons, for goodness-sakes.

Second, it was easy to be skeptical when he put those monster fat grips on said irons.

Third, Bryson, the degreed physicist, has made a trip around the golf course one big mathematical permutation and it’s easy to be skeptical about that approach.

Fourth, the guy was slow as molasses in the winter-time and it was easy to shake one’s head over his snail-like pace of play.

Now if all that isn’t enough, add the fact that he found Dr. Frankenstein’s lab out in Colorado and somehow managed to add about 35 pounds to his frame, making him look like he should be an enforcer for Don Corleone.

Okay, if that’s not enough, he was bound and determined to get to the 200 mile-per-hour ball speed mark with his driver.  With drives hitting the 370-mark, he’s ready to check that one off his list of weird science.

Despite all of that weird science, no player has been better on the PGA Tour since it re-started after the COVID-19 break.  If you had to vote for the best player in the world, today, right now, forget about two-years of data for the Official World Golf Rankings, well, you could easily say it is Bryson.

Bryson could have won at the Schwab Challenge (finished tied for third);  he tied for eighth at The Heritage; tied for sixth at The Travelers then won last week in Detroit.  Just to refresh everyone’s memory, his finished tied for fifth at the Genesis last February then finished solo second at the WGC-Mexico then fourth at the Arnold Palmer Invitational.

During the COVID break, this guy comes back looking, well, like a guy ready to test the 400-yard mark with his driver.

“Obviously he has too much time on his hands,” quipped Kevin Kisner, who finished solo third behind DeChambeau and Matt Wolff in Detroit.  “He needs some kids or something,” Kisner added with a wry smile.

Then Kisner pretty much summed up what most were thinking after watching DeChambeau over-power the Donald Ross layout at Detroit Golf Club.  “He’s changed the entire way the game is played.  It’s just amazing, it’s fun to watch,” says Kisner.

What DeChambeau is doing on the golf course defies conventional thinking.  His golf ball seems to defy gravity when it rips off his driver-face and stays in the air for eight-plus seconds.

DeChambeau is finally taking a week off but he’s got something in mind.  He’s heading back to Colorado and hints that he may explore the possibility of, get this — adding even more weight and bulk to that frame of his.

Well, it’s good news for the rest of the field at Muirfield Village that he’s finally taking a week off.  No one has to go through the agony of getting out-driven by 50, 60 and sometimes 70 or more yards.

Bad news is he’ll be back in another week to see what he can do with Jack’s course up there at Muirfield Village.  Jack may want to think about getting that rough up to six inches — you gotta do something to slow this guy down.

Which brings us to the three, not four majors, that will still be staged this year.

How will Bryson handle Harding Park in San Francisco?  Can he over-power that esteemed layout.

What about Winged Foot?  You gotta think the starched shirts at the USGA are huddled right now, talking about this guy and his length off the tee.

And then there’s Augusta National.  Back in 1997 a very young Tiger Woods absolutely over-powered “The National.”  He was hitting wedges into par fives and sand wedges into some of the longer par fours.  Sound familiar?  Woods shot a record-setting 18-under par with rounds of 70-66-65-69.  If you’re old enough, you might recall he shot 40 on his opening nine that year.  Augusta National then undertook a mission to “Tiger-proof” the course.

It has held up well but now there’s this guy, this DeChambeau guy.

What he’s basically done is figure out a lot of stuff that probably didn’t cross anyone’s mind when it comes to this game of ours.

Face it, he’s a total disruptor.

Which brings us back to the majors.

Will Bryson and Bulkamania run wild?

Tough question but then this guy has done it his way, every step of the way.  He’s broken all the rules and given the golf world something different.

And man, is it different!