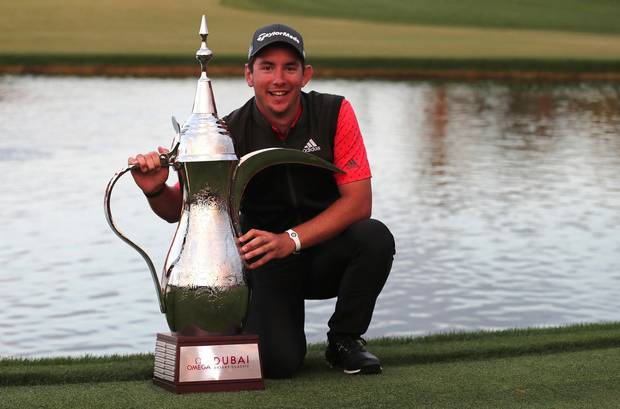 The new bulked-up version of Bryson DeChambeau had a great opportunity to repeat Sunday at the Dubai Desert Classic.

He was tied for the lead at nine-under par with five holes to play, three of them nice birdie opportunities.  But there would be no closing birdies for the “Mad Scientist” from the PGA Tour.

Instead, DeChambeau went totally off kilter and finished with four straight bogeys, a head-scratching turn of events that make you wonder if his game disappeared with his new 25-30-pound weight-gain.

After a nice two-putt birdie at the par five 13th and a par at 14, his tee shot at the 200-yard par three 15th sailed 20 yards right of the green and he’d miss from 10-feet for par.  At 16, he short-sided himself with a nine-iron and couldn’t get up-and-down from the thick greenside rough.  At the drive-able par four 17th, he was just 10 yards right of the green, once again in the thick rough and he looked like a 16-handicapper, taking three shots to finally get on the green and make bogey.

At the par five 18th, he went for the green and watered his second, finishing with yet another bogey that dropped him all the way back to five-under and his 76 gave him a tie for eighth.

While DeChambeau fell apart, Aussie Lucas Herbert and South African Christian Bezuidenhaut warmed up on the range, readying themselves for a playoff as both finished at nine-under.

Bezuidenhaut missed his chance for an outright win when he dumped his third into the water at 18 then made a stunning 20-footer for bogey.  He then watched Herbert birdie 18 to tie him at nine-under.

The first playoff hole saw Herbert hit what he called “my worst shot ever,” when his three-wood second sailed 70 yards right and splashed into the middle of the large greenside pond.  Bezuidenhaut had laid up but was too conservative and hit his third well past the hole, 30 feet.  Herbert hit from the drop area and stuck a wedge inside three feet and the two would have the first playoff hole with pars.

It ended the second time down 18 when Bezuidenhaut’s second sailed long, over the green and then from just 189 out, Herbert hit a beautiful second inside 20 feet.  Bezuidenthaut’s third from the thick grass in the drop area left him 20 feet short.  He’d miss and Herbert’s easy two putt gave the Aussie his first-ever European Tour win.

“It’s the best thing ever, it’s so good,” Herbert said afterward.. “We’ve got a bottle of scotch at home to celebrate back in Australia so I can’t wait to get into that with the boys.”

He also had his countrymen in his mind as Australia continues to battle against bushfires that have brought havoc and tragically claimed lives.

“There’s some pretty average stuff happening in Australia right now with the fires and Cam Smith said it a couple of weeks ago when he won, everyone around the world is behind us and hopefully we can keep fighting harder than what I did on that first play-off hole,” Herbert said.  “That’s nothing compared to the firefighters and volunteers that are putting out the fires so I’m sending all my love back home.”

In the end, this one had a different leader after every round.  The Emirates Golf Club, with its winds, high rough and narrow fairways, went from last year’s winning 24-under score to this year’s nine-under victory total.

Madelene Sagstrom found herself locked in a head-to-head duel with Nasa Hataoka Sunday and in the end, it turned out to be a shocker at the Gainbridge LPGA Championship.

The two players came to the par four 18th at Boca Tica, deadlocked at 17-under par through 71 holes.  Hataoka put the pressure on Sagstrom when she hit her approach to 20 feet while Sagstrom’s second left her short of the green with a long pitch in front of her.  She hit a great shot but still found herself with seven feet for par.

Hataoka, who lost in a playoff last week to Gabby Lopez, stared down her makeable birdie putt.  She missed and saw it run four feet past the hole.

Sagstrom, a former LSU player from Sweden, looked cool and calm as she rolled in the tester for par.  She then stepped back and watch Hataoka line up her putt to send it to a playoff.

Hataoka, who putted well all afternoon, missed her par putt and Sagstrom had her first career LPGA win.

Sagstrom survived a rough front nine, where she shot 37 but she rallied with birdies at 10, 11 and 17 then holed the big par putt at the 18th for a closing 70.

“It doesn’t matter how you start,” Sagstrom said. “If you just continue fighting, things can go your way. And I just told myself, `Keep fighting, keep fighting.'”

She said she’s drawn a lot of inspiration from LSU’s national football championship.

“I couldn’t have been more happy,” she said of the Tigers’ championship.  “It inspires me to do well out here.”