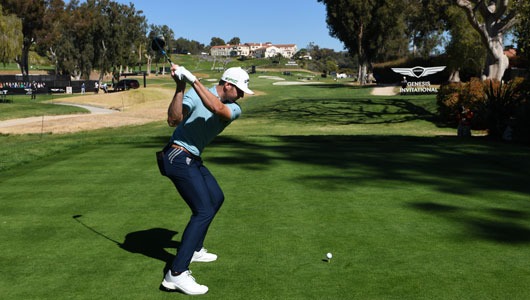 Sam Burns saw his lead shrink from five to two shots in the two-day third round.

It took two days to complete the testy, windy, chilly third round at the Genesis Invitational but Sam Burns still clings to a very fragile lead.

Burns started the third round with a fat five-shot lead and was forced to wait four hours to start his day on Saturday after high winds forced a halt to play before he teed off.

The players finally got back on the course with most of the contenders forced to finish the third round early Sunday morning.

Three back nine bogeys from Burns opened the door to a host of challengers for the final 18 holes, including world’s No. 1 Dustin Johnson.  Burns finished with a 74 and fell back to nine-under, two ahead of Johnson, young Matt Fitzpatrick and Max Homa.  Johnson finished with an even par round of 71, Homa 70 while Fitzpatrick was the best of the top four with a two-under par 69.

A half dozen players were in at five-under par including Patrick Cantlay, the biggest threat at those who are four back.  Cameron Smith (71), Tony Finau (70), Alex Noren (71), Taylor Gooch (69) and Matt Jones (69) were there with Cantlay.

The players who didn’t finish on Saturday were forced to get up well before dawn to ready themselves for the cool air and lesser breezes than the gusts that caused nothing but havoc on Saturday.

There were few if any birdies among the contenders to finish the third round, it was a matter of survival.  Tyler McCumber fell totally out of contention thanks to six bogeys on the final nine.  He shot 41 coming home for 77 that dropped him from seven-under to one-under.