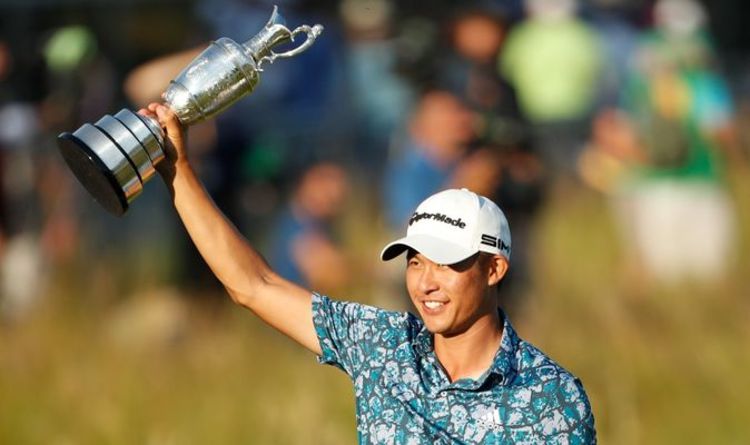 Collin Morikawa would be the first American to capture "The Race."

We haven’t seen the talented Collin Morikawa since he finished T7 at the Zozo more than three weeks ago.

The reigning Open champion, holder of the wonderful Claret Jug is heading over to the sands of Dubai where he’ll give a go at becoming the first American to walk away with The Race To Dubai, which is the Euro version of the FedEx Cup.

After getting squashed in the Ryder Cup, it would be yet another indignity for the guys on the other side of the pond to have an American take their Tour’s biggest title.

First the Euros got the bad news that one of the primary faces of their Tour, Jon Rahm, basically thumbed his nose at participating in this week’s DP World Tour Championship.  Sorry lads, Rhambo’s a daddy now and money just isn’t that great a motivator when you’re as flush as the world’s No. 1 is.  At least they’ve still got Rory, as in McIlroy, the other significant face of their Tour, which, by the way, becomes the DP World Tour come January 1.

If Collin’s not up to the task, then there’s spunky Billy Horschel, who sits No. 2 in the Race To Dubai rankings, just ahead of the “I’m not showing up” Jon Rahm.  Testy Tyrrell Hatton, who doesn’t hesitate to throw a quick tantrum following a sloppy golf shot, is fourth on that list while Min Woo Lee, brother of LPGA Tour’s Minjee Lee, checks in at fifth.

To find Rory, you have to drop down to No. 20.  Truth be known, Rory’s no stranger to the Jumeirah Golf Estates there in Dubai.  Rory was their playing ambassador in his early years on Tour.  Last week the European Tour played the Fire course at the complex and Joachim B. Hansen was the winner.  This week’s stage is the more difficult Fire course.

This one should make for some good watching for early risers.  It’s an all-star cast minus Rahm and doesn’t compete with football viewing time on the weekend.  Certainly more compelling than the bare-bones field at the PGA Tour’s 2021 year-ender — the RSM at Sea Island.

Abraham Ancer is ninth on the Race To Dubai points list and he’s traveling across the Atlanta as is Will Zalatoris (No. 11).  Back in the U.S., perhaps the talking heads can tell us which high-potential player will win first — Zalatoris or the Sunday-fading-from-contention Scottie Scheffler.  Scheffler’s at Sea Island to see if he can conquer that field of mostly Korn Ferry graduates and other outliers.

Anyway, back in Dubai, it should be a nice event.  Plenty of talent and a superbly manicured golf course.

They do things right in Dubai.

After all, they’re not the Saudis and that’s a good thing.

Last week’s field at the Houston Open wasn’t much to brag about.  It was so lame that the Champions Tour’s season-ending Charles Schwab Cup championship outdrew the regular tour for television viewers.

The field at this week’s final stop for 2021 is the RSM Classic at Sea Island and it’s hardly a classic field.  There’s one player from the world’s top 10 and that’s Louie Oosthuizen.  Last week Scottie Scheffler threw up all over his Foot-Joys on the back nine at Memorial Park and watched Jason Kokrak take the Houston Open with four straight back nine birdies.  That’s how it’s done, Scottie.  Scheffler’s one of the “name” players in the field this week.  Fellow Ryder Cupper Harris English lives at Sea Island so it’s no surprise that he’s in the field.  Webb Simpson is playing, so is Adam Scott.

If you want to look at a guy who’s strong enough to win this week, it’s Aussie Cameron Smith.  Another guy with proven victory moxie is Kevin Kisner — he’s in the field as well.

Tiger Woods Sighting In L.A. — And He’s Walking Around Unaided:

Leave it to the folks at TMZ to not let it go unnoticed that Tiger Woods is ownself was spotted at an L.A. hotel this past Sunday evening, walking unaided, accompanied by gal/pal Erica Herman.

Woods was most likely in town to celebrate the 25th anniversary of the Tiger Woods Foundation.

TMZ’s video shows Tiger walking, albeit with a bit of a limp — but what would you expect?  El Tigre is still rehabbing from some serious surgery from his car crash last February.