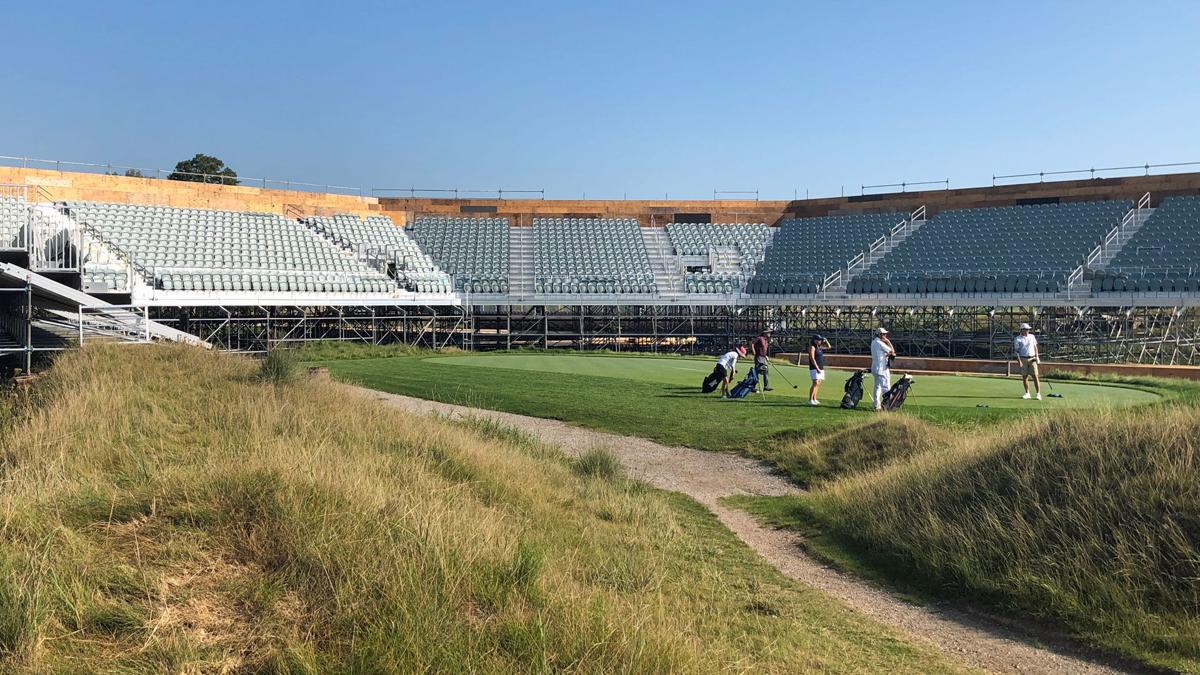 The grandstands at Whistling Straits are up and ready to be filled with screaming fans.

Seems Davis Love III firmly believes that the “Folly In France” — aka the last Ryder Cup matches where the good old USA was absolutely buried by Europe, came about because the European team was better prepared to handle the challenge of Le Golf Nationale outside Paris.

“They had us over a barrel in Paris because we didn’t have enough practice rounds,” Love said. “The other team knew the golf course way better.  We’re going to focus on breaking down the course (Whistling Straits) over the next couple of weeks until we get there. It’s important for us to gather local knowledge and pass it on to the guys that don’t have the intimate knowledge as guys like DJ.”

With that in mind, Captain Stricksie (aka Steve Stricker) is bringing his Dirty Dozen up to ‘Sconsin this weekend for fun and games at Whistling Straits and maybe they’ll have time to figure out just how bad Brooks Koepka hurt that fragile wrist of his.

All players and caddies for the U.S. team will be there.  While some U.S. players, including Dustin Johnson, Brooks Koepka and Jordan Spieth, have played Whistling Straits, the majority of the team, notably Collin Morikawa and Bryson DeChambeau, have not.  Whistling Straits hosted the PGA Championship in 2004, 2010 and 2015 so many of the older European players have seen it multiple timse.

“My message from day one has been to try and out-prepare the other team, the European team, and for me it’s been that way throughout my career, just trying to prepare the best as I can going into events,” Stricker said. “So, let’s get in as much practice as we can here, maybe take a little bit of the stress of Ryder Cup week off our plates by getting our work done now, earlier than Ryder Cup week, and get some rest that week.”

Stricker may be sending certain players out together as he tries to blend hopefully successful U.S. pairings for best-ball and alternate shot.  This is the biggest pre-Cup scouting trip ever by a U.S. team.

Also, there’s no truth to the rumor that Dustin Johnson will be conducting a bunker-identification clinic for his Ryder Cup teammates at Whistling Straits.

Did Tiger Woods Have Any Input?

Steve Stricker has Tiger Woods on speed dial in his cell phone contacts and Captain Stricksie admitted that he’s been in touch with the convalescing Woods.  News of that sent any and everyone clamoring for an “update” on Tiger’s condition and his rehab progress.

Captain Stricksie was pretty vague but offered this:

“I’ve talked to Tiger a lot.  He’s a part of this Ryder Cup family; he won’t be able to be a captain’s assistant this time around just because of his ongoing rehabilitation to try to get better and try to play golf again, and that is going well. He’s progressing, he’s doing well, things are moving in the right direction.”

Thank-you Captain Stricksie.  Would you have love to have been listening in when Stricksie asked Tiger about Reed as a captain’s pick?