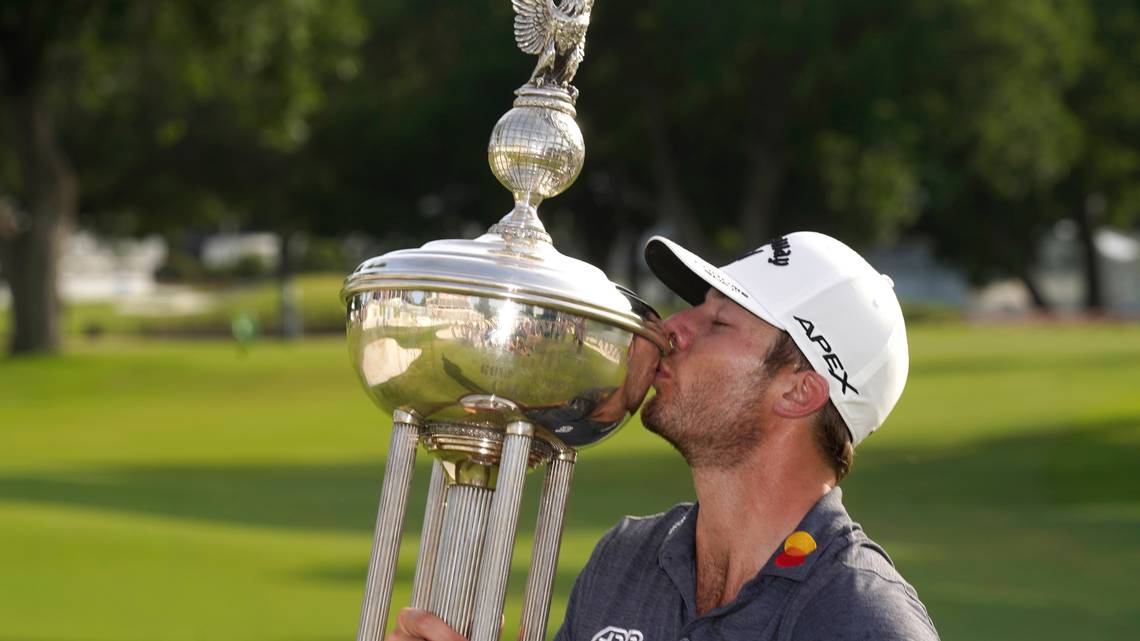 Posted By: Tom Edringtonon: May 30, 2022In: PGA Tour NewsNo Comments

The U.S. Open is still 17 days away but one broke out on Sunday at Colonial Country Club, turning the final round of the Schwab Shootout into a total free-for-all from which Sam Burns eventually emerged.

For the second straight day, winds blew 20-30 miles per hour with gusts that drove nearly everyone, including world No. 1 Scottie Scheffler, into a bogey-riddled afternoon of golf mistakes.

Scheffler started the day with a two-shot lead at 11-under par, Burns was a whopping seven shots back, just as Justin Thomas was last week at the PGA.  With players falling apart over the final nine holes, Burns finished at least two hours ahead of the leaders with a hard-to-believe five-under par 65 that left him watching comfortably in the clubhouse as chaos broke out later in the afternoon.

By the time the final pairing of Scheffler and Brendon Todd came to the 18th, Burns had already headed out to warm up for an impending playoff.  Scheffler was at nine-under and lucky to be there after he blew a birdie putt nine feet past the cup at 17.  The way things were going, he stood a good chance of missing the par putt.  He didn’t.  He made it along with other determined saves but without a birdie on his card, he signed to 72, finished nine-under and headed back out for a playoff with Burns.

It didn’t last but one hole.  Burns’ momentum didn’t go away, even after the long wait.  With Scheffler on the 18th green about 35 feet away, Burns stood over a 38-footer from the back fringe.  He hit it perfect and scored his eighth and most important birdie of the day after Scheffler missed his and stayed birdie-less for 19 holes.

Burns watched the finish develop and was happy he was done and in at nine-under.  I did not envy them while they were out there playing,” Burns said. “Didn’t feel like it was blowing any less than we were out there, it was just one of those things when you finally finish, you’re just ready to be done.”

Davis Riley found himself at 11-under par after making a birdie at the par five 11th to take the lead.  But the rookie had two bogeys and a double over his last six holes to fall back to seven-under.

At one point five players were tied at 10-under par.  Poor Harold Varner III was one of them but after making par at the 11th to stay 10-under, he went triple-bogey, double-bogey, triple-bogey on his way to shooting 10-over par for the final seven holes.  He shot 78 and fell all the way back to even par and a tie for 27th.

Brendon Todd was 10-under at the turn but two-bogeys and seven pars left him a shot short (eight-under) of the playoff.  He shot 71.

Scott Stalling was in the same boat.  He finished with 72 and was finished at seven-under with Riley and Tony Finau.  Finau’s 67 was the day’s second-best round.

Burns won for the third time this season and Scheffler was denied his fifth win in 10 starts.

“With the gusts as high as they were, it was really difficult to putt them (the greens). But I gave myself a lot of looks. I just didn’t have it today,” Scheffler said. “Props to Sam. He played great.”

Mito Pereira Gets A Top 10:

Mito Pereira backed up his great play at the PGA last week with another solid week at Colonial.  Pereira shot 71 on a difficult day Sunday and finished tied for seventh at five-under par.

He was in there with pre-tournament favorite Jordan Spieth (70) and defending champion Kevin Na (69).

Sam Burns won just north of $1.5 million on Sunday and now he’s passed the $6 million mark for the season but that pales in comparison to Scheffler, who passed the $11 million mark (($11,215,187) thanks to his four victories and two runner-up finishes.

Burns tied the largest comeback in the event.  Nick Price came from seven back in 1994.